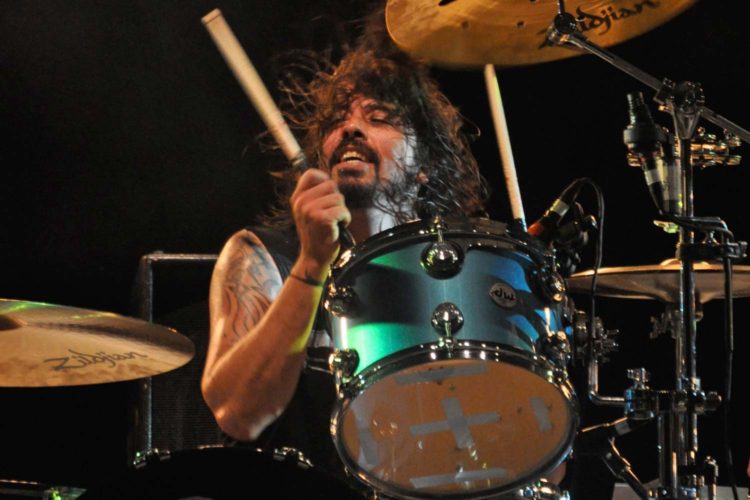 Fun fact: Dave Grohl got me kicked out of the middle school jazz band.

Growing up as a drummer, Grohl was one of my heroes. I gravitated toward his thundering playing style, bashing away at the drums as if they owed me money. So on my first day of rehearsal — during the first song, in fact — when my solo section came up, I proceeded to beat the living shit out of the drums, just like Grohl would do. There is a time and place for this, but that place is probably not jazz. I was politely asked not to come to the next rehearsal.

But even taking this into account, the affect Grohl’s had on drummers (including hobbyists like me but especially tons of talented ones) is immeasurable. From his immensely influential work with Nirvana to his sound-defining fill-in roles with bands like Queens of the Stone Age, Grohl over the years has destroyed many eardrums and pissed off many more neighbors (and jazz band directors; sorry, Mr. Behrens) and it’s time for it to be recognized Bozho-style.

Before Grohl and his current gig, a little band called the Foo Fighters, make the Kohl Center’s stage their home tonight — thus turning it into the Grohl Center — here are a few of Dave Grohl’s finest moments behind the kit.

While the adrenaline-shot lead-in of “Smells Like Teen Spirit” may seem like a better choice, the powerhouse tom-beats of “In Bloom” is probably the best introduction to Grohl’s playing style. Nevermind changed music in a lot of ways, and chief among those is inspiring drummers not to hold back when playing. Nirvana’s sound was built on emotional aggression, and Grohl’s driving backbeat provided the perfect rage to Kurt Cobain’s more delicate and subdued musical moments.

Shortly after Kurt Cobain’s suicide effectively ended Nirvana, Grohl reemerged as frontman and guitarist for Foo Fighters, a poppier alt-rock project that wound up turning the drummer into a household name in his own right. But until Taylor Hawkins joined the band in 1997, Grohl handled much of the band’s drumming duties. That means he recorded several songs on the band’s watershed 1997 LP, The Colour and The Shape. Among those is “Everlong,” one of the Foos’ signature tunes, an emotionally bare ripper Grohl wrote about his former girlfriend, Louise Post, vocalist/guitarist of ’90s rockers Veruca Salt. And with its sonic unpredictability, switching from soft verses on the hi-hat to that mega-huge chorus, Grohl is able to steer “Everlong” in whatever direction his own feelings call for.

Queens of the Stone Age: “No One Knows”

When it came time to record their third album, stoner rock hell-raisers (and future Breese Stevens performers) Queens of the Stone Age found themselves without a drummer. So frontman Josh Homme did what anyone in his position would do and called up his old buddy Grohl, who actually put the Foos on hiatus to join Queens. (For the record, this was a trying time for the Foos thanks to the simmering animosity between Grohl and drummer William Goldsmith, as laid out in the documentary Back and Forth.) The resulting collaboration was 2002’s Songs for the Deaf, a Grammy-nominated instant classic that included what’s not only one of QotSA’s best known songs but also one of Grohl’s best drum performances: “No One Knows.” With choruses filled with intricate fills spliced with driving rock beats, Grohl plays the drums like a guitar on “No One Knows,” peeling off blistering solos and pretty much showing Homme up on his own track. And that’s no easy feat.

Songs for the Deaf would not be the last time Grohl and Homme joined forces. Grohl filled in for Queens again on 2013’s …Like Clockwork, but prior to that the pair formed an entirely new band called Them Crooked Vultures along with bassist John Paul Jones of Led Zeppelin (yes, that Led Zeppelin). With two of rock’s finest musicians there to pace him, Grohl turned in some of his best work on Them Crooked Vultures, the band’s lone album (so far?), specifically in the form of the funky “Scumbag Blues,” in which Grohl does a pretty killer impression of John Paul Jones’ former Led Zep bandmate John Bonham, expertly mimicking Bonham’s signature single-kick pedal groove.

I was going to include one of Grohl’s hilarious works with Tenacious D over the years, but the sheer weirdness of his Jimmy Kimmel Live! performance last week was too good to pass up. Dressed up as David Letterman — it was Halloween, after all — Grohl was filling in for Kimmel as host. He and guest Kristen Bell (dressed as Magnum, P.I.), performed a mash-up that combined Metallica’s “Enter Sandman” with that snowman song from Frozen that I’m too lazy to Google the actual title of, topped off by Grohl jack-hammering away on the drums, dressed as Letterman. Grohl has a long-standing reputation as one of the most light-hearted guys in show business in addition to being one of the most talented, and this clip helps cements it.