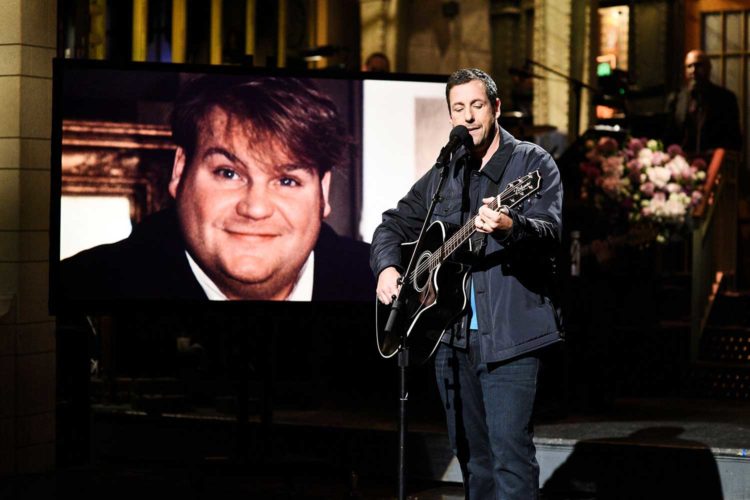 Quite a few former cast members have returned to Studio 8H to lead the show over the years. But Sandler, who was an SNL cast member from 1991-95, somehow had never done the honors. (Maybe because he was fired.) And while the episode did feature a few nods to Sandler’s tenure — Opera Man! — the undisputed highlight was his tribute to Madison’s own Chris Farley, who died in 1997.

Throughout the night, Sandler’s adeptness at musical comedy was on full display. But for the episode’s final sketch, Sandler took the stage with his guitar and sang a song about Farley that was both hilarious and unexpectedly moving. (A longer version originally appeared in Sandler’s recent Netflix special, 100% Fresh.)

Sandler shared an office with Farley (and Chris Rock and David Spade) at SNL, and he recalls the late comic as a guy who “hungover as hell… would still show up to morning mass” after a show. He sang about Farley’s permeating sweetness and the litany of classic sketches he appeared in.

But as with anything Farley-related, there was an undercurrent of sadness to it. Sandler remembers the pain of flying to Madison to bury him, and watching “Farl’s” father cry at the funeral. In a particularly stinging lyric, Sandler speculated they would likely be working together on Grown Ups 3 if Farley was still around today.

I never thought Grown Ups would make me cry, but here we are. Sandler clearly has trouble keeping it together during the song, and several cast members were spotted with stuff in their eyes during the good nights. But in the end, the song was a goofy, heartfelt celebration of a guy who dedicated his life to making others laugh.