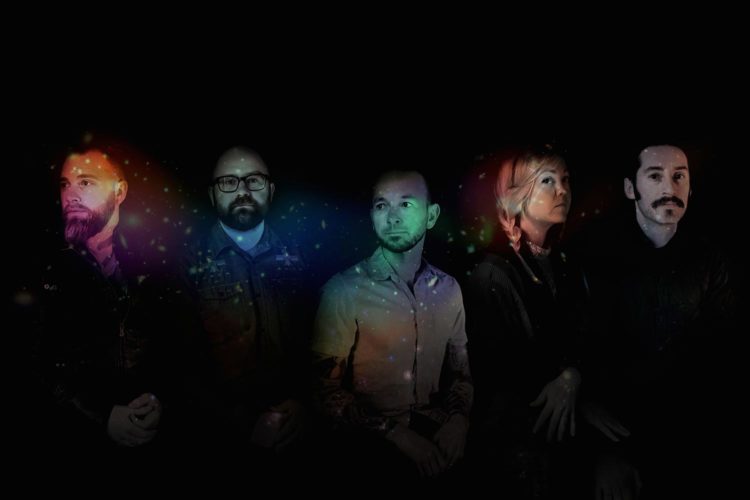 On their 2018 album The Other Shore, Murder by Death gets lost in space.

The Kentucky-via-Indiana band — who will perform at a sold-out Majestic Theatre on March 13 — has long been a fan of the fantastical, from their gothic imagery to their yearly pilgrimage to play the hotel that inspired The Shining. But their eighth record saw the group aim away from the dusty ground they’ve long covered to tell a story about literal star-crossed lovers. It’s a concept album about refugees of a destroyed Earth, trying to find a place in the vast cosmos.

“I love the idea of this long journey alone, hurtling through space, like, ‘Are they asleep? Are they dead? Are they gonna make it?” explains singer and guitarist Adam Turla, before adding with a chuckle. “These are the fun themes we address.”

Turla’s ominous baritone has been Murder by Death’s signature since he formed the band with his now-wife, cellist Sarah Balliet, in 2000. He’s spent most of his life addressing those “fun themes” he speaks of, tales about mortality and devils that have earned the band a devoted cult following. And to celebrate two decades together, Murder by Death is giving back with a tour built on fan-curated setlists that span the entirety of their catalog, form their quasi-punk beginnings to their current interstellar ambitions.

“Not everybody likes every album of ours the same,” Turla says. “But I’m amazed to see how every night, there are songs requested from every album. There seems to be a general respect for the whole body of work. As an artist, you can’t ask for much more than that.”

Ahead of their stop in Madison, I spoke with Turla about ghosts, skeletons and the real-life horror of trying to plan an album close to the 2020 presidential election. This interview has been condensed for clarity and brevity.

Murder by Death’s fanbase has always seemed very familial. Was that always your intention when cultivating a following, or did it kind of happen organically as more people found out about you?

It started from the fact that we were a DIY band. The first several hundred shows we played, I was booking them with the help of friends and local promoters. We were playing basements, pizza shops, VFWs… all that kind of stuff. From the beginning, we were kids playing music and looking for a place to play. We were sort of in it with the audience from the get-go. With the schedule we keep now, we couldn’t do anything like that anymore. What we can do is the sort-of concept shows we do, like at The Stanley Hotel. We’ve been doing this a long time, and there are people who have supported us the whole time and continue to show up and support our albums. We’re grateful, and this tour is an expression of that.

When did you guys start doing the shows at the Stanley Hotel? It’s such a cool concept not just to play there, but for a band like yours specifically to play there.

It’s the perfect site. We started having some really great shows in Denver in the late 2000s, and we had a good relationship with the promoter there. I had read a little blip about that hotel and the connection to The Shining. I was like, “Man, what a cool place to play a show.” There’s a fantasy element to Murder by Death. We’re trying to do something that’s not typical of a band and is more typical of movies or books or comics.

You’ve got a little room to get weird if you want to.

We try to play with the imagination a little bit. We work with a lot of artists to create the world of Murder by Death; the conceptual thing we’ve always wanted to do. We finally have the fan base and the resources to pull off those events. So I proposed the idea to a promoter to see if he could get us into that room, because no one had ever done shows there. We lobbied the hotel and did all these conference calls with the city. We’ve been doing five shows a year there for seven years now.

Since you’ve spent a lot more time within those walls than most people, have you had any otherworldly experiences at the Stanley?

Every year someone has a story. I’ve been around for a couple of fun, ghosty incidents. The concert hall where we play is, like, the most haunted area. And a lot of the production staff and the hotel staff — not just our people — do not want to be in the basement alone. There’ve been lightbulbs burning out where there’s only one in the room, or doors slamming out of nowhere in front of your eyes. Weird stuff like that.

I have to ask since ‘I Think You Should Leave’ is a point of obsession in my home: how did your cover of the skeleton song come together?

We are friends with journalist Dan Ozzi and his roommate Megan (Thompson), who directs music videos. She had the idea that we should cover this as Murder by Death. So Dan texted me like, “Hey, have you seen this, you’ve got to watch it.” I had already had one of my friends I grew up with say, “Adam, you have to see this song. You’re going to love it.” I watched it with Sarah, and we were like, “We can figure something out.” We had a show out in Joshua Tree, and Dan asked if he and Megan could come and film it. Right after soundcheck, we went out there, quickly learned the song and did a little shoot for no other reason than to be goofy. (laughs)

Speaking of “something spooky,” a lot of the writing on ‘The Other Shore’ is very spacey and psychedelic. How did you plot it out?

The writing process for that record was my favorite. I’d collect all my little ideas from over a year or two, and then I pared it down to a page each of these fragments of a song. And I’d sit down with a guitar and start piecing them together. Some of them were more fully developed in a sense of structure, and some were very spare because I wanted the band to fill in the gaps. It’s a little tough on the ego sometimes when you think you’ve got one, and then everybody’s like, “It’s fine.” (laughs) But if your bandmates aren’t excited about it, how do you get anyone else excited about it?

We talked about it earlier, but the premise of this band is a sort of fantasy universe. We had all been reading about space travel and Mars missions and reading sci-fi books. We’ve had spacey songs our whole career, but we never brought the lyrics into that context. This one was really fun. It was, “How do I write lyrics that are sort of about space, but could be taken not so literally?”

You’re looking back on 20 years with this band, which means you’re probably looking forward at the same time. What avenues do you still want to explore with Murder by Death?

Going into the summer, I’m going to start the process of compiling my ideas and start thinking about what I have and what’s next. In the fall we’ll probably start writing. I’m trying to leave our recording schedule open because honestly, my straight answer is that with the election in November, it’s such a crazy time to be living in this country and there’s so much polarization. I’ve got all these different songs that go all these different directions, and I want to see what I feel like and what the vibe is before I put a record out there without considering the context of everybody’s state.

You almost have to leave a disaster buffer, in case things go completely sideways.

I’m writing so much material that’s covering different ideas, and obviously you want your music to resonate with people. Right now, I feel lots of uncertainties with whoever I talk to. A friend in another band was like, “Let’s go overseas in November and tour somewhere else,” just so you don’t have to deal with the volatility of it all. I don’t want to rush a record out; I want to wait until it’s ready. And I don’t want to write in one direction and then everything changes and it doesn’t represent the next couple of years the way I’d want it to. I do like to think about external circumstances in songwriting, because you’re distilling your experiences and world around you into relatable material.

Murder by Death will perform at the Majestic Theatre on Friday, March 13 with the macabre, metal-influenced folk act Amigo the Devil.