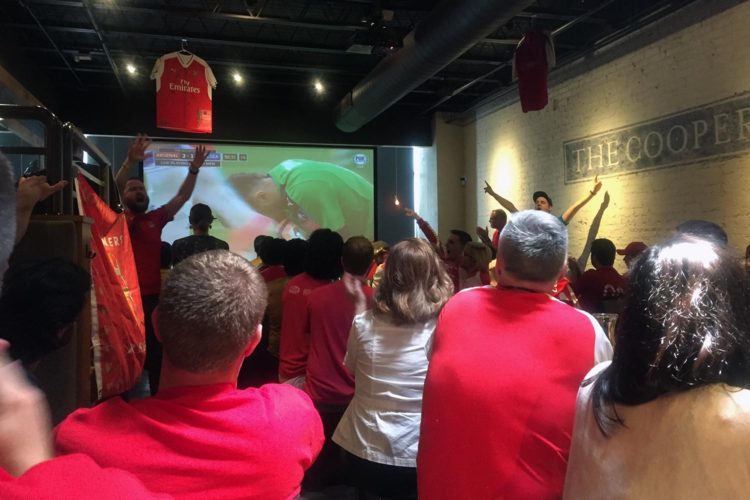 It’s 11:00 a.m. on a Saturday. The bar is packed with red- and white-clad sports fans, and the beer is already flowing freely. This must be the scene of a Badgers football game day, right?

Nope. These fans, it turns out, are here to watch… soccer.

Gathering almost every week upstairs at The Coopers Tavern, anywhere from 15-50 supporters of London-based English Premier League soccer outfit Arsenal meet to cheer on the club. The group has grown so large that it became officially registered in 2012 as one of more than 50 branches of Arsenal America, the official U.S. supporters organization for Arsenal.

For ASC Madison co-manager Andrew Schmidt, the evolution of the Madison club has been nothing short of a whirlwind journey. It wasn’t all that long ago he was watching Arsenal games at home with just a few friends.

“It started in my living room, 7 or 8 years ago,” Schmidt says. “[But] it got to the point where my wife was like, ‘You can’t be screaming at the TV at 6:30 in the morning anymore.’ So eventually we moved to an Irish pub on the west side, but we could only watch certain games there because of the early game times. More people started coming, and 2013 was our first season at Coopers.”

Schmidt and Liam Smith, ASC Madison’s other co-manager, now spearhead watch parties there for most Arsenal games each season. This commitment even includes some fixtures that start as early as 6 a.m., thanks to a six-hour time difference between Madison and London.

So what motivates them to do it each week, despite having to arrive well before sunrise on some cold Madison winter mornings?

“For me, not being from Madison, I found a Madison family,” Smith says through an Irish accent. “I found brothers and sisters here. Coming from Ireland, years ago … I can walk through [the bar] and say hi on a first-name basis to just about everyone. Ask them, how’s your sister, how’s your brother, how’s your friend.”

To say that the club is like family for Smith isn’t an exaggeration. His wife is also an ASC Madison participant, and Schmidt was the best man in their wedding.

“People come and they make lifelong friends that wouldn’t have known each other were it not for this club,” Schmidt says.

But the club — and its activities — extends well beyond Arsenal game days for its members.

ASC Madison is also an active volunteer organization. Since the club formed, it has raised over $100,000 for St. Baldrick’s, a non-profit aiming to find cures for childhood cancer. Just a few weeks ago, the club held an event that raised $1,500 for Planned Parenthood and the MS Society.

“Since day one, it has been a part of what we do,” Schmidt adds. “It’s been cool to see that grow with the club as well.”

Madison’s Arsenal supporters aren’t tied to their club by geographical location — a bizarre concept for many fans of Wisconsin sports. After all, Madison is 4,000 miles and one ocean away from Arsenal’s Emirates Stadium in North London.

As a result, their origin stories as Arsenal fans sound a bit different, and yet the bond to the club seems to run just as deep as any Wisconsin-born Packers fan.

“It’s kind of funny,” Schmidt says with smirk. “A lot of people joke about international soccer being the cool, hip new thing or whatever, and that people pick Arsenal because it’s the first on the list alphabetically.”

Schmidt picked up Arsenal in the early 2000s after becoming enamored with the World Cup, while Smith picked up the club during his youth in Ireland. Both were drawn to some of Arsenal’s mesmerizing players on display — Ian Wright, Tony Adams and Thierry Henry to name a few — in the same way younger Packers fans will remember growing up with legends like Brett Favre and Reggie White.

“These were invigorating, powerful dudes,” Smith says. “They were raw and you could see they had this kind of man-ness about them. They were giants of the game.”

On this particular Saturday morning, Arsenal faced bitter rival Chelsea — both sides equipped with some of the current giants of the international soccer scene — in a showdown for the FA Cup. A win would mean bragging rights for Arsenal over Chelsea for nearly three months until the new season starts up again in August.

For diehard Arsenal fans like Smith and Schmidt, this rivalry feels a little bit like that of the Packers and the Minnesota Vikings. Any result outside of a win for Arsenal would be hard to swallow.

“I’d be a little emotional (if Arsenal lost),” Smith said moments before the game kicked off. “I don’t like Chelsea. I like Arsenal. I want my team to win. I love this team.”

Ninety minutes later the final whistle sounded in front of the 90,000-person crowd at Wembley Stadium in London. Arsenal had clinched a 2-1 victory.

Nearly 4,000 miles from the live action, in a little bar in Madison, some of Arsenal’s most dedicated supporters erupted in jubilation.