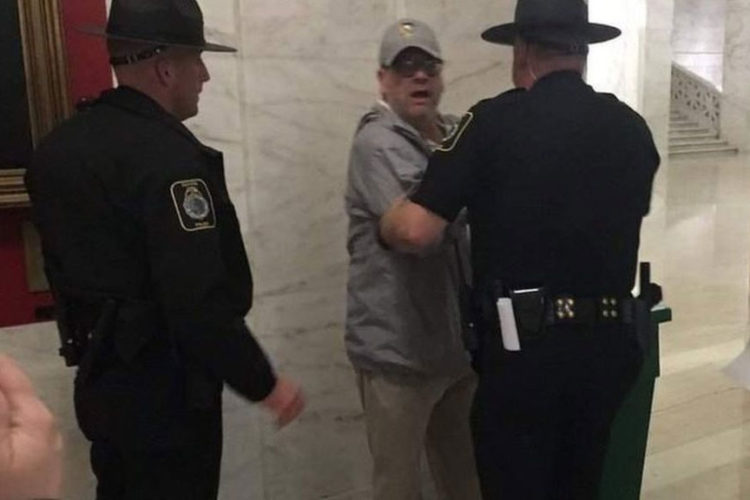 Because there’s nothing else happening in U.S. politics today, now feels like a great time to check back in on the status of our individual freedom under the Trump administration.

According to reports from several major news outlets, including The Washington Post, journalist Dan Heyman was arrested last night at the West Virginia Capitol while attempting to interview Health Secretary Tom Price. Heyman, who works for the Public News Service and has over 32 years of experience as a journalist, questioned Price repeatedly whether domestic violence would be treated as a pre-existing condition under the revised AHCA. Price declined to answer, always a good sign.

The American Health Care Act of 2017 (Trumpcare to the layman) was pushed through the House of Representatives last Thursday thanks in large part to the urging of Speaker Paul Ryan (R-WI), who totally doesn’t hate the poor and would like you to please stop bringing it up, okay?

The bill has been criticized particularly due to its broad view of what constitutes pre-existing conditions. The distinction is important in that, while not denying access to coverage, pre-existing conditions allow insurers to hike insurance premiums to amounts out of reach to many Americans. Heyman’s concern over domestic assault echoed the words of Congresswoman Gwen Moore (D-WI) in a statement she released after the vote.

Heyman recounted his arrest in a video posted by the West Virginia branch of the ACLU. He claims that he was not warned by Capitol police before suddenly being taken into custody, nor was he initially charged. Heyman was eventually released on a $5,000 bond after being charged with “willful disruption of governmental processes.” The charge makes sense if you accept the premise that holding elected officials accountable for answering questions to the public is not a normal part of the governmental process.

All of this is incredibly positive news for citizens concerned that the death of their First Amendment rights would be drawn out. Injustice may be painful, but at least it’s quick.