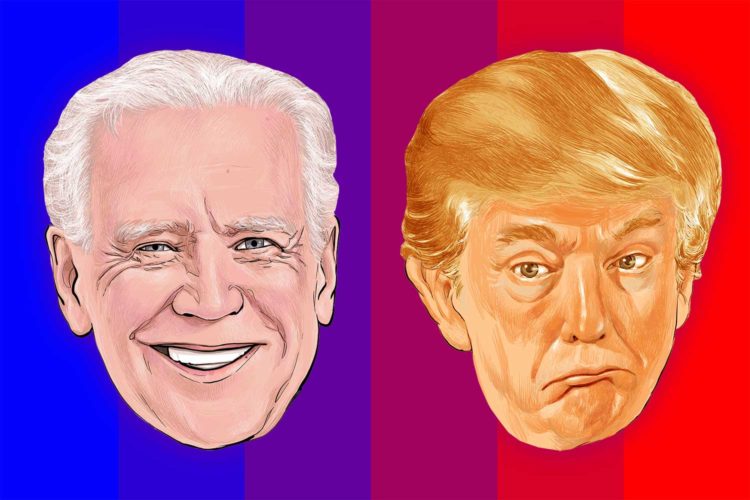 Election Day is only a few days away, yet somehow the Ken Bones of the world are still undecided when it comes to their choice for president. You’d think after four years of one guy, people would be able to say whether they want him back or not. But some folks need an extra push, and so today I’m here to help you decide who to vote for.

For the GOP, there’s the incumbent Donald Trump, a former TV host with a laundry list of, ahem, accomplishments during his nearly four years in office. On the Democratic side is former vice president Joe Biden, a lifelong public servant who loves ice cream and hates malarkey.

Since this country prides itself on free and fair (lmao) elections, it’s only right to offer an equal space to each candidate and see where they stand on the important issues.

Wisconsin is at the epicenter of an autumn surge of the novel coronavirus, so this issue should be hugely important for us. Every time we step outside now, there’s a chance we catch a life-threatening illness! And while I could outline Biden’s plan to ramp up public health response, all I really need to say is Covid-19 wouldn’t even be an issue at all without President Trump’s herculean incompetence. (“It’s going to disappear. One day, it’s like a miracle, it will disappear.”) All this winning is making my lungs hurt.

With right-wing zealot Amy Coney Barrett’s recent confirmation to the nation’s highest court, the judicial branch is weighing on a lot of people’s minds right now. The Supreme Court is going to be conservative for a while now, but Biden is open to changes. While he doesn’t currently support term limits for justices, he is open to the idea of expanding the court. Biden has also vowed to protect abortion rights from inevitable challenges.

Trump, meanwhile, has already given us Barrett as well as Brett Kavanaugh (who is the real-life version of every Brat Pack movie bully) and Neil Gorsuch, who is somehow the least bad of the three despite still being pretty fucking bad. Please get me off this ride before Jeanine Pirro is sworn in.

Despite serving two terms with the nation’s first black president and running alongside a woman of mixed cultural heritage, Joe Biden’s record on race is somewhat spotty. The 1994 crime bill is going to continue to haunt him. But he has shown an openness to change — he now calls that legislation a mistake, and his latest ideas involve finding alternatives to mass incarceration.

Donald Trump is a racist. Moving on.

Again, Donald Trump is a racist. Biden’s policy could literally just be using a comically large slingshot to hurl people over the border from Mexico and it would be better than what Trump and that cantaloupe fucker Stephen Miller have given us. Thankfully, Biden instead has a refreshingly humane plan for overhauling American immigration policy. I’m a little surprised, since Barack Obama’s record on the subject was questionable.

Biden is a supporter of mail-in voting, which has been a godsend for many of us during the pandemic. (He also stands with the U.S. Postal Service as the current administration tries to kneecap it.) The sitting president, meanwhile, spews out conspiracies about voter fraud while sitting on his lil hands when it comes to foreign governments attempting to influence the election. Not to mention his chilling thoughts on peaceful transfers of power. In fact, the best way I could illustrate Trump’s policy on election security is with this helpful graphic: 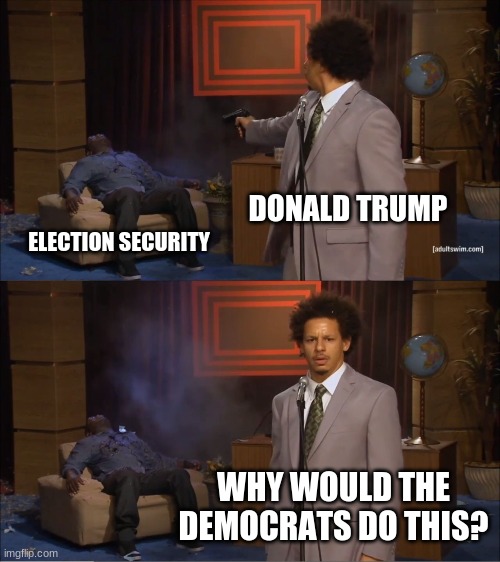 Though he’s not a Green New Deal guy, Biden has a surprisingly ambitious plan to combat climate change, to the tune of $3 trillion. Trump only recently sorta kinda but not really decided humans are playing a part in it, which is somewhere just below the bare minimum amount of a fuck to give.

TBH, both of them have some work to do when it comes to health care. We can’t continue being one of the only major industrialized nations without nationalized health care. In the meantime, Biden supports expanding the Affordable Care Act via further Medicare coverage. The Trump administration has sought to sabotage the ACA and wants the Supreme Court to strike it down. Very cool to make 20 million suddenly uninsured during a pandemic, right? His party has talked about “repeal and replace” for a decade yet still has no plan for the “replace” part. ¯\_(ツ)_/¯

Throughout his presidency, Donald Trump has stayed simping for the rich, passing massive tax cuts that benefit only those with Scrooge McDuck-sized pools of gold coins. Refreshingly, Biden is turning to the middle class, promising no raised taxes for anyone making under $400K and… sigh… you know what? Not to get all Ferris Bueller on you, but you’re still here? How can you still be undecided?

The last four years have been the worst of my life, and I am a cisgendered white male. Imagine how fucking bad it is for someone who is actually disenfranchised. And even beyond the social implications, every day we step outside now there’s a chance we catch a life-threatening illness. I can’t think of anything more selfish, mean-spirited and outright dumb than a vote to re-elect Donald Trump.