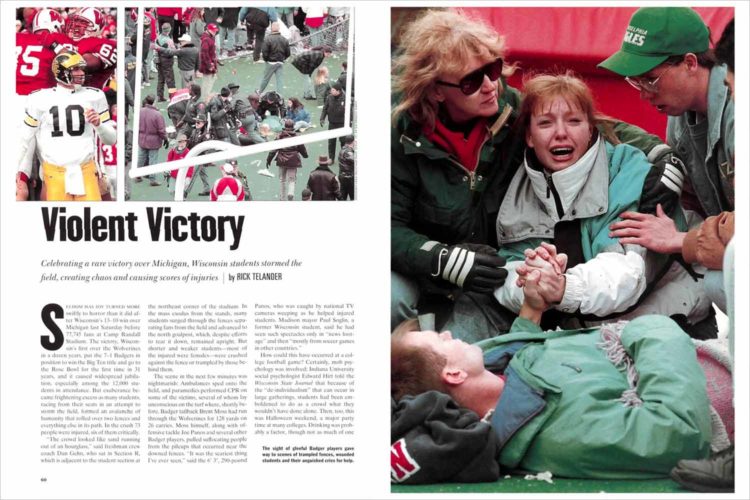 This week marks the 25th anniversary of one of the darkest moments in the history of the University of Wisconsin football program.

On Oct. 30, 1993, after a 13-10 victory over the Michigan Wolverines — the first against them since 1981 — the UW student section attempted to storm the field. What resulted was a bottlenecked stampede that injured dozens of people and left many more permanently shaken.

To borrow a phrase from Deadspin: Before 1993, the Badgers were toilet soup. They hadn’t had a winning season since 1984, and hadn’t been to a Rose Bowl since 1963. But heading into the game against Michigan, Wisconsin had a 6-1 record under its fourth-year head coach, Barry Alvarez.

The Badgers had just lost Paul Bunyan’s Axe at Minnesota the previous week, so beating the Wolverines was a huge morale booster. And better yet, it gave the Badgers a real shot to take the Big Ten title. Understandably, the student section lost their shit entirely when the final whistle blew.

It’s pretty common knowledge that Wisconsin’s student section is exceptionally rowdy. After all, we — myself included; my alma mater, DePaul, doesn’t have a football team — are one of the top party schools in the nation.

A Wisconsin State Journal report, published the day after the game, highlighted Badger fans’ unruly tendencies. “There is a 20-year history of rowdy, boorish, even illegal behavior at Camp Randall,” wrote George Hesselberg, describing a chaotic atmosphere that sounds more like Woodstock ’99 than the NCAA. Drinking, crowd-surfing and throwing things had become so prevalent that Camp Randall began frisking students and installed video surveillance. And that’s when the team sucked. Imagine how hyped the students would get when the team actually won games?

In short, it was a perfect storm that made landfall when the Badgers took down Michigan.

Students attempted to rush the field to celebrate the win, but they were blocked by a chain-link fence that separated the playing surface from the bleachers. However, fans from the upper rows continued to move forward, and the force of gravity caused them to slam into the fans in front, pinning them to the gate.

Some people were unconscious. Some weren’t even breathing. One student, junior Brenda Dickenson, recalled being pushed before everything went haywire.

“I remember falling down and hearing people screaming and yelling… I just sank down to the ground and was trapped,” she told the State Journal. “I didn’t know what to think. I just hoped somebody would find me.”

Public address announcer Jack Rane described the scene as “kind of like a wave.”

In total, about 70 people were injured. Members of the football team even helped out with the rescue, including star offensive lineman Joe Panos, who would go on to play in the NFL for the Philadelphia Eagles and Buffalo Bills. He called it “the scariest thing (he’d) ever seen.”

Ultimately, courts found both the University and Per Mar (Camp Randall’s security contractor) liable for the stampede. Partly to blame was Camp Randall’s archaic design. Built in 1917 and added onto in subsequent years, the student section in 1993 was unbroken rows of general admission with no aisle. This lack of organization did not help when hundreds of students attempted to descend on the field at once; 70 rows of people soon became 40.

Camp Randall Stadium has seen numerous renovations in the years since, including the addition of an aisle in the student section. Additionally, the field-level fence that created the bottleneck was removed. But would these change make a difference the next time a huge mass of people swarmed the field?

The post-crush redesign was put to the test in 2010, when the Badgers upset the top team in the country at the time, the Ohio State Buckeyes. Students again charged the field, and while it was not without incident, it didn’t come with the chaos of the 1993 incident. Only one person suffered a minor injury. More than 100 people were ejected from the game, however, mostly for drinking violations. Some things never change…