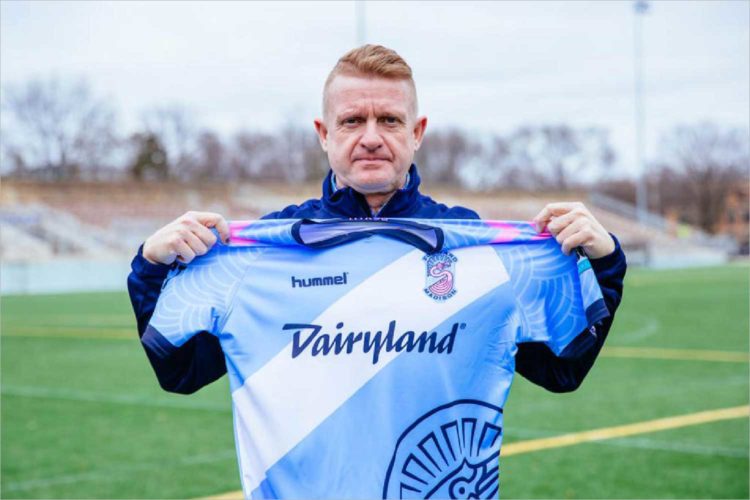 Carl Craig should feel right at home in Madison.

The 55-year-old Englishman was introduced as the new head coach of Forward Madison FC this week. Aside from the obvious reasons to be excited — we have an actual British guy leading our team! — the Newcastle native has a countercultural spirit that should resonate with Mingos fans. In short: he’s a bit of a weirdo.

Craig’s journey to pro soccer is a strange one. He played the game as a boy, but fell away in his teens. And his time apart from the beautiful game is fascinating. Craig is a former bike messenger and ex-vegan who tattooed himself at 11. He spent his adolescence protesting against Margaret Thatcher and playing in a slew of punk rock bands (running in the same circles as future “Tubthumping” stars Chumbawamba). In fact, Craig had never even coached organized soccer before leading a group of coworkers from a co-op music club.

Clearly, it’s not your typical sports story. But this is not to say Craig doesn’t have an athletic pedigree.

He spent his childhood playing for Sunderland and Newcastle United’s youth sides before moving to the U.S. in 1994. He’s been in Minnesota for much of that time, ingraining himself to the local soccer scene. (To some in the Twin Cities, he’s still “Saint Craig.”) He even helmed former Forward sister club Minnesota United before they moved up to Major League Soccer. And it’s because of him Loons supporters sing “Wonderwall” when the team scores.

Craig has long been drawn to Madison’s community-driven culture; he’s actually eyed the job since the USL League One team first launched. Now after two middling seasons, Craig has the wheel. He’s hoping this time it sticks, and that the city buys into his punk ethos on the game.

“In the big league, if you will, the rules are so much more stringent and it’s so much more conformist,” Craig told the Wisconsin State Journal. “Whereas this can be someone anarchic and free-flowing. Let’s find where we need to go. Obviously there’s rules in the league and et cetera. But I think you have a much better chance at this level of football being who you want to be as a football club. And that appeals to me.”

When it comes to Carl Craig, just listen to Lenny: he’s great!