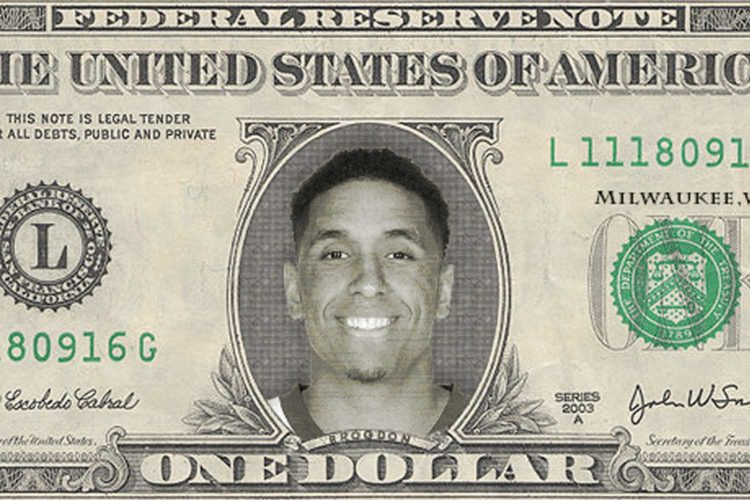 The stage is set for tonight’s NBA draft lottery, where 14 teams will be hoping — perhaps praying — that the ping pong balls bounce their way. If the basketball gods are agreeable, they’ll be put in position to grab a franchise-transforming player when they’re on the clock atop the June 22 draft.

But most NBA teams just hoping for someone who can make a difference right away by filling a void on the court or bolster a team’s bench. Someone like 2016 Milwaukee Bucks second-round pick Malcolm Brogdon.

Brogdon emerged from the shadows of last year’s draft and steadily became one of the best players in his rookie class. The 6-foot-5 guard started his first game Dec. 30 and started 27 more by regular-season’s end. He averaged 10.2 points per game, 4.2 assists and shot 40.4 percent from the perimeter in 75 games played.

With his first season now in the rearview mirror, Brogdon finds himself with as good a case as any to claim this year’s Rookie of the Year hardware. Except for one small little detail: Brogdon and the Bucks haven’t really made much of a case. Brogdon turned down the Bucks’ offer to pay for a Rookie of the Year campaign, electing instead to let his stats speak for themselves.

With that in mind, we thought we’d help him out and make his Rookie of the Year case for him.

Which rookie had the best statistics?

To be frank, Brogdon’s stats aren’t eye-popping. This may seem like a poor way to start out an argument for the Rookie of the Year, but stay with me for a moment.

The award is given out every year regardless of whether or not a rookie player took the NBA by storm. Not every season can see a 19-year-old, prep-to-pro phenom like LeBron James finish with 20.9 points per game, 5.9 assists and 5.5 rebounds. So with that being said, Brogdon really only needs to be better than the competition — and this year that isn’t so hard.

Brogdon’s two main competitors are two Philadelphia 76ers: Dario Saric and Joel Embiid. Both were lottery picks, and both carry the heavy burden of having to lift the their team from the ashes and back into relevance.

Despite what 76ers head coach Brett Brown thinks, neither of his players should win.

Embiid can be eliminated from the Rookie of the Year conversation almost immediately. He played in just 31 games — less than a half-season — due to a knee injury suffered in January. Despite the best numbers of any of the rookies, including 20.2 points per game, Embiid quite simply didn’t play enough to win an award that is supposed to reflect a player’s entire rookie season.

Meanwhile, Saric outscored Brogdon by 2 points per game (12.8) and topped him in rebounds while trailing in both assists per game and three-point percentage. After the All-Star break, though, Saric turned it into high gear, averaging 17.3 points and 7.3 rebounds during the final stretch.

It might also be worth mentioning that Brogdon didn’t need to play the same scoring role as Saric. After all, he is teammates with Giannis Antetokounmpo. But the stats are what they are.

Who had a bigger impact on his team’s performance in games?

With stats being largely a wash between the two players, the debate turns to who was the bigger difference-maker on the basketball court.

Despite appearing in fewer games, Brogdon made the most of his opportunities on the court, by doing things like this…

When he missed five games with a back injury in early April, the Bucks went 2-3 in his absence, losing three in a row.

In the first game of the playoffs in Toronto, Brogdon finished with 16 points on 4-of-7 three-point shooting to help the Bucks steal a road game over the No. 3-seeded Raptors.

Saric, meanwhile, played for the 28-54 76ers. That was a gain of 18 more wins than a season ago, despite losing Embiid halfway through the year.

According to basketball-reference.com, Brogdon’s win share — or the number of wins he generated for his team — was 4.1 this season, compared to just 1.0 for Saric.

Both players have to be credited as catalysts to their teams’ improvement this season, but Brogdon had a chance to shine in bigger games and did just that.

Who brought more intangibles to the table?

In a Rookie of the Year race where the usual criteria is too close to call, it will ultimately come down to the intangibles between the two.

That just happens to be where Brogdon has his biggest advantage.

For a player who had little expected of him out of the second round, Brogdon has far surpassed expectations. Saric more-or-less performed as one would hope from a lottery pick on a bad team.

The unheralded Brogdon proved himself to be exactly what the Bucks needed after a dip in success last season.

In this new NBA, where perimeter shooting and spacing are key, Brogdon provided the Bucks something they were sorely lacking — a shooter and capable ball handler.

He finished the season as one of four rookies ever to average more than 40 percent shooting from three-point range (along with Larry Bird, Stephen Curry and Deron Williams). He also was the only rookie to record a triple-double this season when he recorded 15 points, 12 assists and 11 rebounds on Dec. 31.

On the defensive end of the court, Brogdon was often tasked with guarding an opponent’s top offensive weapon (he was a two-time ACC Defensive Player of the Year, after all) and he has held some of the best players in check already in his young career.

If that was not evidence enough of his importance to the team, teammate Giannis Antetokounmpo has said he thinks Brogdon could be president one day.

I don’t know if he’ll ever make it on that ballot, but in the meantime he’ll have to settle for the Rookie of the Year ballot instead. If his presidential campaign is anything like his Rookie of the Year one, though, he’s already got my vote.

The NBA Rookie of the Year will be announced June 26 as part of the inaugural NBA Awards ceremony in New York City.