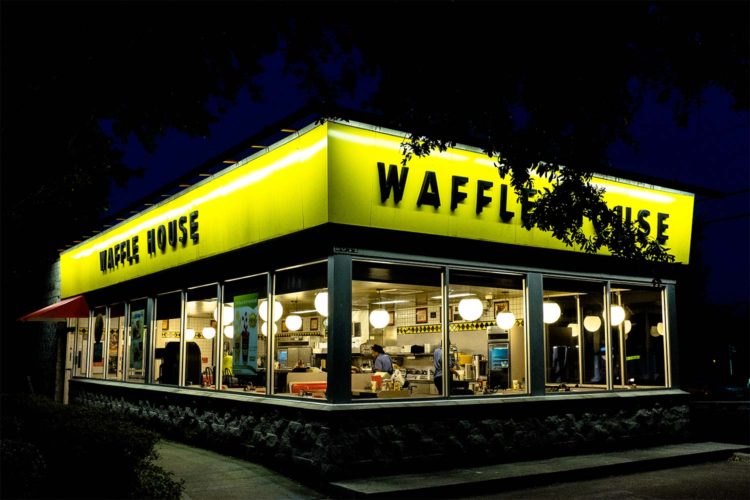 While we always prefer to patronize local restaurants, there’s likely not a single person in Madison who doesn’t occasionally visit a fast food spot or other chain. We spend enough money at chains, for example, that we somehow support 10 Arby’s locations. But which chains is Madison missing out on? You hear plenty of folks wax poetic about regional chains we don’t have, or come across chain cultural references in media that we can’t relate to.

I, for one, am one of those people who enjoys visiting regional chains when I’m in another part of the country. For instance, my first experience with Five Guys happened on a business trip in Baltimore before we had them here in Wisconsin. So, based on my travels and just my food obsessed media intake in general, here are the restaurant chains that need to come to Madison.

It’s open 24/7, it’s full of sassy servers, it’s pretension-free and it’s cheap as dirt (tastes much better than dirt, though, trust me). The Waffle House has always been described as a shining beacon of fluorescent lights that welcomes anyone, and anyone can find a reason to go there. College student who needs a hangover helper at 1 p.m. but Mickie’s is packed? Waffle House. Family needs a quick, inexpensive meal before soccer practice? Waffle House. Bus load of old ladies needs a place to eat after church? Waffle House. Long live the pecan waffle.

Likelihood of coming to Madison: 5/10. This is mostly a Southern chain, but there are quite a few in Indiana and Ohio.

So Kopp’s isn’t quite a chain, I don’t think, but with three locations in the Milwaukee area it’s close enough. Why hasn’t frozen custard taken hold as strongly in Madison as in MKE? We certainly love our frozen dairy treats, and frozen custard straight out of an old iron lung-type churner is a thing of beauty. We need custard culture here, too, and Kopp’s is the restaurant that should bring it. Oh, and the burgers are pretty damn good as well.

Likelihood of coming to Madison: 6/10. The Kopp family planned to open a new restaurant in MKE before the building was unfortunately condemned a couple years ago, so they’re open to new projects.

I’ll be honest, this one I want here just so I can finally have an informed opinion on the In-N-Out vs. Five Guys vs. Shake Shack debate. I hear about this place so much that I already know how to order something “animal style” (and what that means), that you need to order the fries well done or they’re terrible, and that it’s a magical place full of unicorns who cook rainbow-kissed burgers. Somehow it just sounds and looks like another fast food joint to me, but I’d love to taste it for myself.

Likelihood of coming to Madison: 1/10. The closest is in Texas. Guess I’ll have to make a point of going to one on my next Vegas trip.

Jollibee is like an Asian version of McDonald’s, headquartered in the Philippines. It’s got a happy little nondescript insect mascot that definitely feels foreign and comfortingly familiar at the same time. The menu is mostly fried chicken and burgers, but they’re also known for their spaghetti with a sweet sauce, ham, sausage and ground beef. Dig deeper into the menu and you’ll also find “fiesta noodles” with garlic sauce, pork, shrimp and hardboiled egg. There’s also a Hawaiian influence with Spam sandwiches and burger steaks served with brown gravy and rice. Who doesn’t want all of this stuff to become commonplace in Madison?

Likelihood of coming to Madison: 1/10. There’s two in the Chicago area, but they only seem to go where there’s enough of a Filipino or Hawaiian population to support them.

And speaking of that burger war, here’s another contender. Shake Shack started in New York City as a burger and frozen custard shack… See how well this one would fit into Madison and Wisconsin in general? People waited in huge lines to get their burgs when there was only one location, so they’ve expanded. Now they’re a certified chain restaurant, and while the quality is probably not quite the same as it was a decade ago in NYC, it’s still pretty highly regarded in the pantheon of fast food.

Likelihood of coming to Madison: 9/10. There’s a Milwaukee location opening by the end of this year, and State Street or the Square seems like a great fit for the urban locations they prefer.

Everyone likes chicken fingers. Just embrace it. That’s what the founder of Raising Cane’s did, and he tapped into the universal truth that everyone needs a chicken finger sometimes. All they make is chicken fingers and sides. The menu is made up of a few value meals with varying amounts of fingers, plus fries, slaw and some griddled garlic Texas toast. Since fingers is all they do, they batter and fry them fresh all day long. The simplicity is everything.

Southern food is the latest trend up here in the great white North. A chain located primarily in the Southeast, Bojangles’ is all about fried chicken and buttermilk biscuits. Side items have a Southern and Cajun thing going on too, with options like dirty rice, Cajun pinto beans and mac and cheese. You can get all kinds of delicious things inside of a biscuit sandwich, like Cajun seasoned fried chicken, chicken fried steak, country ham and smoked sausage. If Bojangles’ ever made it up here, Southern food wouldn’t just be a trend, it’d stick around for a while. Wisconsinites love this stuff.

Likelihood of coming to Madison: 2/10. The nearest locations are in Kentucky.

There’s really only two reasons to go to O’Hare airport: flying to someplace tropical, or eating at Torta Frontera. There are three locations of Rick Bayless’ Mexican torta shop in O’Hare, along with one other non-airport spot in Philadelphia. Unlike all other airport food, however, these sandwiches are actually good, stuffed with mostly Illinois- and Wisconsin-sourced ingredients. So, how about a location in the Dane County Airport? Imagine the looks on your seatmates’ faces when you open up a cochinita pibil torta and a container of bacon-topped guacamole?

Likelihood of coming to Madison: 2/10. With only four locations and three of them in an international airport, the odds look mighty slim.