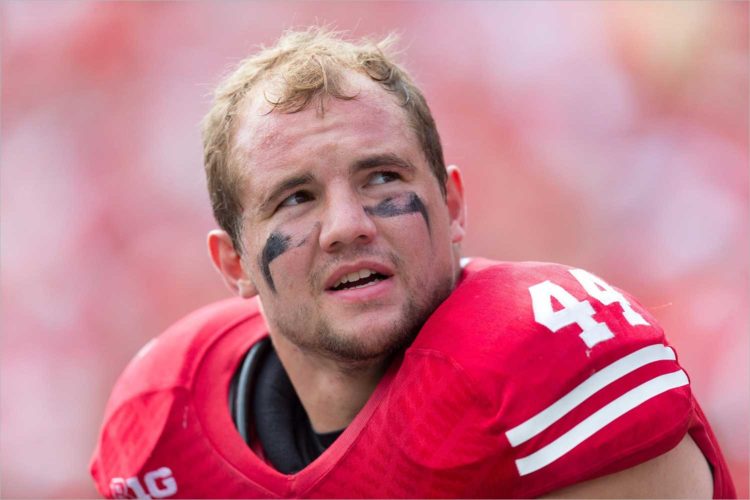 On the football field, Chris Borland was known for delivering bone-crushing hits.

Wisconsin Badgers fans will remember Borland as an intense player, a mixture of speed and physicality. The linebacker — a 2013 second-team All-American and 2014 third-round draft pick of the San Francisco 49ers — was beloved during his time in Madison. But then in the spring of 2015, after an all-rookie season, Borland abruptly retired from the NFL at age 24, citing concerns over lasting brain damage from chronic traumatic encephalopathy (CTE).

“I just honestly want to do what’s best for my health,” Borland told ESPN’s Outside the Lines that year. “From what I’ve researched and what I’ve experienced, I don’t think it’s worth the risk.”

It’s hard to argue with that logic, unless you’re one of the macho old-schoolers who talks about football in war metaphors. To them, Borland might always be a pariah. But it’s nonetheless clear that he has an important point to make about what could be an existential problem for the sport.

And now in a new Netflix documentary, Borland has added to his own story and put his alma mater on the hot seat, taking the UW football program to task for its seeming lack of concern over player welfare.

If you follow sports — American football especially — you’ve undoubtedly heard about CTE. In layman’s terms, it’s “the concussion disease,” a degenerative condition that there’s currently no way to diagnose in the living. After spending their careers taking and suppressing multiple head injuries, some ex-players show signs of mood swings, loss of motor function and early-onset dementia. In a macabre twist, it was actually another UW player — Pro Hall of Fame center Mike Webster (pictured above) — who was the first to be officially diagnosed after his 2002 death.

In 2011, former Chicago Bears safety Dave Duerson died of a self-inflicted gunshot wound to the chest — that way, the 50-year-old’s brain could be donated to science. For many, the face of CTE is Junior Seau, the iconic and charismatic Hall of Fame linebacker who took his own life in 2012. Considering the ex-Charger, Dolphin and Patriot’s gregarious and outgoing public personality, his death was surprising and shocking.

The conversation took an even darker (yeah, it gets worse) turn in 2013, when 23-year-old New England Patriots tight end Aaron Hernandez was arrested for murdering acquaintance Odin Lloyd. He was convicted in 2015, acquitted of a double-murder in 2017, and then days later died by suicide in prison at age 27. After his death, Hernandez was diagnosed with the most severe case of CTE ever found in someone his age — and experts believe the repeated head trauma played a factor in the crime.

Last week, Netflix released Killer Inside: The Mind of Aaron Hernandez, a three-episode docuseries. At its core it’s about his crime and subsequent legal battles, but Killer Inside also explores the serious neurological trauma he experienced. And it used his story as a springboard to explore the rot in football.

Early retiree Chris Borland was a natural choice to talk about the head injury issue. But Killer Inside should come with a trigger warning for Badgers fans, because Borland was unsparing about the physicality of his time in Madison. You’re wrong if you thought Bucky would be an exception to the rule.

In the doc, Borland talks about running high intensity, full-contact practices for relatively inconsequential games. He’d play both special teams and scout teams, as well as defensive drills. (“Too much of a load for anybody,” he says.) Upperclassmen would line up to get shots of the painkiller Toradol before games. And according to Borland, he’d regularly experience imbalance and pervasive ringing in his ears.

“It’s a big industry,” the 29-year-old says in Killer Inside. “And they’re willing to put in basically kids, young men, in situations that will compromise their long-term health just to beat Northwestern.”

Wisconsin officials deflected criticism, citing their commitment to providing a safe environment for their players. But if what Borland is saying is true — and he’s certainly done his homework on the topic — it would hardly make UW an outlier. The problem is pervasive throughout the sport. While awareness of the issue continues to grow, change comes slowly. And unfortunately, that’s partially by design.

As Borland puts it: “They’re not in the health business. They’re in the violence business.”