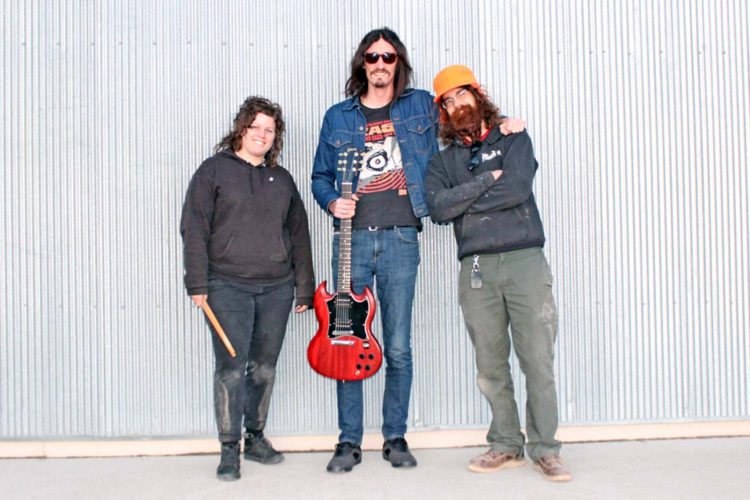 Clean Room is a band that tends to stay in motion, both on two feet and four wheels.

The Madison punk trio — who will celebrate the release of a 7-inch split with fellow locals Lurk Hards at Mickey’s Tavern on Saturday night — has experimented with psychedelia in the past, but vocalist and guitarist Jeffrey Halleran says the band is embracing its skateboarding roots.

“With the present-day lineup of Clean Room, songs about skating, like ‘Thrash the Night Away,’ which never really got performed live in earlier times, get to take on a new energy based on the fact that we all skate.”

Halleran is the sole consistent member of Clean Room, which has had a revolving door of players over the years before settling in with drummer Elyse Clouthier and bassist Matt “Donut” Behm in 2016. Both are heavily involved in Madison’s skateboarding community through a collective called Forward Living.

“(We) empower ourselves and community through skating,” says Clouthier. “We build things and skate them.”

“We inspire and grow our scene, while breaking down the barriers society puts on us. Like a plant cracking the concrete,” adds Behm, whose hairy visage can often be seen constructing ramps on Clean Room’s Instagram.

Clouthier describes it as a DIY effort, an ethos that reverberates throughout Clean Room’s career — in other words, it makes them the perfect foils to Halleran. The band embarked on a tour of the West Coast last fall, playing an array of clubs and skate shops booked mostly by the frontman, with stops everywhere from Salt Lake City to San Diego.

That was in support of Mad City Meltdown, an EP released last year (they also put out Bad Bad Dream, the first official release to feature Behm and Clouthier, in 2017; this band really doesn’t stop working). And while Halleran’s early psych influences can be heard, it also serves as a jumping off point for the breakneck skate punk the band actualized on their most recent release, this year’s Down to the Axle EP.

“We each started to come up with our own parts and became more familiar with each other’s styles of playing, leading us into what we are really about: skating,” Behm says.

The band — who on June 25 will also play one of the final shows at The Frequency — records every song they try, Behm says, like skateboarders breaking down their tricks on video. And though the band members are all lifelong skaters who play skate-friendly music, they try not let that label define them.

When asked if he considers himself a musician who skates or vice versa, Behm says: “I don’t like the name skater, because it has too many negative connotations or expectations of what that’s supposed to mean,” though he does add self-effacingly, “but I’m definitely not a musician, at least not on bass. I can’t read bass clef.”

For Halleran, the dichotomy is much clearer.

“I put most of my energy into doing Clean Room, which is 50% cyber-communication and drawing flyers, 50% actual playing guitar,” he says. “Sometimes actual skating happens — less than I’d like for me, especially in Wisconsin wintertime.”

But Halleran does admit that as summer approaches, he’s been breaking in a new board at Clouthier’s Femme Skate Nights (held Wednesdays at the Madison Skate Park on Ingersoll Street).

“I’m just a dude who plays guitar and rides a skateboard when I get the chance.”