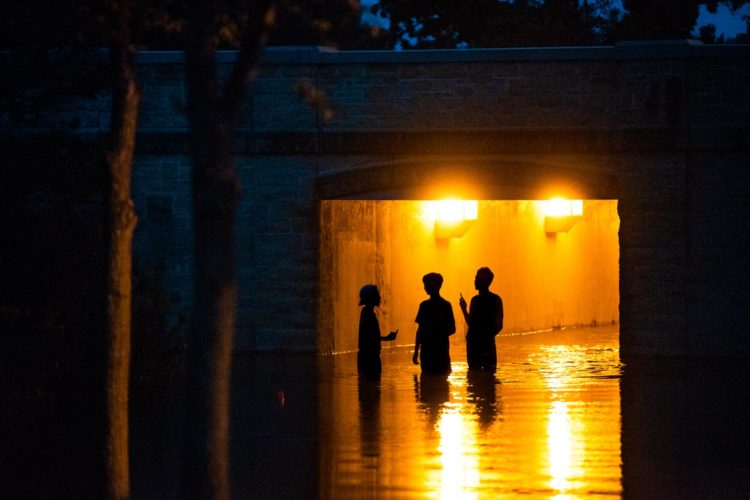 Last week, the Arctic’s strongest and thickest sheet of ice cracked for the first time, marking a moment of panic for scientists who viewed the glacier as a “last bastion” against a warming planet. But if you’re looking for the effects of climate change, look no further than the unprecedented flood water pouring into Dane County.

Following a torrent of heavy rains that produced 11 inches of water, Madison and its surrounding areas have fallen victim to flooding that, per the Milwaukee Journal Sentinel, has done more than $100 million worth of damage to property and resulted in at least one death. And with additional rain in the forecast this week, the county is preparing for more disruption to daily life.

In Madison, city officials warned that as many as 1,700 households could be damaged by flooding and some residents would be forced to evacuate. A few roads downtown were made unusable by standing water amid fear that East Washington and some of Madison’s other busiest streets could be closed down entirely.

As the UW-Madison Center for Limnology points out, incidents of heavy precipitation have becoming increasingly common events in the U.S. This is especially true in the Midwest, where there’s been a 37% increase in such incidents over the course of the 2000s, per the 2014 National Climate Assessment. This has produced more floods around the country, according to WisContext, including more than 80 such events in Dane County in the last 150 years.

Madison’s isthmus appears likely to be adversely affected by the increasingly common extreme weather events. This doesn’t come as much of a surprise for those paid to keep a close eye on such things.

Last year, researchers at UW-Madison ran computer simulations to project what would happen in the case of extreme rain incidents. In particular, they focused on heavy precipitation hitting the upper Yahara Watershed, which drains into Lake Mendota and Lake Monona. The results, highlighted by WisContext, are troubling for those who spend a lot of time downtown.

A lock between Lake Mendota and the Yahara River would allow city officials some control over the effects of the downfall. However, the lack of such tools in the slow-draining Lake Monona would make it difficult to prevent that body of water from being overwhelmed. In a simulation that dumps between 12-15 inches of water on the region, much of central Madison would find itself underwater, including streets just a few blocks from the Capitol.

Whether the simulation becomes a reality will depend entirely on where the rain falls and just how much of it is dumped into the very delicately balanced bodies of water surrounding the capital city. Monona already reached 100-year flood levels, per the Wisconsin State Journal, and with more rain still expected to be on the way, the preparedness of the city will be tested.

The problem for Madison is even if the city makes it out of the next round of rain unscathed, these types of teeth-clenching situations are likely to become more common. Climate change isn’t going away and instead of bracing for it, lawmakers have effectively sought to ignore and undermine it. Earlier this year, Republican lawmakers pushed through legislation that weakened protections of wetlands to allow new developments on the landscapes. Wetlands soak up water in a way pavement can’t and help prevent against flooding.

As you drive through downtown, take note of the standing water in the streets, the notices on doors advising people to evacuate, the sandbags piled up against storefronts. In Madison, that is what climate change looks like.