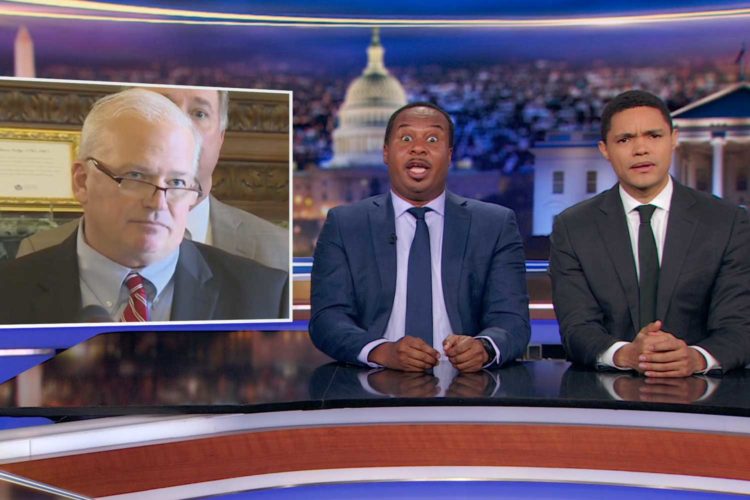 There’s nothing funny about the legislative power grab going on Wisconsin right now. Thankfully, no one told the writers of The Daily Show with Trevor Noah.

On Tuesday night, the Comedy Central program ran a short segment on the Republicans’ extraordinary efforts to strip power away from Democratic Gov.-elect Tony Evers. Similar ratfuckery in Michigan and North Carolina was also highlighted, but much of the focus was on our fair state.

Noah lost his voice over the weekend and was resigned to pantomiming alongside correspondent Roy Wood Jr., who tried to make sense of it all through a series of analogies. In one instance, Wood compared what the state GOP is doing to Evers to Marvel taking away Spider-Man’s powers now that he’s black.

Wood also hilariously torched Evers for using the phrase “hot mess” in a national news interview, because as we all know nobody says “hot mess” anymore. Come on, Tony. Couldn’t you have asked Lt. Gov.-elect Mandela Barnes what all the cool kids are saying these days?

The whole clip is only about five minutes long and definitely worth a watch. Personally, I’d prefer everything be explained to me by Roy Wood Jr., who visited Madison in October. He’s a natural at taking bad news and somehow making it palatable. Take, for example, his summation of when Senate Majority Leader Scott Fitzgerald said the quiet part out loud and decried Evers’ “liberal agenda.”

Wood, being Wood, translated this into what Fitzgerald really meant: “The people of Wisconsin want this liberal stuff and I don’t, so fuck ’em.”