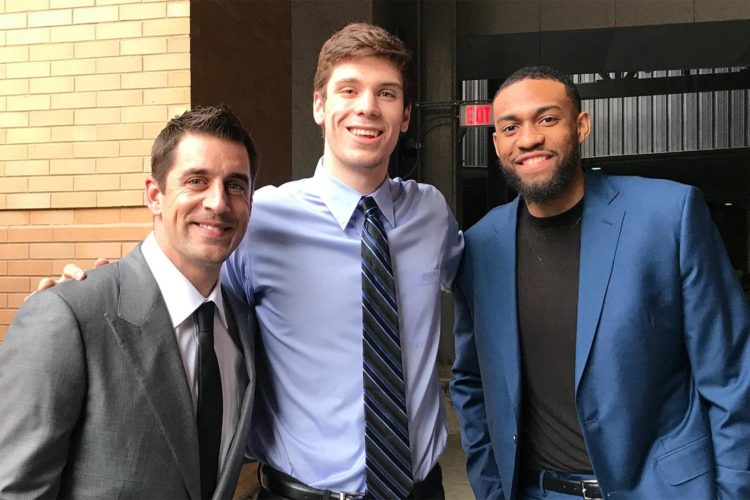 Some of Wisconsin’s most recognizable athletes congregated at the UW Field House last night for the 6th Annual Wisconsin Sports Awards show. (Am I the only one who didn’t know this event existed?)

Plenty of awards were handed out over the course of the two-hour show, including Team of the Year, Athlete of the Year and Coach of the Year. But more importantly, there were plenty of hilarious moments.

Below is a timeline of the happenings of the evening.

6:32 p.m.: Wisconsin basketball player Ethan Happ was excited to break out his new “special pants” for the big occasion.

.@EthanHapp22 breaking out the special pants for #WSA #Badgers pic.twitter.com/JLSKgW0IdG

8:11 p.m.: Wisconsin basketball player Zak Showalter was given a chance to wax nostalgic about what is probably the highlight of his life so far. He took it and ran with it.

8:27 p.m.: It wouldn’t be an important event in Madison without The MadHatters, right?

8:38 p.m.: Showalter tried to replicate his miraculous shot against Florida, but has it rejected by Packers left tackle David Bakhtiari.

A better video of @ZShowbball333 shooting at a @DBak69 hoop is coming soon from @AaronRodgers12… #WSA pic.twitter.com/vnac9mDpoU

8:42 p.m.: Bakhtiari held onto the spotlight by stealing Aaron Rodgers’ thunder as the quarterback accepted an award. Kanye West could have probably even learned a thing or two…

8:57 p.m.: But Bakhtiari wasn’t done there. (Were they serving alcohol at this thing?) Toward the end of the show, he asked out Wisconsin volleyball player Lauren Carlini… to Red Lobster.