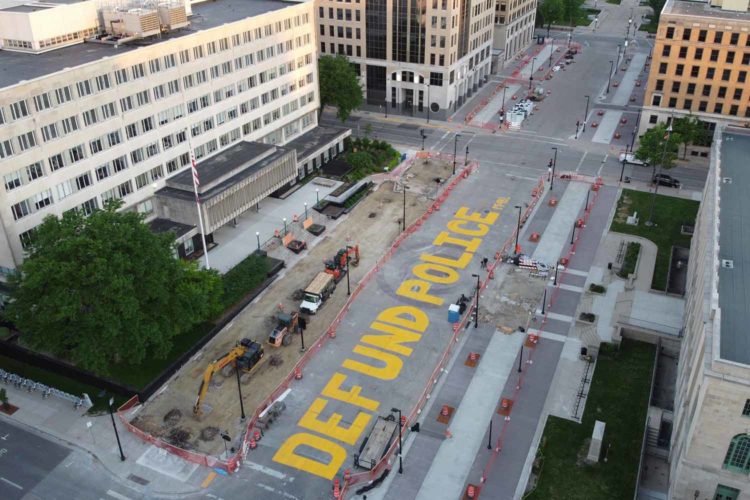 Want to know the goals of the protestors taking to the streets of Madison each day? Look no further than the ground under your feet on Martin Luther King Jr. Blvd.

“Defund the police” has become a rallying cry in the wake of George Floyd’s death at the hands of the Minneapolis Police Department, and it has unsurprisingly left a lot of people shook. To some it sounds radical, even scary. The notion invites wild west lawlessness in which cities devolve into chaos. But in reality, it may be the most effective fix to reign in the country’s renegade police culture.

For starters, defunding the police doesn’t mean getting rid of cops. Law enforcement isn’t going to disappear overnight; this won’t become The Purge. Rather, it’s a realignment of priorities in a way that benefits both communities and the departments intended to serve and protect them.

But there are a lot of misconceptions about the #defundthepolice movement floating around, so I’m going to try and clear some of them up.

What does “defund the police” mean?

Right now, police departments nationwide are given astronomical budgets, often at the expense of other essential social services. The Madison Police Department’s operating budget is over $80 million. Slashing MPD funding would allow for some of that money to be allocated to things like affordable housing and mental health resources.

The problem is not overpolicing, it is policing itself.https://t.co/CmxBi9n135 pic.twitter.com/2o4LeVNmLq

“Part of the problem is that for decades now, communities have been told that the only resource they can have to address their community problems is more policing and more incarceration,” says Alex S. Vitale, author of the 2017 book The End of Policing. (The e-version is currently free at Verso Books’ website.)

By defunding cops, those alternate solutions become far more affordable. Plus, it helps take the load off of overburdened police departments, who are sometimes the only available service in some areas.

“Many people in these communities know that they would be better served by a new youth center with mentoring services or anti-violence programs,” Vitale says, “but they’re told that they can never have those things.”

It’s infuriating that those solutions have always been doable, were it not for constant and effective pushback by police unions.

While a crucial step, defunding the police is only one part of a much larger conversation about police culture. In a recent essay published on Medium, one former cop described it as “a thick blue tumor strangling the life from our communities.” As difficult as this may be to hear, U.S. policing is an inherently racist system that descended from the runaway slave patrols of the 1800s. It exists for the notion of white safety at the disproportionate expense of black people.

And right now there is no greater time to make an argument for dismantling this structure. Across the country, we’ve seen cops respond to police brutality protests with more police brutality. Officers are showing up to demonstrations decked out in hand-me-down military hardware and violating the Geneva Convention against peaceful protestors for minor infractions. If this were literally any other job, these people would be fired immediately.

But thanks to bellicose police unions, officers rightfully accused of misconduct often skate by without so much as a slap on the wrist. Likewise, they’ll bully city governments into heaping Scrooge McDuck-sized piles of money onto them, often at the expense of other services. These fascistic tendencies were recently explored by comedian John Oliver on a mandatory episode of Last Week Tonight.

Allowing police culture to carry on as it has for so long would be a monumental civic failure. It’s past time to defund this broken institution. Especially considering it can work.

So, you’ve defunded the police… now what?

If you want to see radical philosophy in action, look no further than Camden, New Jersey. Once considered one of the most dangerous cities in the country, Camden dissolved its police force in 2013 and moved toward a more community-based model (aggregating officers from around the county) and adopted stringent use-of-force restrictions. The results have been eye-opening.

Since reforming, excessive force complaints have dropped by a staggering 95%. And while the influx of officers did lead to more cops on the streets, it also increased the number of non-crisis interactions with residents. Slowly, a base-level of trust was built between Camden and its new police force.

Chief Wysocki on the march today, standing together with the residents we serve to remember and honor George Floyd. #StrongerTogether #CamdenStrong pic.twitter.com/UJAjxXkxrx

“It took me some time to adjust to having [police] cars stationed on major thoroughfares,” says Nyeema Watson, the associate chancellor for civic engagement at Rutgers University’s Camden campus. “That still raises the hair on my neck sometimes, but I know their approach is an attempt to say ‘We’re here, we’re visible.’”

What works in Camden won’t work everywhere. And it isn’t so much an example of defunding as reorganizing. But it does show that sweeping police reform is possible. Cops won’t disappear overnight, but defunding them allows the country to have a long-overdue conversation about what exactly we want their role to be. Because in the immortal words of the internet, “this ain’t it, chief.”