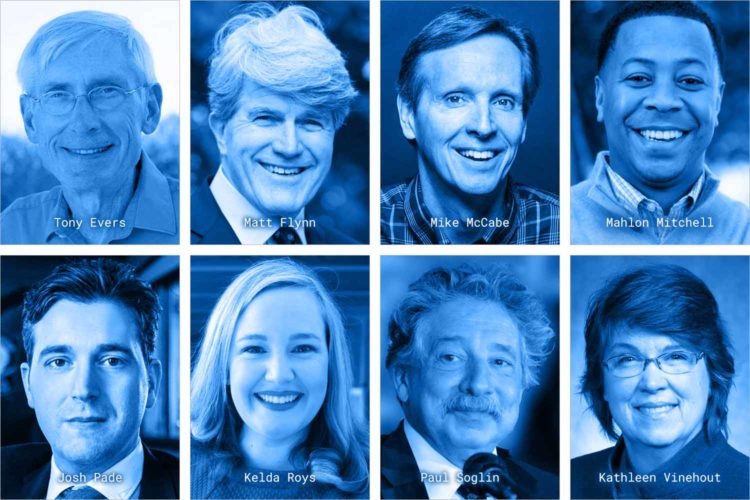 Seven of the eight Democratic candidates running for governor gathered Wednesday evening at the Madison Central Public Library to lay out their cases as to why they should be the person to challenge Scott Walker come November. The event — sponsored by Isthmus, WORT 89.9 FM and The Progressive magazine — was a veritable who’s who of Democrats, as in, “Wait, who are these people again?”

If you missed the event, fear not. The fine folks at WisconsinEye have helpfully documented the nearly two-hour forum so you can catch up on all the action, which included a Macbeth quote, some plugs for one candidate’s novels, and multiple segments of candidates just raising their hands in response to questions.

If that all sounds a little too much excitement for you to handle, though, here’s a quick recap of what you need to know from the event:

1. No one disagrees on anything.

While there were seven different voices on stage for the event (Mahlon Mitchell, president of the Professional Fire Fighters of Wisconsin, was absent), they all sounded pretty similar while discussing the issues. There were many more instances of “yes, and…” as candidates built atop one another’s ideas than any sort of major disagreements.

Even on the rare occasions that a candidate seemed to dissent from the rest of the crowd, the differences seemed small after drilling into the details. For example: Mike McCabe, co-founder of the watchdog group Wisconsin Democracy Campaign, didn’t raise his hand when the candidates were asked who would raise the state’s minimum wage to $15 per hour within their first term. Why? Well, his plan to get to $15 per hour would take five years, which technically wouldn’t be within a governor’s four-year term. The man is a stickler for details.

Partisan primaries are typically not the place where great debates take place, and it was clear Wednesday that the Democratic nominee will be working off the same, basic platform as most of their fellow party members.

2. Paul Soglin is the favorite on stage.

Superintendent of Public Instruction of Wisconsin Tony Evers is way ahead in public polls with just under a week until the primary vote, but Madison Mayor Paul Soglin won the vote among his fellow candidates — as long as you include his vote for himself.

Forum moderator Dylan Brogan of Isthmus asked the candidates who they would vote for if they weren’t on the ballot. Only two candidates received multiple votes: Evers and McCabe both cast theirs for state Sen. Kathleen Vinehout, while former Democratic Party of Wisconsin Chair Matt Flynn (no, not that Matt Flynn) and former state Rep. Kelda Roys tossed their support to Soglin. When asked who he would vote for if not on the ballot, Soglin said he’d write in himself, which technically gave him the win — though a write-in vote would be a terrible idea come election day if Democrats have any hope of actually ousting Walker.

3. There’s no love lost between Evers and Flynn.

Most of the candidates had no problem saying they would support the Democratic ticket no matter who was on the ballot — only McCabe wouldn’t guarantee his backing — but it became clear at the end of the forum that Matt Flynn and Tony Evers would probably not spend much time hanging out together.

Flynn, who was combative the whole night after being asked about his role in representing the Milwaukee Archdiocese in legal cases involving priests who sexually assaulted children, used his closing statement to take a not-so-veiled shot at Evers, whom Flynn suggested didn’t have the guts to take on Walker.

“If we nominate somebody — a good person — who praised [Walker’s] education budget, who said it was kid-friendly, who said it reflected his budget priorities, when I know it was a crooked budget … that’s not a contrast,” Flynn said, alluding to Evers’ cooperation with the Walker administration in forming a budget for education. “It gives the appearance of Republican Lite. We need a very aggressive, articulate candidate who is going to eviscerate [Walker] on the stage.”

Evers, who had already given his closing statement, asked for a rebuttal and called the comment a “cheap shot.” Flynn pretended as though he had no idea why Evers thought the comment was about him, even though he pointed directly at Evers while making the comment. Real subtle stuff.

4. Foxconn will get the boot.

There is more than one way to skin a cat and about seven ways to skin a fox. Each and every Democrat on stage issued their own version of outrage over Scott Walker’s deal to bring Taiwanese technology manufacturer Foxconn to the state, and promised to pursue ways to shut down the deal — or at least the billions of dollars of government handouts that will be provided to the company as it sets up shop in Mount Pleasant.

Flynn brought to the table the most creative solution for stopping Foxconn: a lawsuit that will claim the agreement is unconstitutional. Other candidates were less interested in novel solutions. After all, the executive branch comes with some blunt instruments — and there was no one on stage blunter than Paul Soglin. “You don’t have to sue them. You simply cut off the spigot. You stop the money,” he said. “That’s what I will do.”

5. The primary is Tuesday!

Listen to the candidates, read up on all of their opinions, and make sure you turn up this Tuesday, Aug. 14 to vote in the partisan primaries to determine which of the Democrats will have a shot at keeping Scott Walker from a third term as governor. The man is as unpopular as he’s ever been and ripe for a defeat. So find your local polling place, grab your ID and get to the polls between 7 a.m. and 8 p.m to cast your vote. If doing your civic duty isn’t reason enough, you’ll get one of the “I Voted” stickers and a sense of superiority.