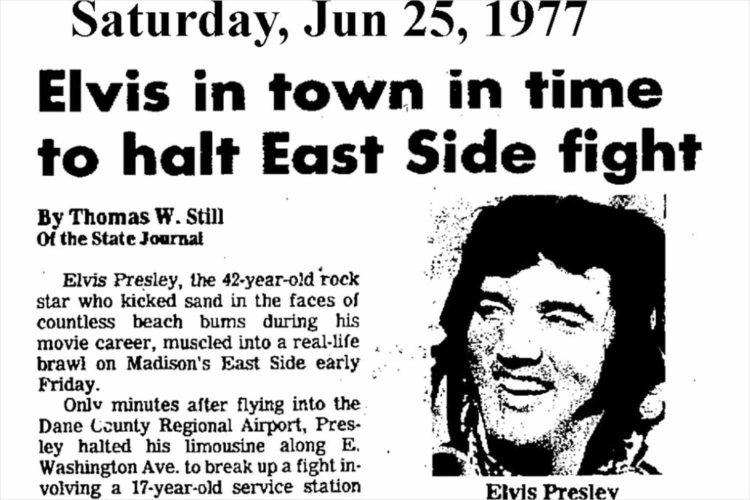 Given all the conspiracy theories and urban legends surrounding his death, for all we know Elvis Presley today could be hanging out on an uncharted island somewhere, playing poker with Tupac Shakur and Andy Kaufman. However, we do know exactly where the King was 40 years ago tonight: performing at the Dane County Coliseum, hours after breaking up a street fight in Madison.

In the early morning of June 24, 1977, Presley was on his way to the Sheraton Hotel when he noticed a scuffle going on between three young guys at the Skyland Service Station (which is now Schoepp Motors Northeast, on the corner of Stoughton Road and East Washington Avenue). Seeing this, Presley did exactly what you’d expect any A-list megastar to do: stop the car and get out.

So the story goes, the King’s limo was stuck at a traffic light when Keith Lowery, Jr. — the son of the shop’s owner — started throwing down with two other men, one of whom was a former employee who was recently fired for stealing. Elvis then jumps out of his limo and says, spectacularly, “I’ll take you on,” before showing off some of his “karate moves.” As a plus, he was wearing a glittery stage outfit under a DEA jumpsuit while doing this. You can’t make this up.

Tragically, Elvis Presley died a couple months later on Aug. 16, 1977, but he’ll forever be immortalized with a plaque that sits in a grassy area in front of Schoepp. And when it comes to Madison lore, “Elvis breaks up fight” is right there at the top along with “Van Halen trashes Sheraton Hotel and blames it on Journey.”