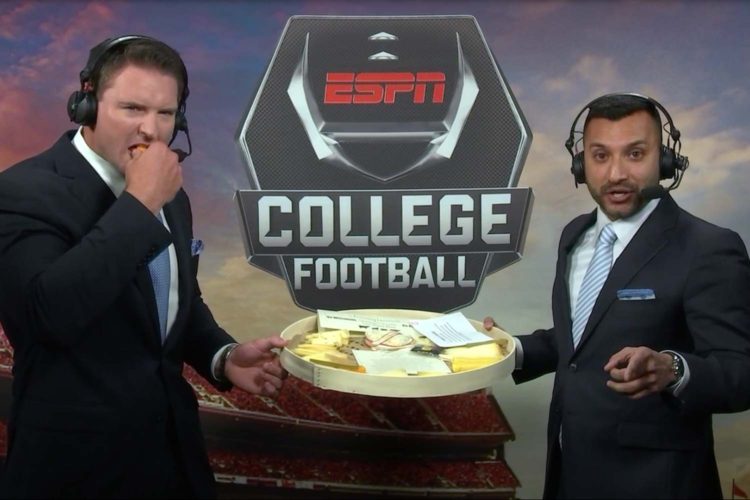 Being a sports broadcaster isn’t easy. (I assume.) You’re constantly traveling, and there’s a lot of prep work leading up to the game because you must learn all of the players’ and coaches’ names and stories. And then next week you get to do it all again somewhere else.

In the world of college football announcing, you must also learn fascinating trivia and quirky anecdotes about the city and campus. Or at least have interns who have access to Google and Wikipedia.

In doing so, the trio learned about everything from architecture to geography to dairy cuisine, and also learned that an underdog football team can sometimes get an early lead but then the other team — the one that everyone expects to win by a lot — starts winning and then does even more winning, so don’t get carried away about an upset brewing when it’s really not.

Anyway, here are transcripts for some of their highlights. 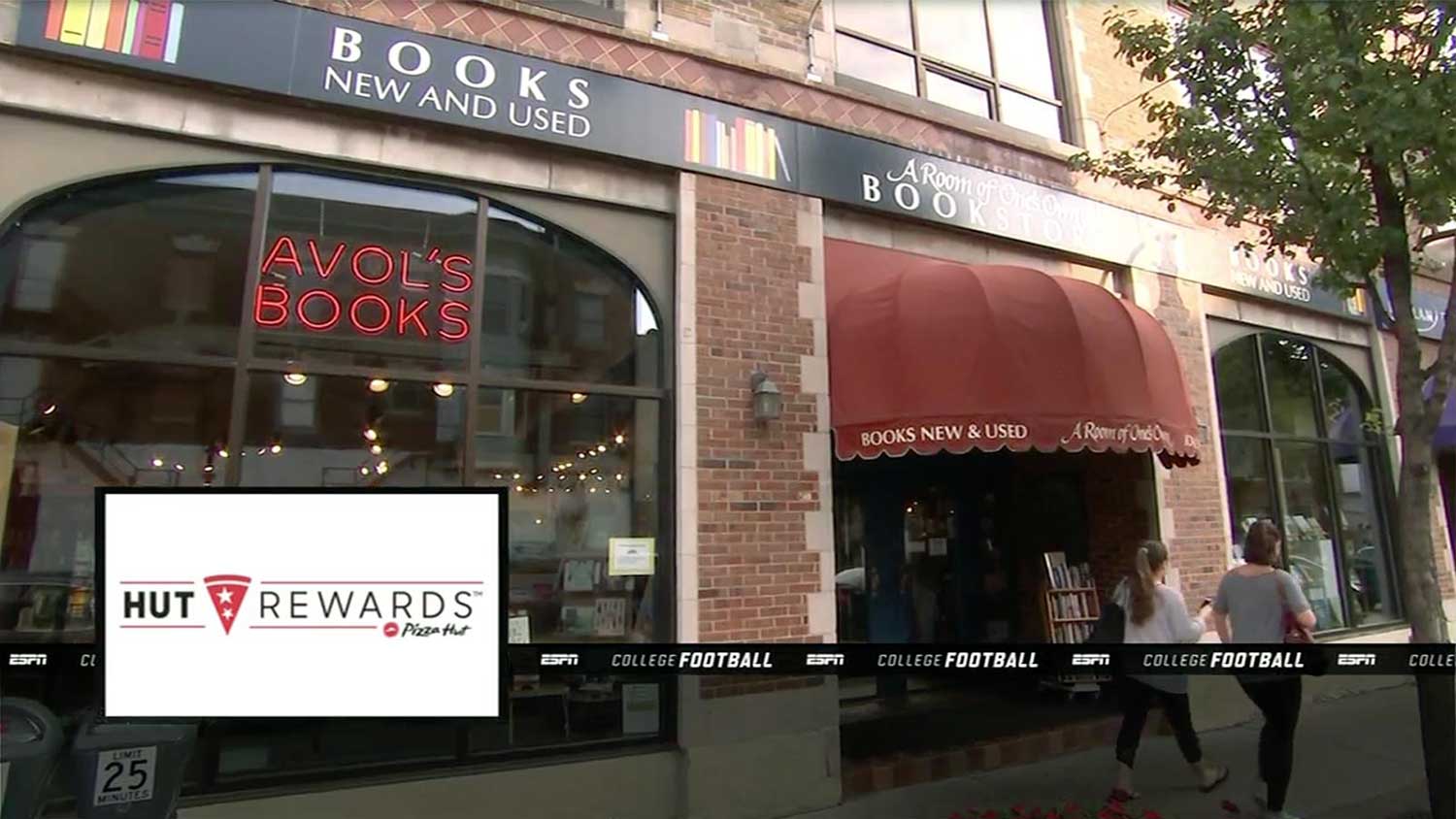 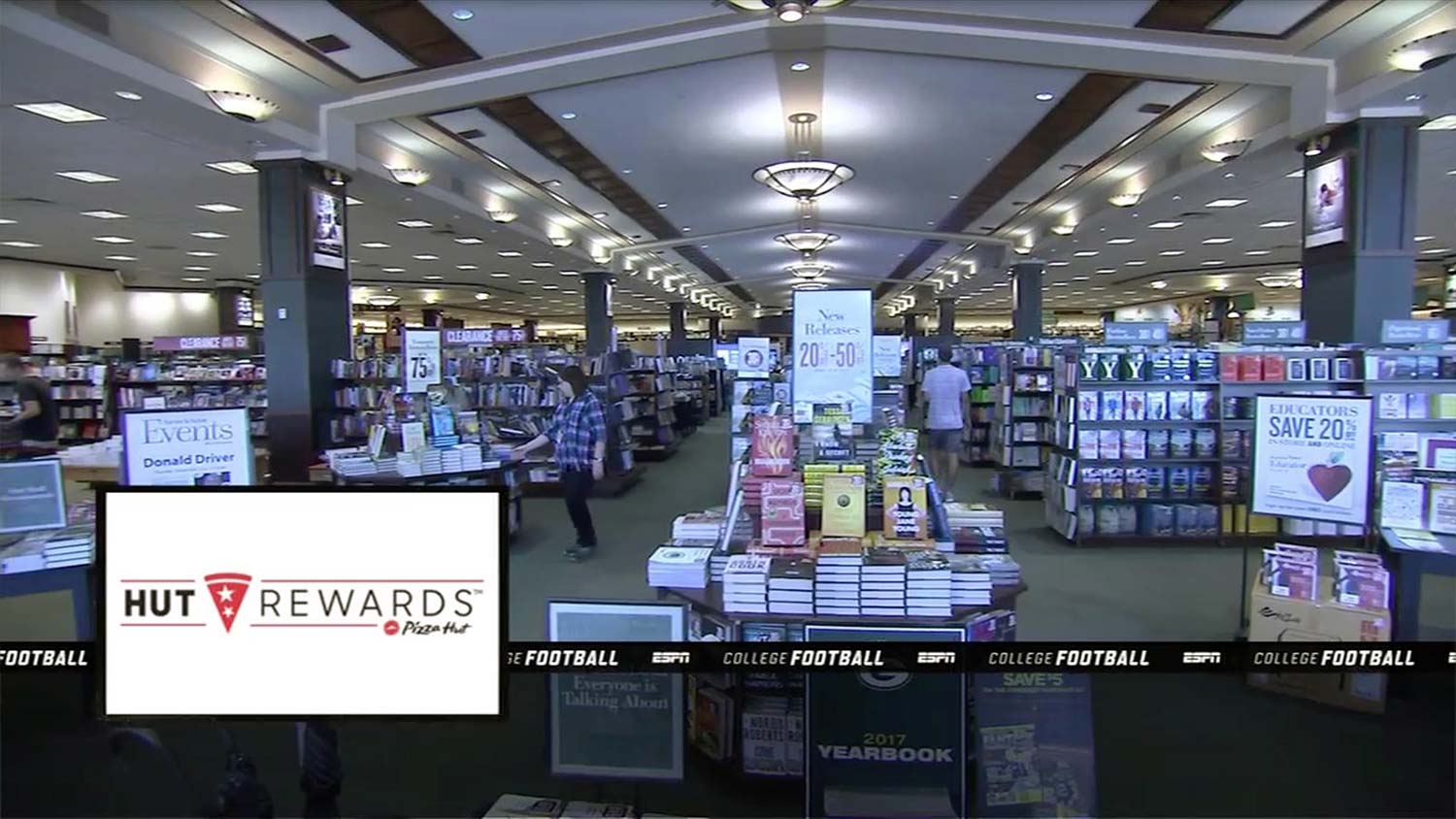 Adam Amin: “Gotta appreciate the fact that since 2012 Madison holds the title of ‘Most Bookstores Per Capita in the United States.’ [Editor’s note: We have found no evidence that this is true. Did he mean libraries?] Smart folks around here in Madison, although I did get a nice note from one of our buddies today that Madison and the state of Wisconsin have as many bars as the state of New York, which has five times the people. So I think books and booze apparently is the name of the game.”

Dusty Dvoracek: “I think they’re proud of that.”

A.A.: “I think they should be proud of that.

D.D.: “The cheese curds we had the other day were off… the… charts.” 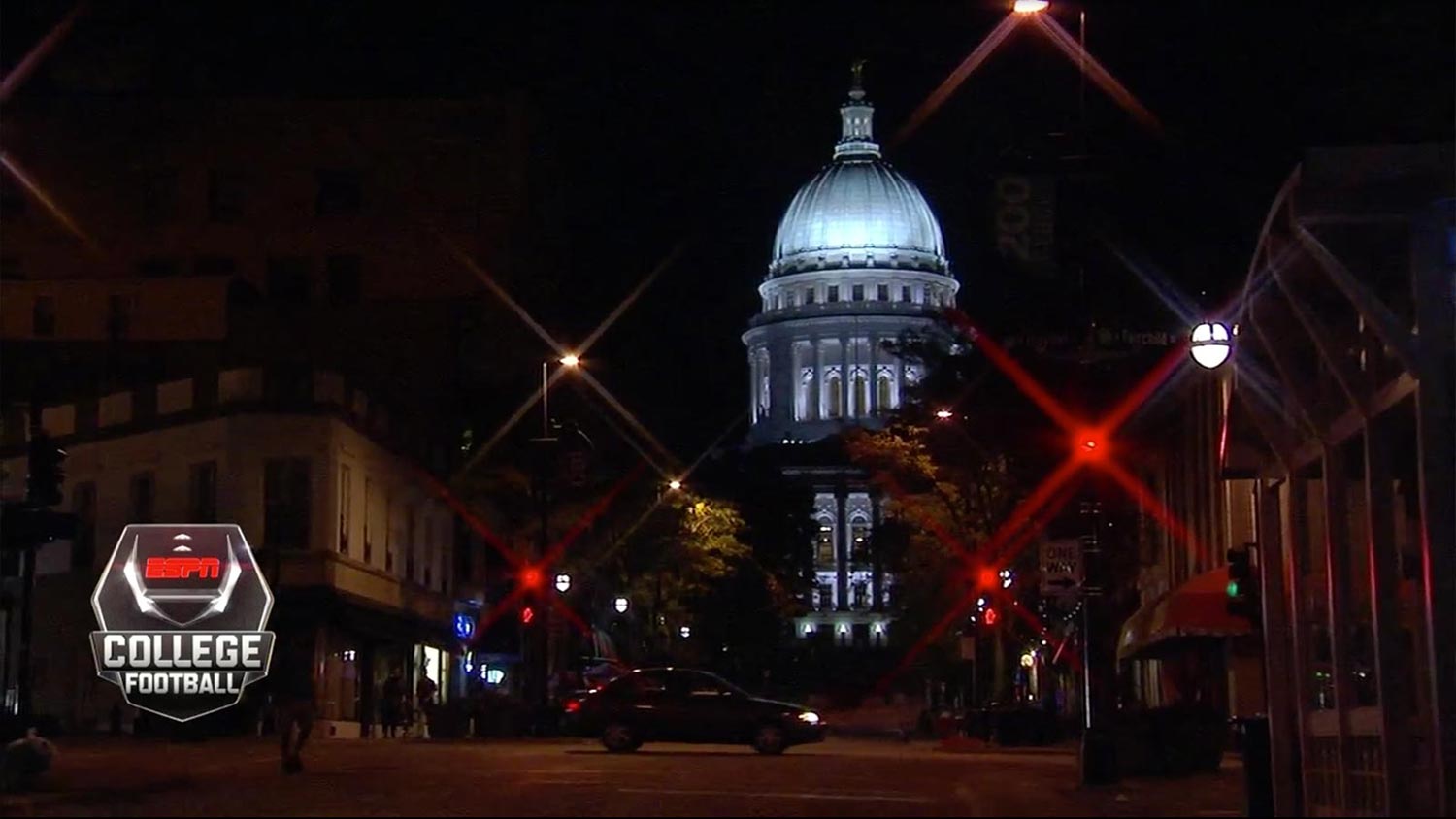 A.A.: “T.J. Edwards (with) a couple of big plays on that defensive series here in the second largest city in Wisconsin — 250,000, many of them college students. They’re a little surprised by the score tonight. We’re in Madison…” 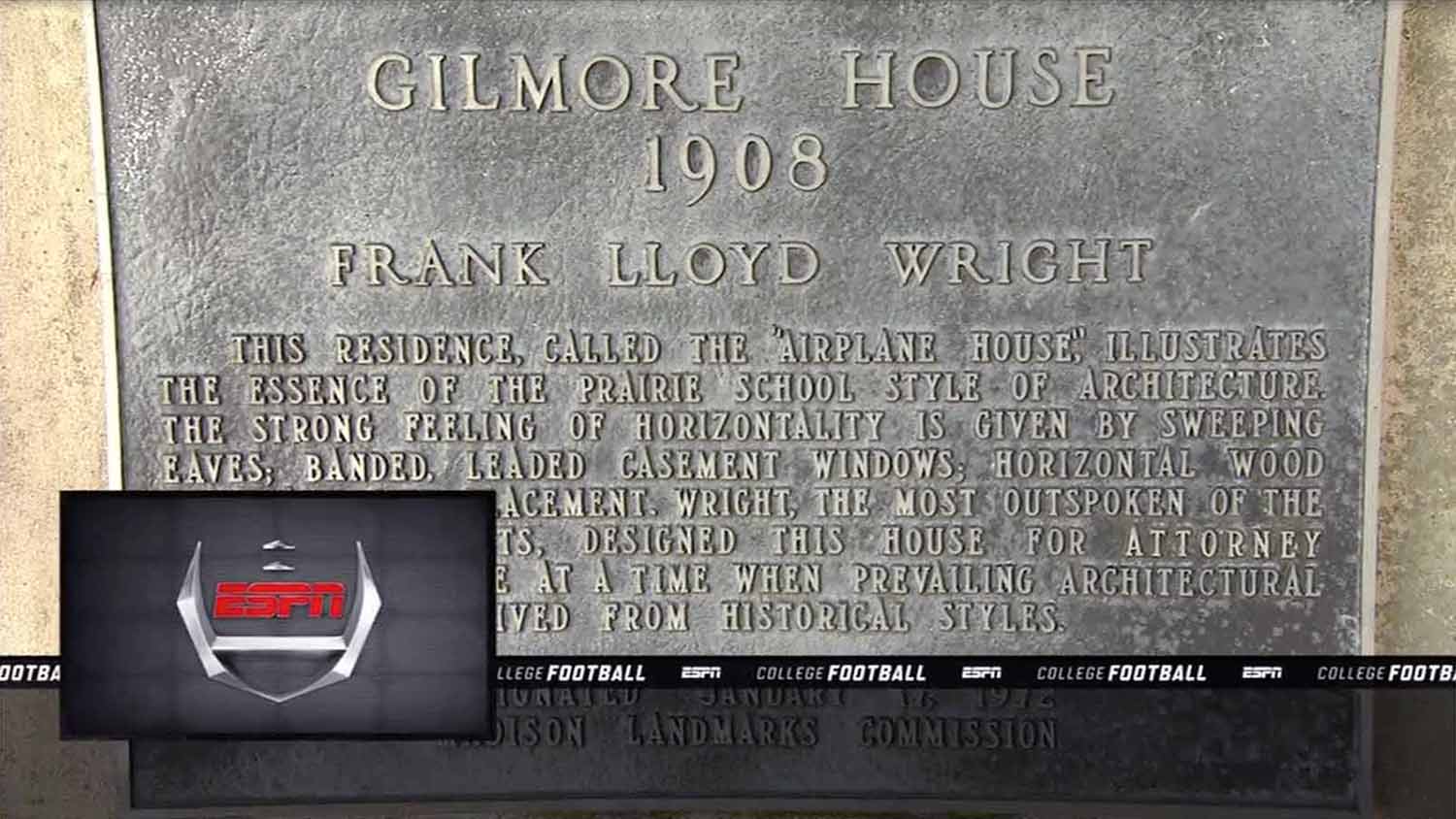 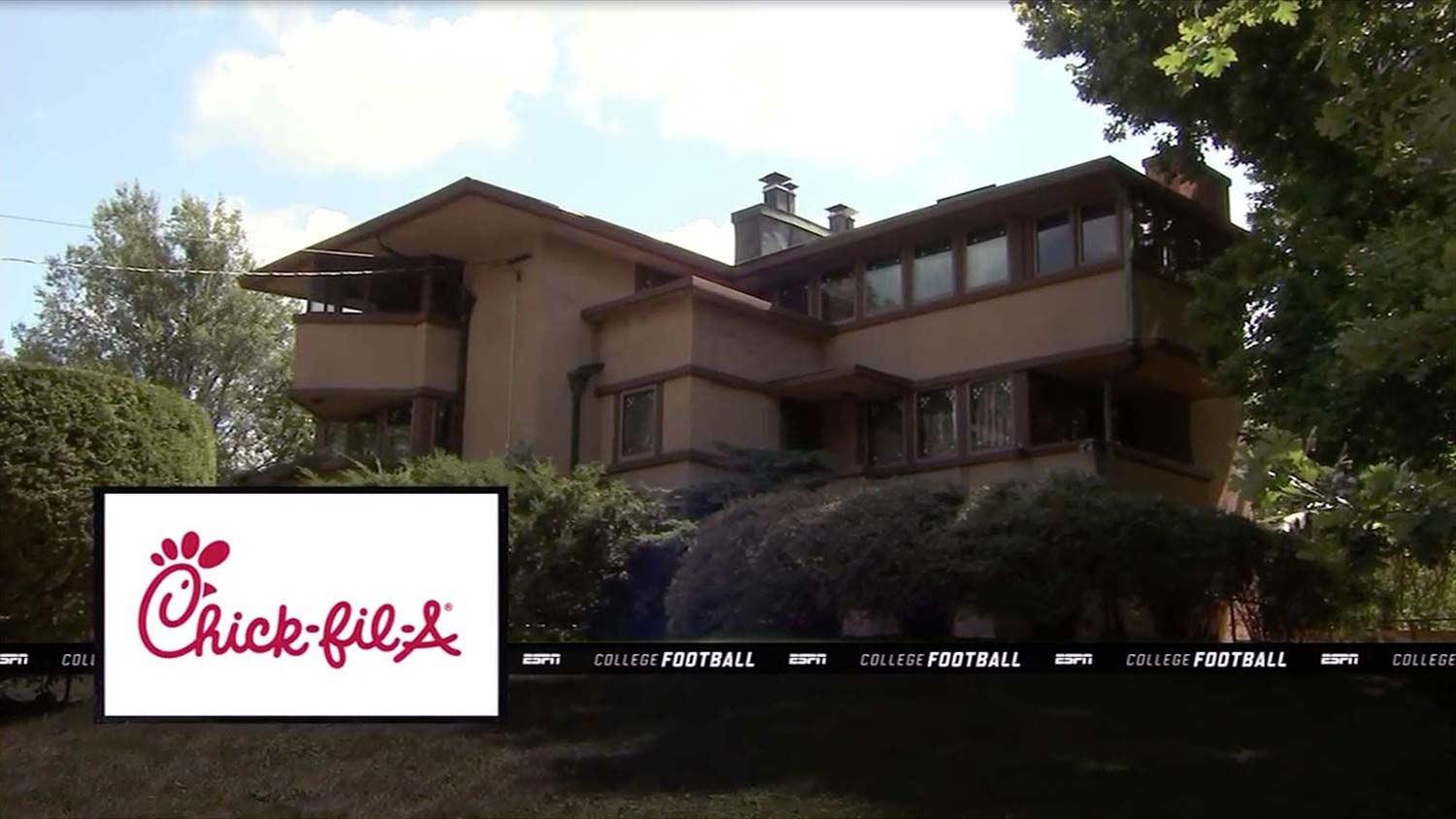 A.A.: “…Look at the Gilmore House, a residence built for Wisconsin professor Eugene Gilmore by the famous architect Frank Lloyd Wright, Chicago born and bred. [Editor’s note: Wright was born in Richland Center, Wis. and grew up in Rhode Island, Massachusetts, Iowa and Wisconsin.] You played in Chicago, former Bear Dusty Dvoracek, Oklahoma standout. (I’m) Adam Amin. Molly McGrath is with us as well. I think a lot of folks are probably tuning in, looking at the score and going, ‘What… is… happening in Madison?’” 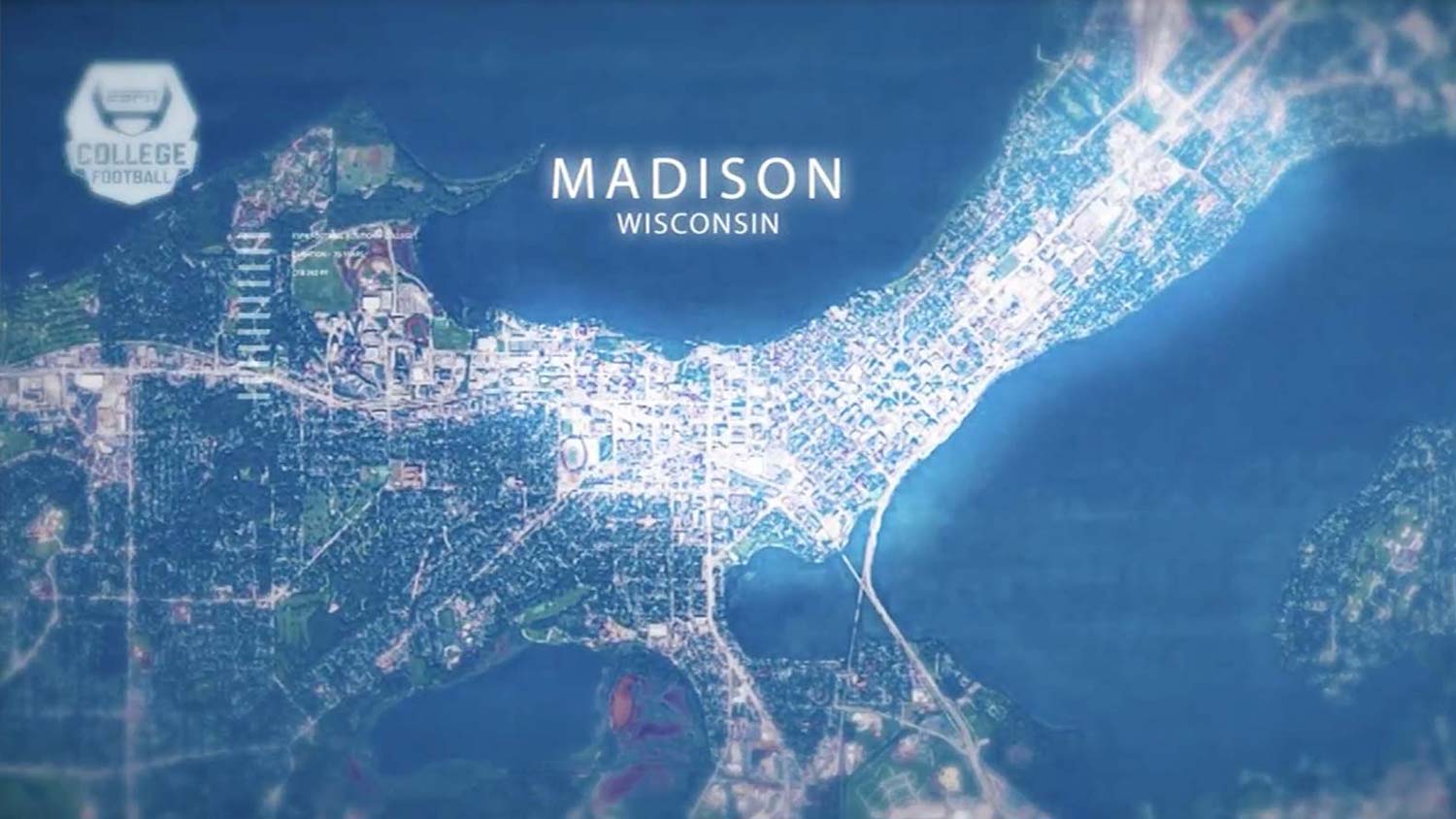 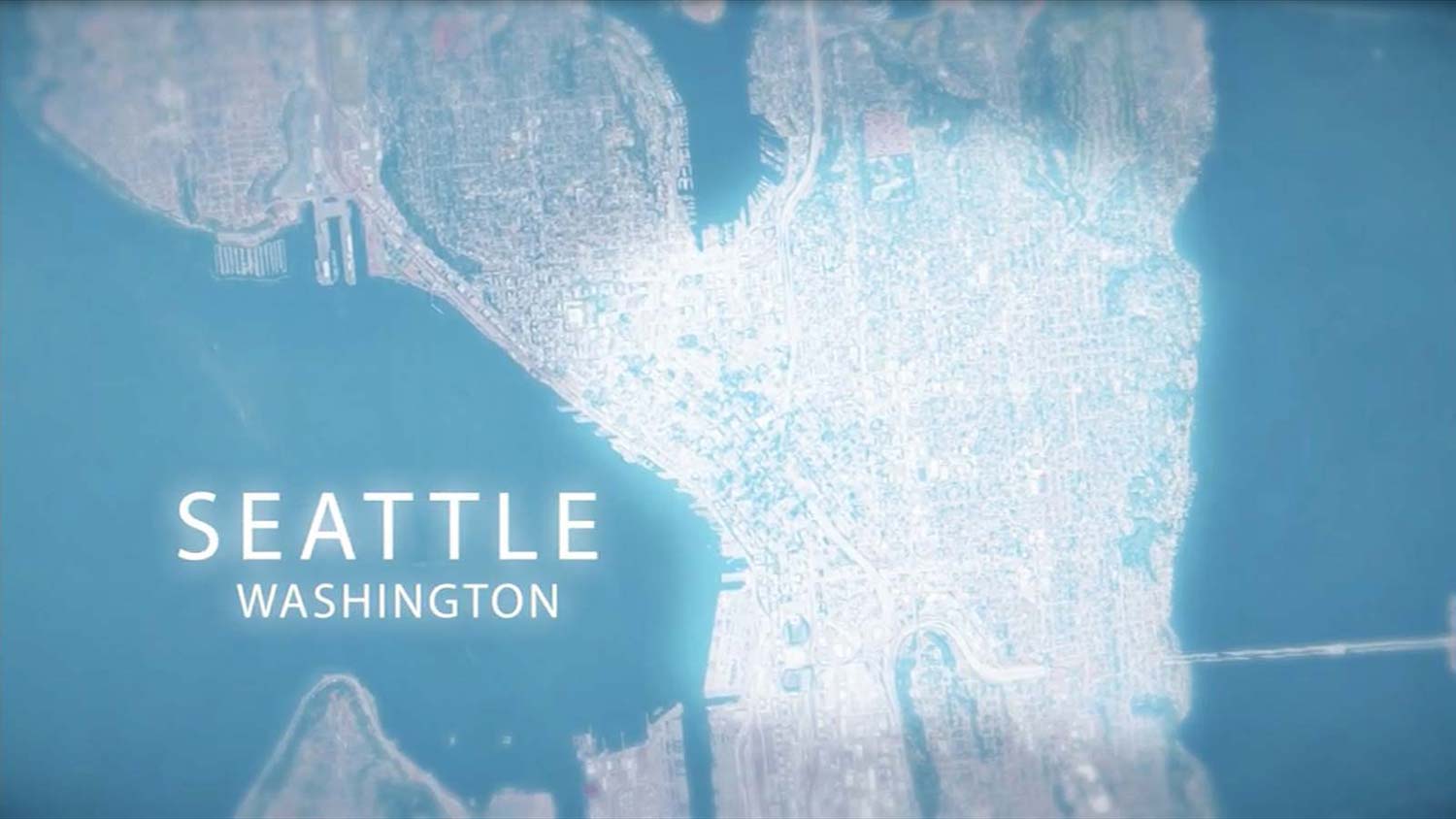 A.A.: “University of Wisconsin classes resume on Tuesday [Editor’s note: It was actually Wednesday.] so let’s give you a little bit of a lesson about Madison. Let’s look at what an isthmus is, all right? Seattle and Madison are the only two major cities in the United States that are built on an isthmus. …” 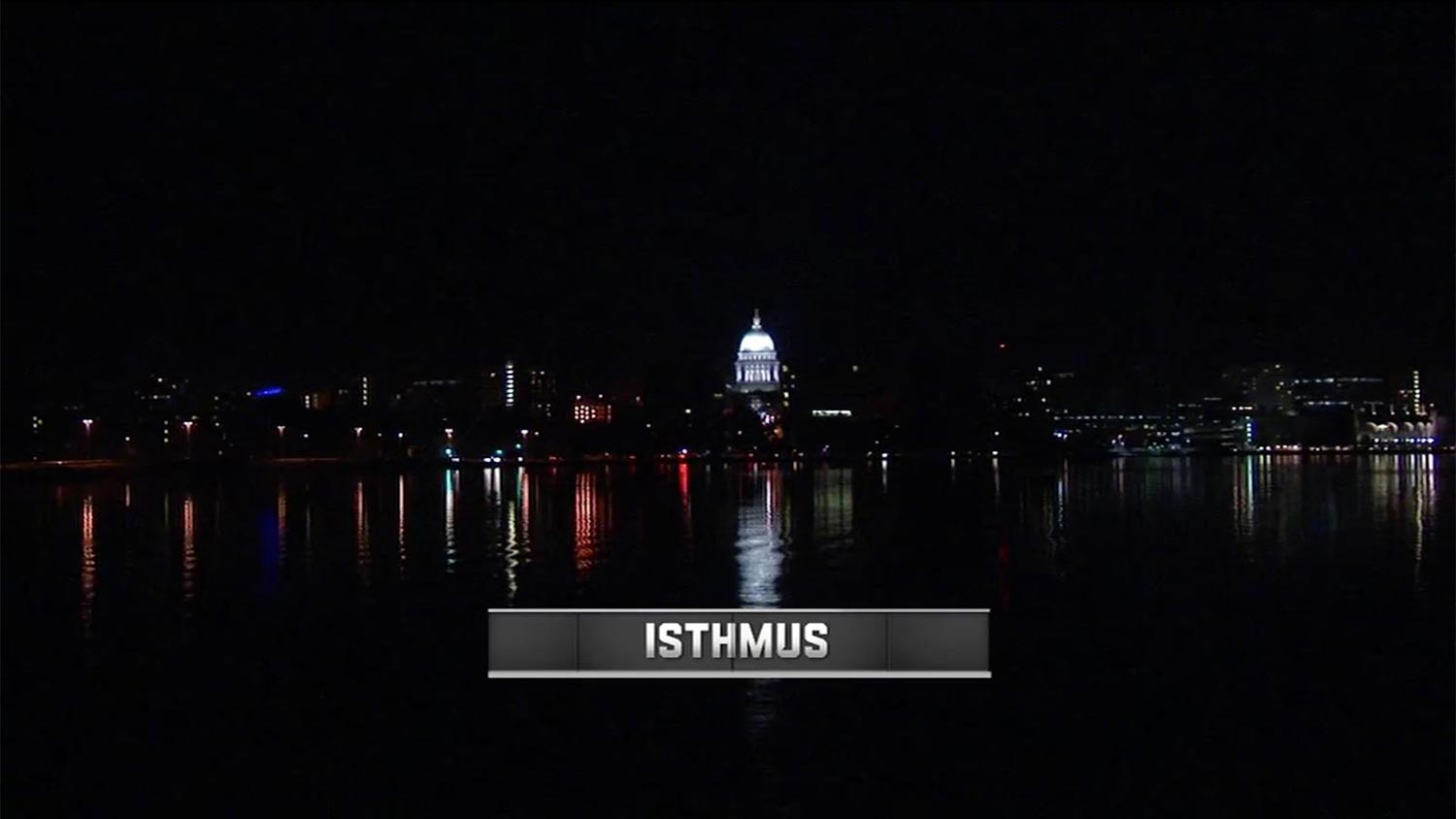 A.A.: “… What’s an isthmus? A narrow piece of land connecting two larger areas across an expanse of water that would otherwise separate them.”

D.D.: “You sure they didn’t misspell Christmas?”

A.A.: “I think they may have. It’s a war on Christmas in the United States.”

D.D.: “I’m a nose tackle who played for Oklahoma. Vocabulary like that is a little above me.”

Molly McGrath: “C’mon Dusty, this is a place of higher learning.” 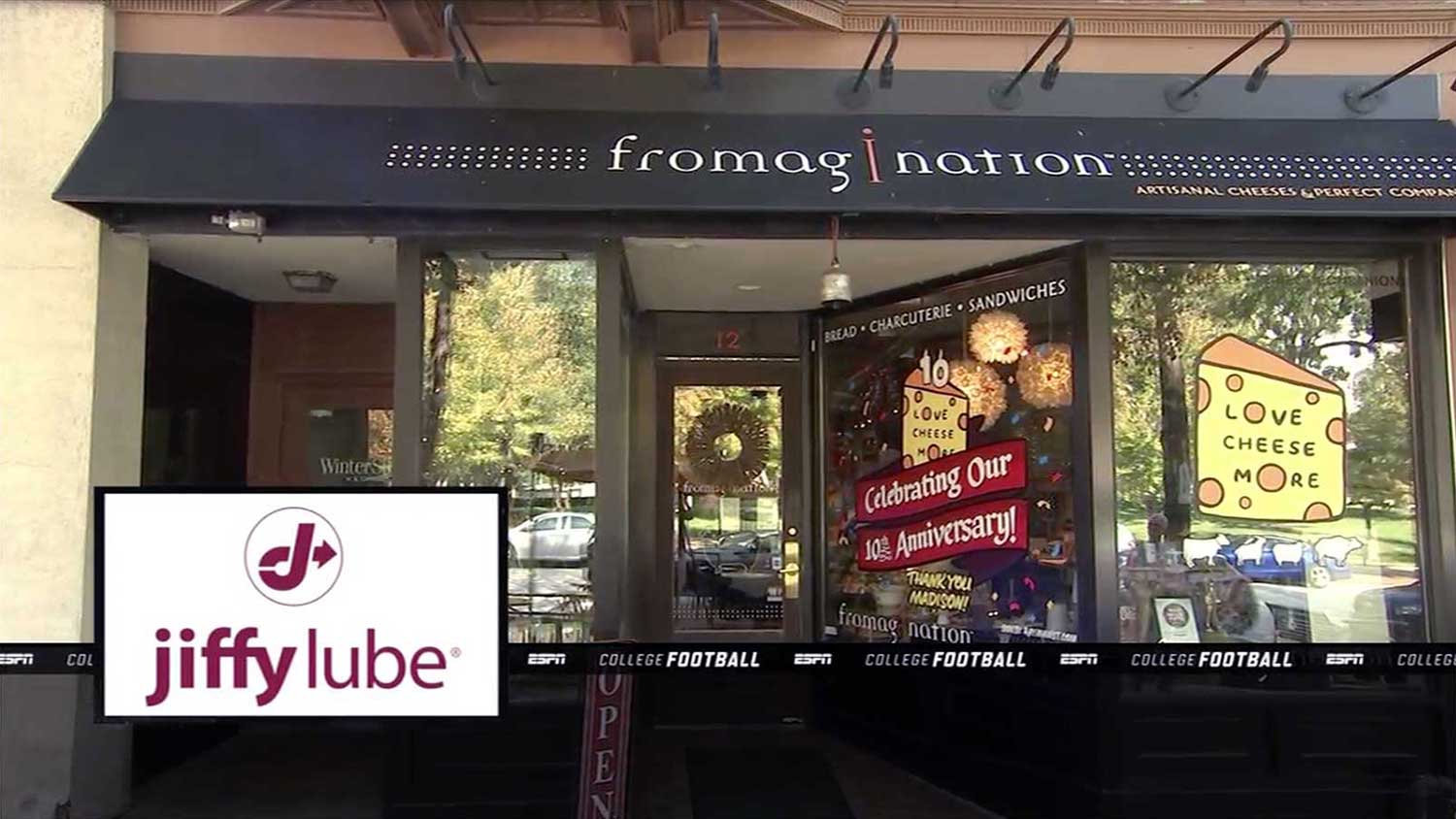 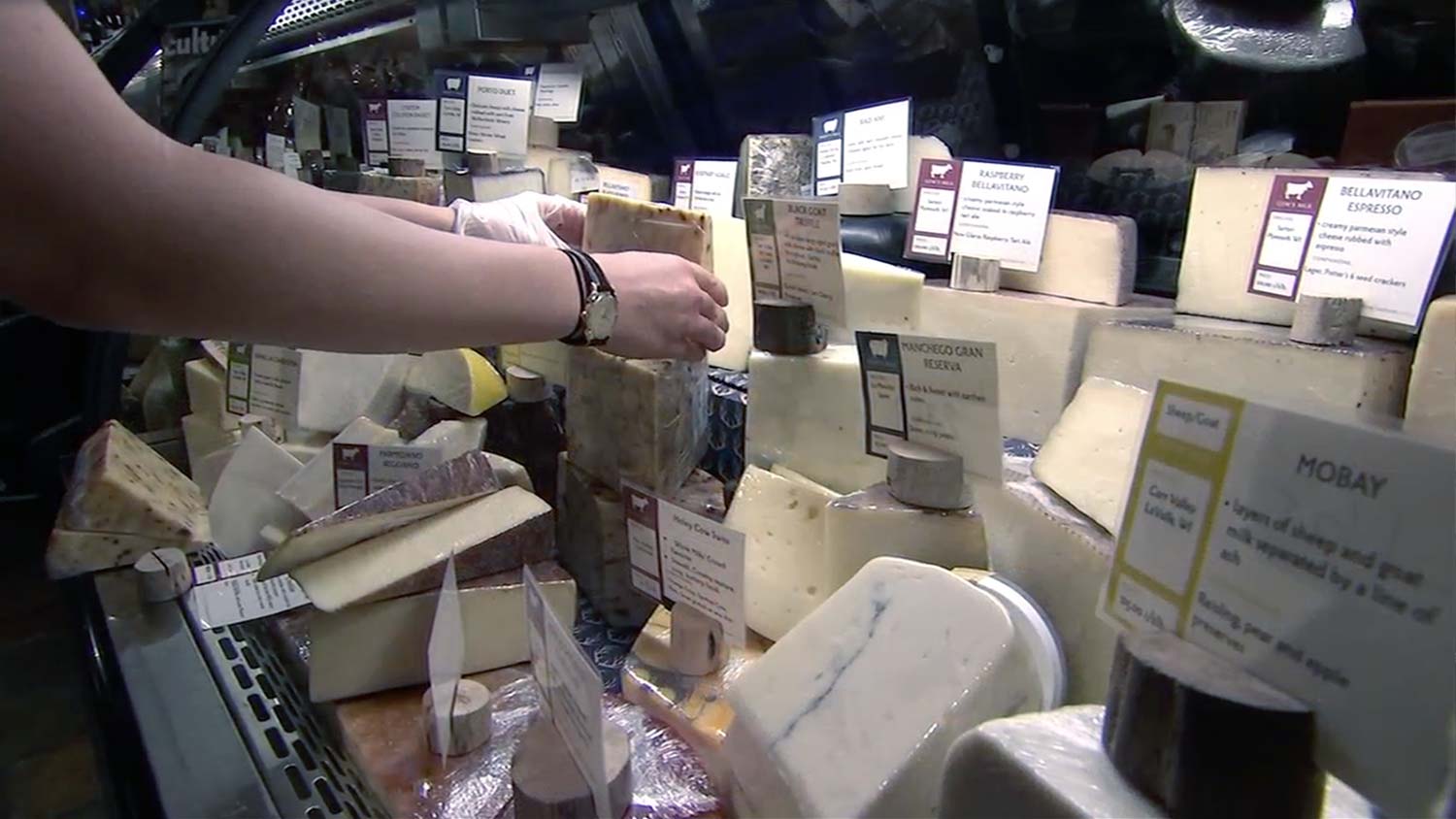 A.A.: “Our friends here in Madison at Fromagee Nation, 10 years strong in Madison. The state of Wisconsin, if you’re unaware — and I’m sure you were — it’s the largest producer of cheese in the United States. It’s the only state to offer a Master Cheesemaker® Program, so if this thing for you and I doesn’t work out, Dusty, I know what our next thing’s gonna be. … It’s all about the presentation, am I right?”

We’ll even forgive the pronunciation.

A.A.: “I feel like it’s all about the presentation so with that…”

D.D.: “Speaking of which, that looks really… is that blue?” 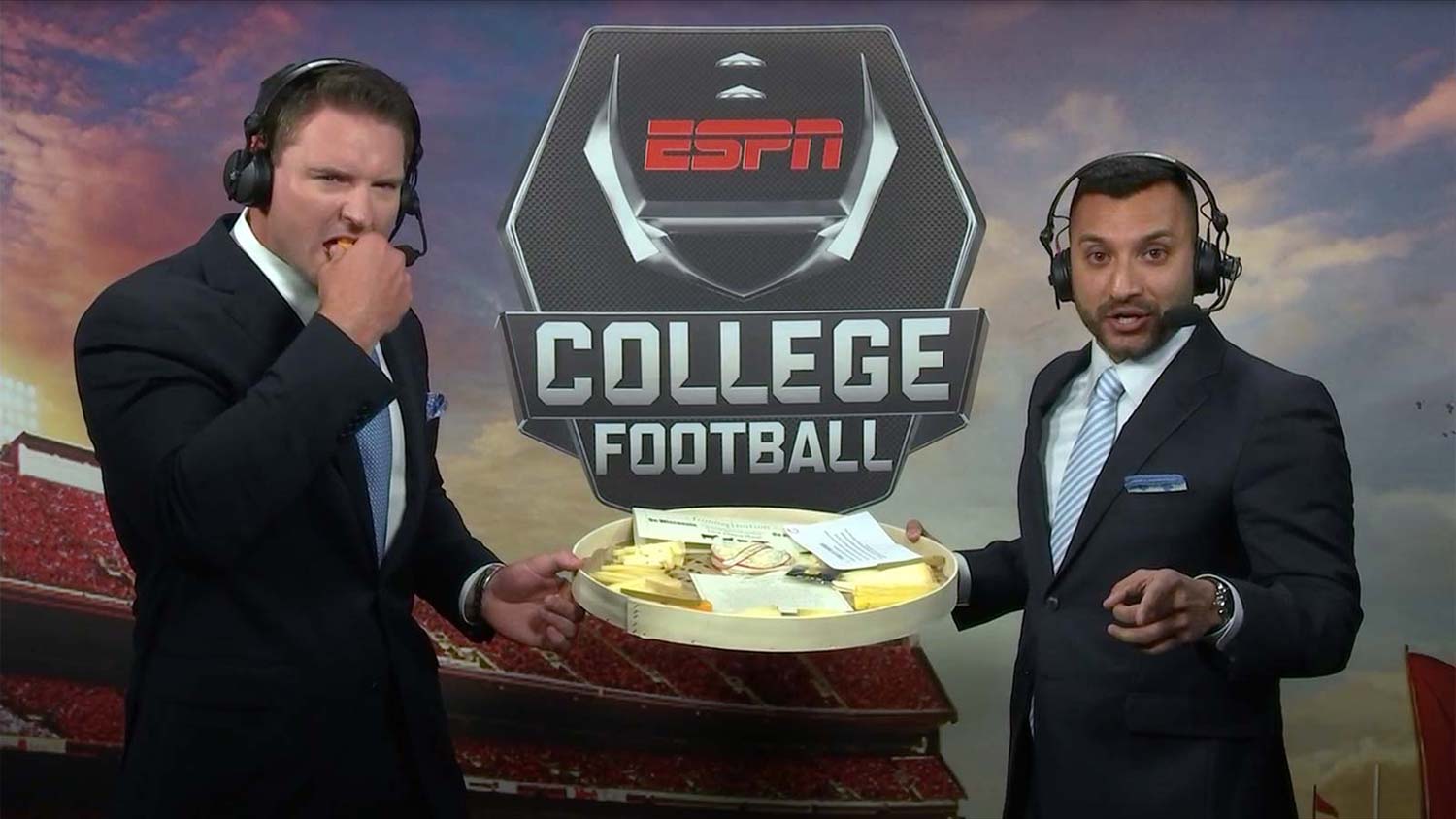 A.A.: “Yeah. That’s the Dunbarton Blue. So this is the Wisconsin Finest’s starting lineup from our friends at Fromagee Nation. They did a great job with this. Molly went to Paris actually at one point during the summer break, before the football season started. I mean, this is equivalent to the Paris cheese I’m sure you were knocking out, right? A little camembert and stuff.”

M.M.: “Yeah, absolutely. I’m a little jealous you guys have a cheese plate going on up there while I’m down here on the sidelines.”

Espn joking about cheese while Shaw rips off a 40 yard run.

A.A.: “…so I’ll just give that to you after the game and you’ll be able to experience it with everybody else.”

A.A.: “It sure is. Bradrick Shaw! Speaking of attractive, the running game for Wisconsin looking very appealing over the last couple drives…”

You can tell how little the ESPN announcers care about this game now as they talk cheese instead. #USUvsWISC #PeavlersSoapBox