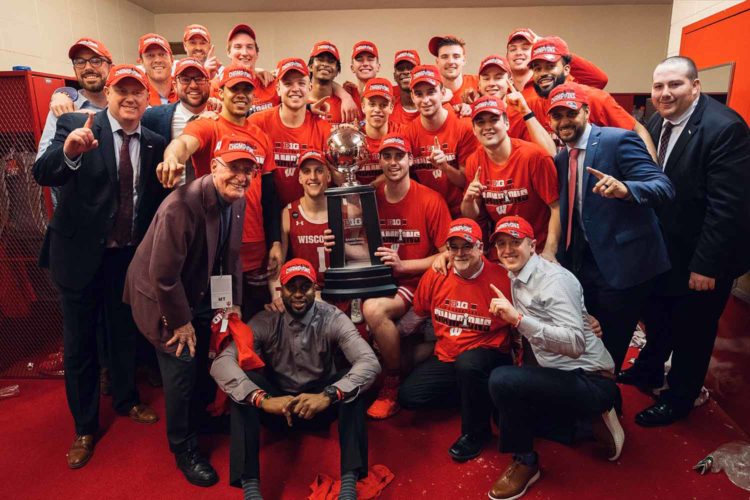 The Wisconsin men’s basketball team experienced a, umm, weird two weeks in late January and early February. But it apparently set the stage, because Bucky won eight straight to end the regular season to earn a share of the Big Ten regular-season title and the top seed in the conference’s tournament.

Then the coronavirus pandemic shut down the sports world, canceling both the Big Ten and NCAA tournaments.

So with no sportsball to entertain on what would’ve been Thursday’s opening round of March Madness, a few websites have run some simulations and projections about what might have been. For example, FiveThirtyEight highlighted the teams that might have provided some magic (and madness) while SportsLine simulated mid-major darling Dayton’s potential road to the school’s first title.

But by far the kindest projection (to Wisconsin at least) came from ESPN’s Seth Walder, who used his colleague Joe Lunardi’s final projected bracket paired with ESPN’s own Basketball Power Index.

Walder simulated the tournament thousands of times, but to mimic the true nature of a one-and-done bracket he published the results of just a single simulation. And naturally the chosen one (No. 2,020) saw Wisconsin — with less than a 1% chance to cut down the nets — beat BYU in the tourney final for Bucky’s second national title, and first since 1941.

If you’re a college hoops fan or general fan of March Madness, read the whole breakdown. It’s a fun “what-if,” and you might have some time on your hands.

This was just one of many simulations out there, and it should be noted that the data set anyone worked with is incomplete; every major conference tournament was either outright canceled or called off after only a few games were played.

But let’s look at Wisconsin’s Midwest Region path to a simulated title, with Lunardi’s seeds in parentheses.

This tracks with the final KenPom ratings, which projects Bucky as about an 8½-point favorite.

The Badgers get a boost from Liberty’s upset of Auburn in the first round. The Flames are in the same rating range as North Texas, so this also tracks.

All-Wisconsin Sweet 16, baby! Given that Wisconsin beat Marquette by 16 at home early in the season, a Badgers win makes sense — especially since the Golden Eagles lost six of their final seven regular-season games.

Not improbable, given that Duke had some bad losses down the stretch and a 3-3 record in the final three weeks of the regular season. Call it revenge for the 2015 title game loss.

Bucky squeaked by the Terrapins at home back in January, and the simulation called for another late three-pointer from Brad Davison to give UW the edge. Maryland did struggle down the stretch, losing three of its last five — but who knows what kind of boost, or drag, the Big Ten tourney could have provided either team.

Both the Badgers (+18.95) and the Cougars (+20.68) are close in KenPom’s total adjusted efficiency margin, with Wisconsin better on defense and BYU better on offense. But personally, I don’t see the NCAA honchos signing off on a Wisconsin-BYU national championship, simply from a ratings/blueblood standpoint.

So this virtual reality saw the Badgers beat Duke on a buzzer-beating three from D’Mitrik Trice and more Davison heroics to defeat Maryland, all before a very interesting final against BYU, which itself had only about a 2% chance to reach the final, per ESPN’s estimation.

Try not to think about what might have been. Or if you’re stuck at home, go find a copy of NCAA Basketball 10 and make it happen for video game real