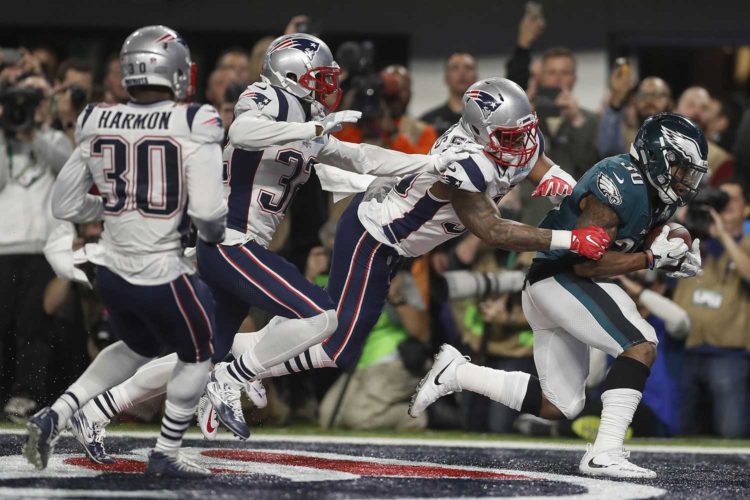 Three years ago, thanks to Russell Wilson and five other former Badgers, Wisconsin was the most represented college on the Super Bowl field. This year, UW landed in a six-way tie for second-place behind Stanford, but there were still plenty of Dairyland connections. Here’s a quick look at the game’s former Badgers, former Packers and Wisconsin natives.

Nothing but respect for my 2017 Super Bowl MVP. One year ago today White, now 26, became only the second player to score the winning touchdown in overtime in an NFL championship game. (The first, and naturally a fellow Wisconsin back: Alan Ameche for the Baltimore Colts in 1958.) On Sunday, White totaled 66 yards from scrimmage on nine touches, including one rushing touchdown. The former fourth-round pick played 45 of the Patriots’ 76 offensive snaps (59%).

An undrafted rookie, Clement totaled 108 yards from scrimmage on seven touches, including one controversial touchdown catch. The 23-year-old played 24 of the Eagles’ 75 offensive snaps (32%) and 17 special teams snaps, which included one 25-yard kickoff return.

A seventh-round selection by the Eagles in 2014, Allen was credited on Sunday with two tackles (one solo). The 26-year-old defensive tackle played 23 of the team’s 76 defensive snaps (30%) plus 13 special teams snaps.

The Eagles safety and special teamer was placed on injured reserve with a knee injury on Oct. 19, which ended his season but gave him extra time for restaurant reservations (and the lack thereof). The 31-year-old was undrafted in 2010 but is now a two-time Super Bowl champion, having also won a ring four years ago as a member of the Seattle Seahawks.

The 28-year-old Milwaukee native started at right guard for the Eagles and played all 75 of the team’s offensive snaps. Brooks played collegiately at Miami (Ohio) and was a third-round pick of the Houston Texans in 2012. He signed with Philadelphia as a free agent in 2016.

A former undrafted rookie out of Northeast Louisiana (now Louisiana-Monroe), Pederson, who turned 50 last week, served as a backup to Brett Favre from 1995-98 and 2001-04. And now he’s a Super Bowl-winning head coach. If this becomes a trend, an early congratulations to Matt Flynn, Aaron Rodgers’ version of Pederson, ahead of his 2032 Super Bowl victory.

The Eagles’ long snapper was, in late 2015, briefly the Packers’ long snapper. The 25-year-old’s other recent employers include Washington’s NFL team and his father’s deli in New Jersey. This year was Lovato’s first full season in the league.

A seventh-round pick of the Packers in 2011, Guy spent his rookie season on injured reserve and was one of the team’s final cuts before the 2012 season. The former Arizona State defensive lineman bounced around with a few teams before signing a four-year contract with New England in 2017. On Sunday, the 27-year-old started and was credited with six tackles (three solo) while playing 57 of the Patriots’ 75 defensive snaps (76%) and 13 special teams snaps.

The 31-year-old veteran defensive lineman signed with and was subsequently released by the Packers several times in 2017. Then, he was signed, released and re-signed by the Patriots in November and December. Jean Francois was credited with zero tackles on Sunday while playing 15 of the Patriots’ 75 defensive snaps (20%).

No Super Bowl appearance or ring this year for the 30-year-old former Packers tight end (2017-17), who rejoined the Patriots in early November. He’s been out since Nov. 27 but arguably didn’t play all season.