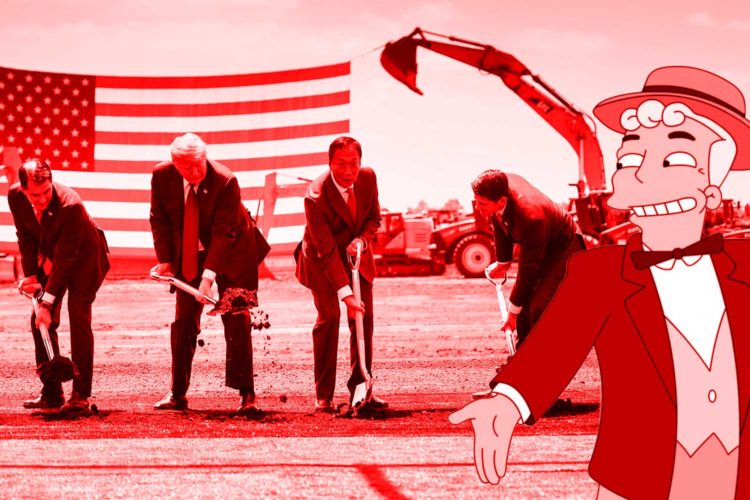 I’m referring, of course, to the classic episode of The Simpsons in which Springfield residents are fleeced by a fast-talking con man selling dreams of a monorail that will never work. Sound familiar? Because the monorail is actually Foxconn.

Reuters is reporting that the LCD screen manufacturer is considering a major pivot. Rather than the 13,000 primarily manufacturing jobs initially promised, Foxconn is now talking about instead turning its Mt. Pleasant, Wis. campus into a “technology hub.” The state shelled out billions of dollars in tax incentives for blue collar jobs, which would be slashed dramatically in favor of research and development. (Or, as Foxconn rep Louis Woo condescendingly says, “knowledge” jobs.)

This is just the latest in a series of broken promises by the Taiwanese manufacturer. First, they were going to make large LCD screens. Then they decided to make smaller ones. Now, Woo says they will not make them at all.

“In Wisconsin, we’re not building a factory,” Woo cryptically told Reuters. “You can’t use a factory to view our Wisconsin investment.”

Perhaps the most infuriating aspect of the whole ordeal is former governor Scott Walker’s inability to do even the slightest bit of research before dealing with Foxconn. Back in 2013, roughly the same thing happened in Pennsylvania. A showy announcement, an exorbitant promise, and then… nothing. Foxconn “faded to black” and the plant was never even built.

Foxconn is already scaling back their initial jobs promise. 5,200 positions by 2020 has become 1,000. It’s unclear when the Taiwanese manufacturer plans to make good on the 13,000 jobs deal they sold to Walker. (And President Donald Trump, the artful dealmaker who treated our state as nothing more than an empty square on a Monopoly board.)

And though Foxconn has restated their intent to fulfill their 13,000 job promise, doing so may be a fool’s errand. The U.S. isn’t equipped to fill that many “knowledge jobs,” says Bloomberg’s Tim Culpan. And the amount of backend and packaging jobs that are still created wouldn’t even come close to touching the figures stated by the initial deal.

Unsurprisingly, the state GOP is trying to pin this all on Gov. Tony Evers, who has been in office LESS THAN A MONTH.

No word yet from Evers

There’s been no response from Evers himself yet, though Secretary of Administration-nominee Joel Brennan says that despite regular communication with Foxconn officials, they “were surprised to learn about this development.”

Even so, Evers can hardly be faulted for Foxconn. State Dems have been ringing alarm bells about the famously shady company since Day 1. At least there was someone trying to show that Foxconn always was more of a Shelbyville idea.