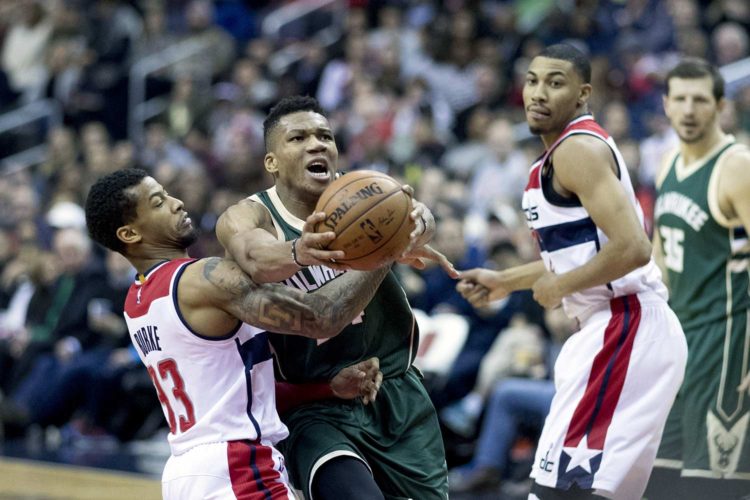 I’m one of those weirdos whose favorite Wisconsin sports team is the Milwaukee Bucks. I didn’t go to college here, so I really only watch the Badgers for football, as my school didn’t have a team (I went to DePaul, so Marquette can go kick rocks, too). And while I do like the Packers and Brewers, I reserve my deepest love for my favorite sport: basketball, and the Bucks.

And thanks to Giannis Antetokounmpo, I finally have a reason to be excited about the Bucks for probably the first time since Ray Allen got jettisoned to Seattle in 2003. The Greek Freak put up truly freakish numbers this past season, shooting .522 from the field and averaging 22.9 points, 8.7 boards and 5.4 assists per game, cruising to the league’s Most Improved Player Award and bona fide superstar status.

But as with anything good in the world, there’s always going to be someone out there waiting to shit in the punch bowl.

In the past three weeks, The Ringer — the sports and culture website started by Bill Simmons — has posted not one but two articles (both by writer Haley O’Shaughnessy, who just made herself a totally powerless enemy) speculating on Giannis’ inevitable departure from Milwaukee, mainly by twisting comments the young star made about Kevin Durant’s move to Golden State.

“A lot of people say they’re going to stay on a team,” the 22-year-old told a Philippine interviewer, “and decide to move to a different team. But you guys got to remember: A guy might want to stay on a team, but the team [may not] do the right things and the right moves for the player to become great.”

Many took this as a subtle swipe at the Bucks, who have been marred by front office drama throughout this off-season. When general manager John Hammond left for the Orlando Magic, the Bucks’ ownership group failed to promote his intended replacement — Justin Zanik, whom the Bucks hired away from the Utah Jazz specifically to succeed Hammond — and instead went with Jon Horst, a complete unknown to many.

But what’s problematic about O’Shaughnessy’s articles is that they’re really nothing more than reactionary clickbait. Is it possible that Giannis will eventually leave the team? Absolutely. Sports are a business, and the Bucks — never forget — have a history of doing completely knuckleheaded things (like trading away arguably the greatest three-point shooter in history at the prime of his career, or drafting yahoos like Joe Alexander and Yi Jianlan). But there are still four years left on Giannis’ contract, and to speculate about what he’ll be doing four years from now is pointless. Four years is a lifetime in basketball — if you don’t believe me, just ask the New York Knicks.

But I’ll let Ringer commenter PJHIV take it from here:

“This is such a trash article. At least two years too early for this. We are finally exciting to watch for the first time in 15 years. Can all the pundits just STFU about a Giannis departure and let us worry about that when the time comes. All you’re doing by putting it out there is planting it in his head that he “should leave” Imagine 4 years of articles saying why he might leave, he’s going to start thinking “shit, if everybody is saying it, maybe there’s a reason and I should.”

If the Ringer is going to pick apart every single quote, tweet, interaction with Giannis for the next 4 years, that’s going to be super irritating. This isn’t reporting, this is straight up fabricated speculation.”

Hey dude, you ever wanted to write for The Bozho?