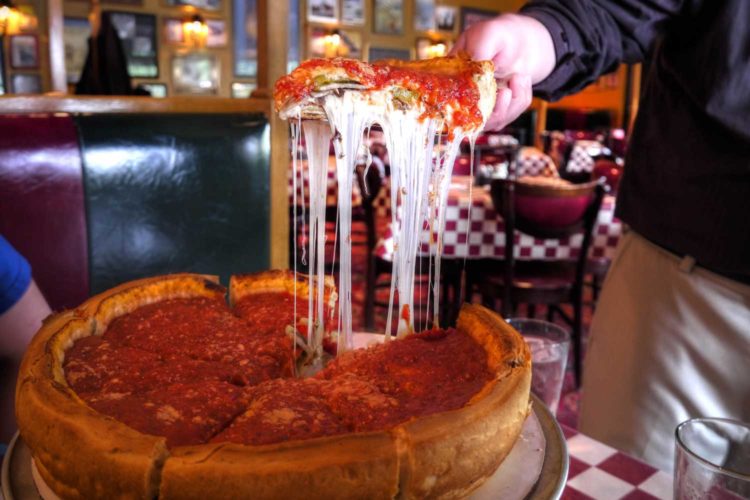 Giordano’s, a Chicago-based pizza chain, is coming back to Wisconsin with locations in Madison and Kenosha, according to their “Opening Soon” page. They previously had a location in Milwaukee, though it closed at least a decade ago, leaving the state Giordano-less.

The restaurant specializes in stuffed pizza, which is a different breed than the Chicago deep dish peddled by spots like Lou Malnati’s and Pizzeria Uno. It features a butter-laden ring of doughy crust around the pan, and an inordinate amount of mozzarella sandwiched between dough. The top crust is so thin that it’s not very noticeable under the sauce, but it’s there.

As I learned through my extensive research while attending college in Chicago, Giordano’s spinach stuffed pizzas are the best thing on the menu. They mix fresh spinach with even more cheese and of all things, poppy seeds — at least, they used to. I’ll enjoy finding out whether those poppy seeds are still in there.

And for those of you who turn your nose up at Chicago-style pizza because it’s a “casserole“ (that probably includes a lot of Chicago expats), you’ll be glad to hear their Chicago-style thin crust is pretty tasty and familiar, too. It’s a leavened cracker crust cut into squares. In both cases, they proudly call out using Wisconsin cheese on the menu, so it’s about damn time they got back here.

We have no specific location information yet, but we’ll let you know when we do. Any guesses? My money’s on Middleton, though I selfishly hope it’s East Side or Sun Prairie. Either way, I’m hyped.