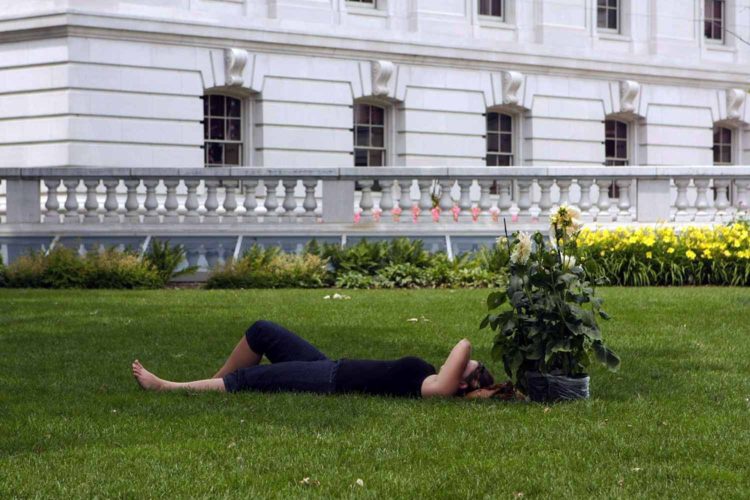 Who are the ambitious, early-rising golden people of Madison? And how much better is life for them at the Dane County Farmers’ Market? Being a garbage person, I typically only know it as a heel-to-toe snail race. I headed to the Capitol Square bright and early last Saturday. The simple goal? To learn just how long a lap around the Square fluctuates throughout the day. Below are my findings.

The rules: I entered and exited at King Street and did not stop to purchase items during timed laps around the Square. I simply walked at the group’s pace. When there was a clear opening to walk a bit faster, I took it. When I was pinned between strollers, I accepted my fate.

I predict this initial lap would have been about three minutes faster if, at Pinckney Street, I hadn’t been on the bumper of a plant wagon, which is handy for people who need to carry a lot of plants and a burden for those who don’t. As expected, most stands were easy to access, samples were plentiful and you could probably snag some cheese bread in under a minute.

8:30 is the time I always tell myself I’ll get to the Farmers’ Market, so it was nice to see what life would be like in a less lazy flash sideways. This lap was still relatively painless until I walked directly in front of two women conversing about how “nobody likes Megan’s boyfriend, and she’s kind of a bitch about it.” I honestly didn’t know people talked like that, or talked loud enough in public to let people know that they talked like that. Even without a wagon holding me down, Pinckney proved again to be the slowest street.

I was expecting the real snail crawl to begin around 10:30, so I was saddened to learn that this was the beginning of the end. I was in a true-to-form Farmers’ Market Shuffle (watch out ’85 Bears). Steps were short, the back-up at Stella’s was long and the people who walked against the grain were truly my greatest enemies. I thought the story about Megan was a one-off until I was #blessed when two other women talked for two straight blocks about the trials and tribulation of their Snapchat replies.

This lap was as brutal as expected. The State Street and King Street exits felt like Penn Station, except there was literally only two options of places to go: left or right. ALL ABOARD. The biggest surprise of the morning was learning that there was little time difference between this and the 9:30 lap.

True peak-time market goers either powered through or gave up, letting up on the foot traffic — although I ended up behind a pack of children along Carroll Street which slowed things down since historically children have shorter legs.

The official end time at the Saturday market is 1:45 p.m., but by 12:30 a number of stands were already packing up and dilly-dalliers were picking off the rest. This resulted in an almost completely empty left-hand walking lane. I thought I might match, if not break, some earlier lap times until the brisk pace came to a halt at the King Street bottleneck — but alas, I had made it!

While I still think the Farmers’ Market is a magical place, I wouldn’t recommend walking through it six times in one morning (unless you wanna accomplish 10k steps at a very slow pace). If you head there during peak hours — 9:30 to 11 a.m. — be patient, avoid abrupt stops and don’t talk shit about Megan.