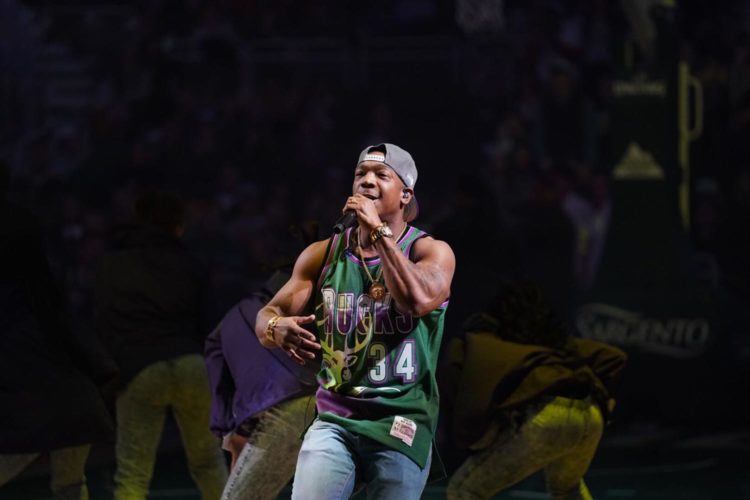 You may remember the New York rapper for hits like “Mesmerize,” “I’m Real” and “Two Years in Prison for Tax Fraud.” But if you’ve seen his name pop up this year, it’s likely because of his involvement in the Fyre Festival — and subsequently, the two documentaries released last month chronicling its spectacular failure. And now Mr. Rule is in the news again as his strange journey takes a detour in Milwaukee.

On Saturday, Ja Rule performed at halftime of the Milwaukee Bucks’ 140-128 victory over the Minnesota Timberwolves. As part of a ’90s Night promotion, fans expected to be treated to a night of high-caliber basketball and throwback rap goodness. They only got one of these things.

For starters, Ja Rule is more of a 2000s thing than a ’90s thing (though he did rectify it somewhat by wearing a legitimately dope throwback Ray Allen jersey). But semantic issues aside, the fact that Ja’s attempts to pump up the crowd at Fiserv Forum were met with dead silence wasn’t very encouraging.

Ouch. Even by “crowd full of mostly rhythmless white people” standards, that’s embarrassing. And to make matters worse, Bucks star Giannis Antetokounmpo came out to warm up at the end of the set, which might as well have been a giant hook used to yank the rapper off the stage. And in Milwaukee, it’s not like you’re not going to get upstaged by The Greek Freak.

There’s a good 3.5 minutes left of halftime, Ja Rule is mid-song and Giannis is already out shooting. pic.twitter.com/sPoyVnpI7x

This may be low-hanging fruit, but it was like the Fyre Festival of halftime performances. Even the T-Wolves — who took an actual, concrete loss on the game — had jokes, referencing Ja’s instant classic statement on his Fyre Festival involvement in a tweet.

Naturally, Ja didn’t take too kindly to these shenanigans, so early Sunday he did what any rational person would do. He put a curse on the Timberwolves.

You just jinx yourself talking to the GOD this way… your CURSED NOW!!! You won’t win a championship for the next 30 years… AND KAT IS LEAVING!!! Apologize and I’ll lift the CURSE!!! 😘 kiss of death… https://t.co/RzUn4vKx2Y

I really hope this works out for Ja Rule, but given his recent history the only thing I can see this leading to is the T-Wolves winning a title.