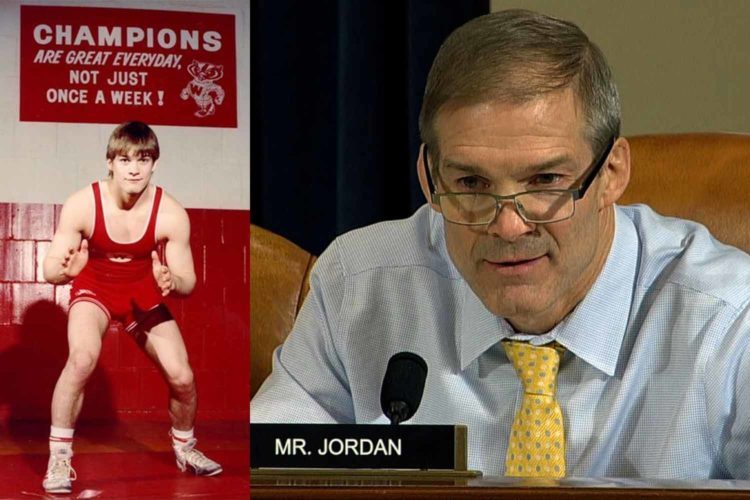 If you’ve been following the Donald J. Trump Impeachment Extravaganza, you’ve assuredly seen Jim Jordan. The squat, 55-year-old Republican from Urbana, Ohio is instantly recognizable for his constant lack of a suit coat and unquestioning support of the president.

But are you in the right headspace to receive information that could possibly hurt you? Jim Jordan is a UW alum! I just learned this. And Jordan was not merely some dude who happened to go to the school, either. He was one of the greatest wrestlers ever to don a cardinal and white singlet.

“He was always aggressive”

Before coming to Madison, Jim Jordan was a high school wrestling legend in his native Ohio, with a career record of 154-1. He continued that staggering success at Wisconsin, becoming a two-time NCAA champion in 1985 and ’86 and eventually earning spots in both the University of Wisconsin Athletic Hall of Fame and the National Wrestling Hall of Fame.

“The one goal I had when I came here was to be a national champion,” Jordan told the Wisconsin State Journal in 1986.

In the world of wrestling, Jordan’s doggedness was a huge asset. Russ Hellickson, his coach at UW, spoke highly of his tenacity.

“I can look back on all of our champions,” Hellickson, himself a former Badger, told The Capital Times in 1986, “and with nobody — with the exception of Jim — could you expect the same type of match, no matter who he was wrestling, every time he stepped on the mat. He was always aggressive.”

Hellickson, a Stoughton native and former Olympian, left for (The) Ohio State University in 1986. That same year, Jordan graduated from UW with a degree in economics — presumably of the “trickle-down” variety. He followed Hellickson to Columbus, becoming an tOSU assistant coach in 1987 while pursuing a master’s degree in education. Jordan remained on staff until entering politics in 1995.

After stints in both houses of the Ohio state legislature, Jordan was elected to the U.S. Congress in 2006, representing Ohio’s fourth district. (One that’s now comically gerrymandered.) Since then he’s built quite a reputation in the GOP as a fighter. Currently, his signature character of “hotheaded jock asshole” is being used to full effect as he huffs and puffs his way through the impeachment hearings. And while it’s fun to mock his intense peaked-in-high school energy, Jordan is much less funny when it comes to his policies.

He is a guy who John Boehner — John Boehner! — once called “a legislative terrorist.” Jordan is staunchly anti-choice, advocating for Ohio’s draconian abortion bill. He’s voted against measures meant to take on the climate crisis. Jordan has a shady relationship with drug companies. And during the Trump regime, his Freedom Caucus has become the go-to misdirection squad for POTUS.

Jim Jordan once said, on national television, that he’s never heard Donald Trump lie. But his support of the president shouldn’t come as a surprise. It seems he’s been turning a blind eye to cruelty for quite a while now.

In 2018, explosive reports emerged that former Ohio State University team doctor Richard Strauss had serially sexually abused male athletes from the 1970s through the ’90s. Patients called his behavior so commonplace that it was an “open secret.”

“Everybody used to snicker about how you go into his office for a sore shoulder and (Strauss) tells you to take your pants down,” one former Buckeye said.

According to some wrestlers, it was freely discussed in front of the coaching staff and Jordan looked the other way. But the Congressman said he was never made aware of Dr. Strauss’ predatory behavior, and last spring Jordan claimed the absence of his name in an investigation by the university absolved him of any wrongdoing.

However, the alleged inaction came under the microscope again last month. A former referee said in a lawsuit that he had told Jordan directly about an incident involving Strauss, who died by suicide in 2005.

“I wish Jim, and Russ (Hellickson), too, would stand up and do the right thing and admit they knew what Strauss was doing,” said the man, identified as John Doe 42.

I can’t think of a better way to describe Jim Jordan: really good at wrestling, and fucking terrible at basic human decency.