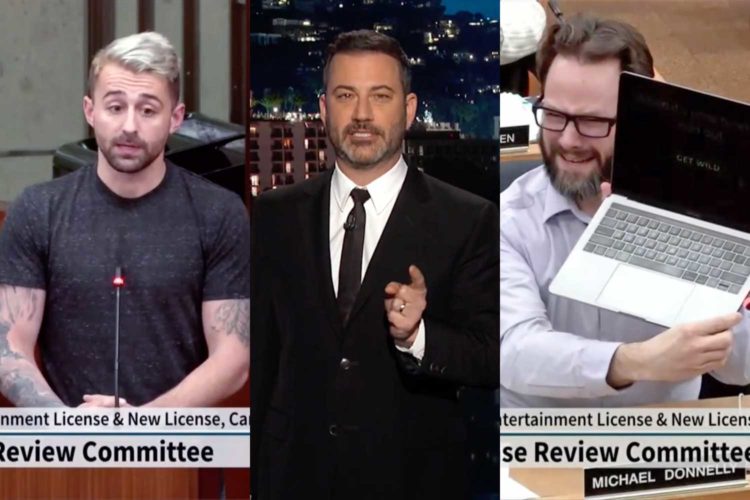 Normally it’d be a pleasant surprise to wake up and find out you were on a talk show last night. But that might not be the case for Austin Carl.

The embattled owner of Canopy — a new nightclub in the former Plan B/Prism space on Willy Street — is feeling some serious growing pains. For one thing, he can’t seem to decide on what exactly Canopy is. A club? A coffee shop? And maybe a combination yoga studio and dojo? Carl has said it will be all of these things at various times, and his indecisiveness in part caused the city’s Alcohol License Review Committee to delay a permit to serve liquor, less than one week before Canopy’s grand opening.

And that was all before Jimmy Kimmel got wind of things.

Carl’s appearance before the ALRC on Jan. 15 was a bit of a trainwreck. The 25-year-old DJ, Army veteran and computer engineering student failed to answer basic questions about his business plan — something which seems important — and he was also dunked on by committee member Michael Donnelly.

“I want to make sure I heard something right,” asked Donnelly. “You’re saying your vision is not a nightclub and this is not a place for people to get wild? Is that what you said?”

“I’m sure if we checked the records that is probably the case,” replied Carl.

Donnelly then pulled out his laptop. “Is this your website? It says ‘get wild’?”

Madison author Greg Zorko’s tweet about the meeting went viral on Saturday, and then a local curiosity went national: Last night, ABC’s Jimmy Kimmel Live! aired a clip of the exchange (below; skip ahead to 7:42).

Not a great look for Carl, but it may be a star-is-born moment for Donnelly: Kimmel thinks he should be asking questions in President Trump’s impeachment trial. (Donnelly had a perfect response, btw.)

“It’s concerning when an applicant’s concept doesn’t seem to have been nailed down yet,” Donnelly tells The Bozho. “ALRC’s mission is to look out for the health, safety and welfare of the community. Part of that is seeing if a licensed establishment would be a good fit for the location. If we don’t know what kind of business it’s going to be, it’s very difficult to make that assessment.”

Besides the business basics, residents in the Wil-Mar neighborhood have serious concerns about noise and inclusivity. Also troubling: landlord Chuck Chvala’s lease includes a provision that restricts Canopy’s ability to host “urban music” events. This is yet another bullet point in the city’s long, infuriating war on hip-hop, and its significance had to be explained to Carl by a reporter.

Today, an unidentified person at the club told The Bozho via Facebook message: “We have found the media to not have Canopy’s best interests at heart and look to abstain from making any comments.”

For now, Canopy exists in a gray area. While it did open its doors on Saturday, it did so without the ability to serve the drink specials it advertised. Carl is scheduled to appear before the ALRC again on Feb. 19 to restate his case, perhaps with more clarity.