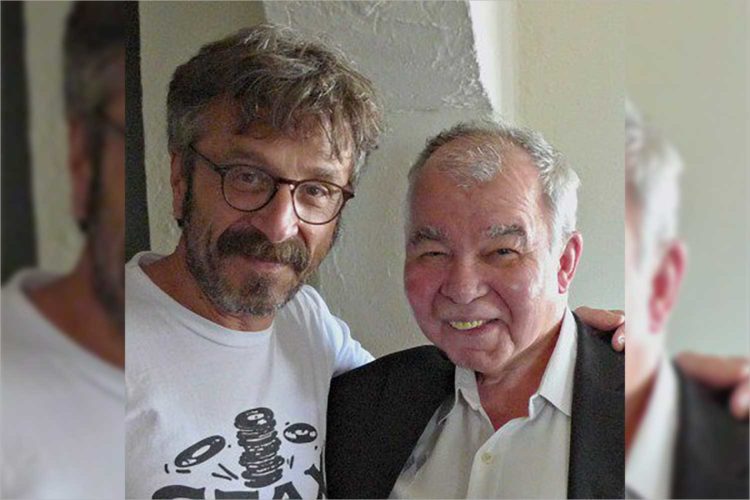 This Saturday, two American masters will appear in Madison. Within feet of each other.

Celebrated singer and songwriter John Prine will perform at Overture Hall. Across the street at Comedy on State, stand-up vet and Michael Jordan of podcasting Marc Maron will finish a three-night run. But this won’t be the first time their paths have crossed.

Back in 2016, Maron interviewed Prine for his long-running podcast WTF with Marc Maron. Anyone who’s listened to WTF knows that the ever-prickly and always empathetic Maron is a highly skilled interviewer and a huge music geek. So while a lot of his interviews with comedians come off as somewhat adversarial, his work with musicians tends to take on a more curious, reverent tone.

Maron tells Prine about being brought to tears by his music. He singles out the song “Sam Stone,” a Vietnam-era rumination that Maron describes as a “window into a sort of American heartache that never goes away.” Like so many Prine songs, “Sam Stone” tackles complex subject matter with a conversational, plainspoken delivery. It’s slyly intelligent, dressed up in Prine’s “aw shucks” cadence.

Or as Maron said: “There’s a simplicity to it, but the turns of phrase are so fucking good.”

They don’t make ’em like John Prine anymore. Spectacular at the Greek tonight!

Like Tom Petty or Bruce Springsteen, Prine is an artist who is quintessentially American. His ability to connect with the average listener is unparalleled. And he’s truly funny without ever dipping into mean-spiritedness. But beyond that, he’s the embodiment of some forgotten dream, a former mail carrier who wrote many of his most well-known songs while on his route.

“It was like being in a library with no books,” Prine joked to Maron about his old job. “You’d spend six hours walking around, and it wasn’t like the movies where people go ‘Hello, Mr. Mailman! How are you today?’ I did that for three years and no one ever talked to me.”

This solitude allowed Prine a lot of time with his own thoughts. And from that came songs like “Hello in There” (a gutting portrayal of aging) and “Sam Stone.” It adds to Prine’s mythos — he’s always been a regular dude who seemed to have happened into cult stardom. And he hasn’t forgotten that, either.

“I thought it was a hobby for me. I didn’t think this was something you could make a living out of it.”

Sometimes you just have listen to John Prine. #AngelFromMontgomery

Prine expected early in his career to be booed off stage or have things thrown at him, he told Maron. Since he never fit the bill of a traditional star, Prine was always waiting for the audience to turn on him. But that never came, and now he is one of the most revered songwriters on the planet.

For John Prine, success didn’t come overnight. This is true of Marc Maron, too. To paraphrase one of Prine’s song, they’ve achieved success in spite of themselves. And hearing these two kindred spirits talk is like a master class in humility.