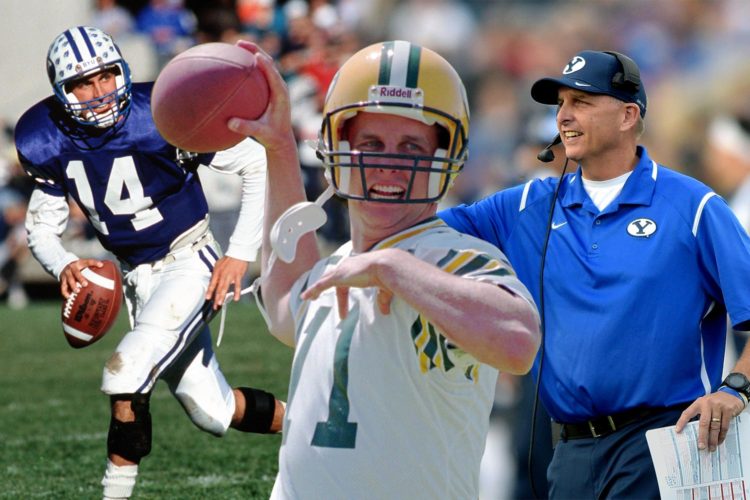 The Wisconsin Badgers will take on their second Utah-based opponent in three weeks, the Brigham Young University Cougars, on Saturday afternoon. But unlike the Utah State Aggies, BYU has a football program that’s pretty well known. Alums include current Kansas City Chiefs head coach Andy Reid and Hall of Fame quarterback Steve Young, and also Jeopardy’s Ken Jennings and that guy from The Benchwarmers who looks like Napoleon Dynamite. So even though BYU is off to a meh 1-2 start to this season, they do have the potential (at least historically) to pull off an upset.

The game is being played in Provo, Utah, so it’s fairly unlikely that you will run into any Cougars here in the wilds of Wisconsin. But should you see one, or if you’re in Provo right now, here are a few things you can say to break the ice.

The Mormon Church owns the school

Utah has a huge Mormon population. Around 62% of Utahans are members of the Church of Jesus Christ Latter-day Saints, and the religion’s headquarters is located in Salt Lake City. So perhaps it’s unsurprising that the church owns the state’s largest university, and it employs an “honor code” that prohibits students from extramarital sex and alcohol consumption, per Mormonism’s conservative values.

The Cougars’ lone Heisman winner is a former Packer

Currently BYU’s offensive coordinator and quarterbacks coach, Ty Detmer was a college football star. Not only did he win the Heisman Trophy in 1990 (to date the only Cougar to do so) but he was also a two-time consensus All-American and College Football Hall of Famer who then enjoyed a 13-year career in the NFL, mostly as a backup.

One of those reserve jobs was his very first. A ninth-round draft pick of the Green Bay Packers in 1992, Detmer spent four seasons as understudy to the man the myth the legend Brett Favre.

Detmer was a major player in one of the great Favre anecdotes of all-time. The superstar quarterback asked Detmer to explain to him the common “nickel” defensive package, which Favre had no clue about even though he was already a multi-year starter in the NFL by that pont. (For the record, it’s when a linebacker is replaced by an extra defensive back.)

“It was the first time I’d been around anybody that just kind of winged it,” Detmer said. “He was a genuine guy that loved playing the game, but didn’t really put a ton of time into it.”

They say the heart of rock ‘n’ roll is in Provo

Given BYU’s honor code and the generally conservative vibe of Provo, you might assume that the culture of the town is lacking. But Provo actually has a pretty vibrant music scene, spawning a few well-known bands in the last decade.

Warped Tour vets will recognize The Used, the chaotic emo punk act that enjoyed a minor hit in the early 2000s with “The Taste of Ink.” But lately, the scene has taken on a much poppier tone — danceable, criminally catchy bands like Neon Trees and the Grammy-winning Imagine Dragons have also called Provo home. And I’m deeply sorry that you’re now going to have “Radioactive” stuck in your head all day.