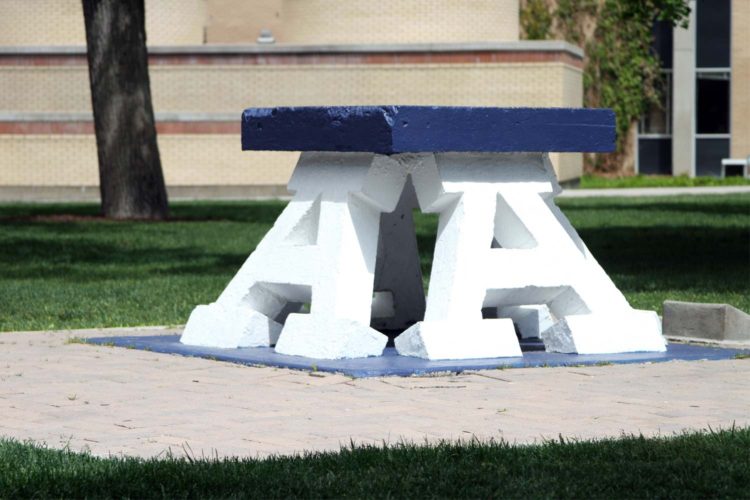 Another season of Wisconsin Badgers football is upon us. Bucky’s Boiz are set to start the 2017 campaign tonight against the Utah State Aggies. It’s an 8 p.m. kickoff, airing nationally on ESPN. Wisconsin is a 27-point favorite.

If you see any navy blue-clad (correction: “Aggie Blue”) fans at your tailgate tonight, they’re probably visiting from Logan, Utah and using this game and the long weekend as excuses to visit our fair city. You may be forced to answer questions such as “Are there any restaurants around here?” and “Why are there so many one-way streets in Madison?”

But what else should you talk about? Here are a few quick ideas.

Your conversations with visiting Aggies fans should begin (and probably end; you won’t be talking to them for that long) with our shared history of Gary Andersen betrayal.

Utah State had only one bowl victory in school history — the 1993 Las Vegas Bowl, which was their first bowl appearance since 1961 — when Andersen was hired there in December 2008. But by his fourth season, he had turned things around. The Aggies went 11-2 in 2012, including a Famous Idaho Potato Bowl victory.

The first of those two losses came in Madison. The No. 22-ranked Badgers squeaked out a 16-14 win over the underdog Aggies in a game that proved to be a turning point for both programs.

Andersen’s success led to a contract extension in October 2012, “ensuring his stay at Utah State through the 2018 season,” wrote The Utah Statesman. Andersen reiterated his commitment to the Aggies at a Nov. 30 press conference.

He left for Wisconsin less than three weeks later.

Fast forward another two-plus seasons and Andersen has an ugly 6-19 record at Oregon State, including a 58-27 shellacking of a loss last week to Colorado State to begin his third campaign in Corvallis. #karma?

If you need more talking points tonight, how about discussing Utah State’s nickname?

It’s the agriculture part that spawned “Aggies,” as it’s short for Agriculturalists, which is a mouthful to spell. Before that they were sometimes called the “Farmers,” which is easy to say, spell and type.

The first season in school history was 1892. The term “season” is used loosely here because it was only one game, a 12-0 victory against the University of Utah. The Agriculturalists had no coach. Maybe a time-traveling Gary Andersen had unexpectedly left?

The second season wasn’t until 1896, also only one game (a loss) but with a coach: somebody named “Professor Mayo,” who was one-and-done. Time-traveling Gary Andersen in disguise?

Basically, Dick Cheney is to the University of Wisconsin what Nolan Bushnell is to Utah State University. Though Bushnell didn’t actually graduate — not unlike how Cheney didn’t finish his doctoral studies at UW — he did attend USU for a period of time. What else did Bushnell do? He co-founded Atari, Inc. and solely founded Chuck E. Cheese’s. Not bad.