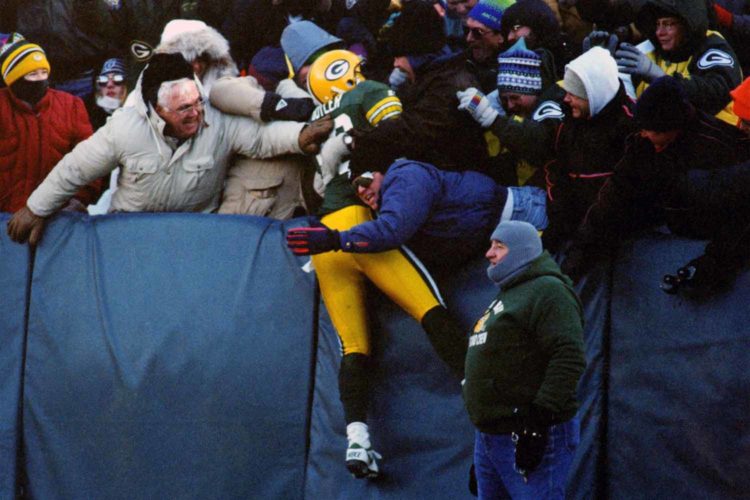 This Leap Day, it’s only fitting that the Wisconsin State Assembly will honor the inventor of the Green Bay Packers’ iconic touchdown celebration.

Saturday, Feb. 29 will be “LeRoy’s Leap Day,” a nod to LeRoy Butler, the former Packers safety and recent Pro Hall of Fame snub. The four-time Pro Bowler played his entire career with Green Bay and is immortalized in team lore as the inventor of the Lambeau Leap, which we all know is the greatest tradition in all sports. (Don’t @ me.)

Great to see @leap36 at the Capitol today! Grateful for all the work he is doing to combat homelessness and I’m glad I have a spare cheesehead lying around in my office! 🧀🏈💪🏾 pic.twitter.com/k8QENldUvd

Butler also does charity work for the homeless with Hebron Housing Service, and he’ll be hosting a special Leap Day benefit auction in Milwaukee. If you’ve got a spare $100, you can meet the man himself and maybe get an autograph. And that’s all well and good, but we’re here to talk about the Leap.

On Dec. 26, 1993, the Packers defeated a lackluster Los Angeles Raiders team, 28-0. The shutout win clinched Green Bay’s first playoff berth in 11 years — argably 21 but that’s not what made the game so memorable. The true highlight began with a fourth-quarter fumble forced by Butler and recovered by Reggie White. The ball was lateraled back to Butler, who returned it for a touchdown. The Packers were already ahead and the energy inside Lambeau Field was high. That’s when No. 36 decided what needed to be done.

“I know a lot of people say, ‘Well, act like you’ve been there before,’” Butler told ESPN in 2015. “I’m a defensive guy. I may not ever get back there again. So I was going to make the most of it.”

With that, Butler vaulted into the bleachers and a beloved tradition was born. And though he is undoubtedly the father of the Lambeau Leap, Butler isn’t the only name in the story. Wide receiver Robert Brooks is credited with popularizing the celebration, being that he played offense and found his way to the end zone a lot more often than Butler did. Also, he made an exceptionally ’90s rap song about it. “Stuck to the wall like Velcro,” indeed.

Leaping through the years

Countless Packers have launched themselves into the stands throughout the years. In fact, that’s part of what makes it so great: it involves fans in the celebration. (“You might take a Miller Lite bath,” Antonio Freeman once told a young Ahman Green.)

In 2016, beloved grinder Jeff Janis had some tips on how to Leap properly. “It’s like you’re going in for a dunk,” he told Sports Illustrated. “You run toward the wall, and as soon as you think you’re close enough, you gather yourself, turn sideways a little bit and jump and spin in the air. Let your legs hit, sit down and then all the fans grab you.” This should be curriculum for all Wisconsin phys-ed classes.

FWIW, the father of the Leap himself thinks Donald Driver is the best Lambeau Leaper of all time. “He has like a 40-inch vertical leap,” Butler said. “He’ll jump up there and actually sit on the wall.”

There have been imitators over the years, of course. Usually these are trash-talk moves by opposing players. For example, last year the Eagles’ Dallas Goedert tried to bite our style in our own house — not cool, man! It’s not like we’re coming to Philly and pelting Santa Claus with snowballs. We know that’s your thing and we respect boundaries.

But perhaps the most egregious fake comes from the new incarnation of the XFL, where the Houston Roughnecks are apparently trying to make the “Houston Hop” a thing. Current Packers star Davante Adams had a perfect response: