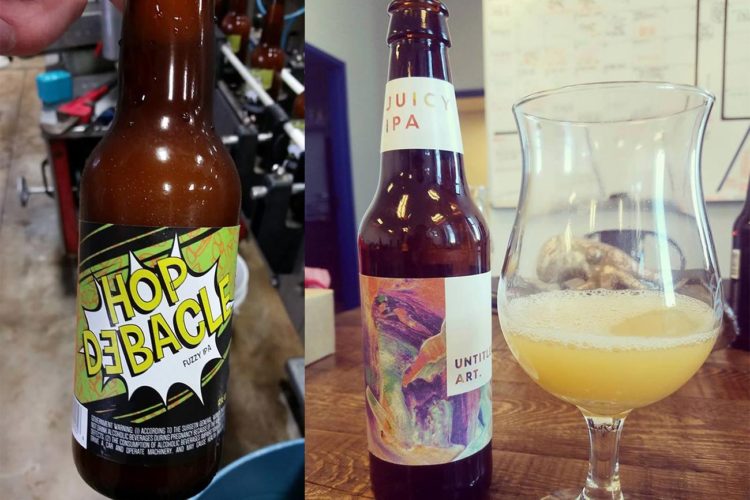 Welcome to “Last Week in Beer,” a recurring column about the latest happenings in the world of beer.

It appears that the trend perfected in the Northeast states, commonly referred to as a “New England-style” IPA or pale ale, has hit Wisconsin. Known for its intentionally hazy, opaque appearance, the beer often resembles a glass of orange juice. It packs a huge citrusy hop aroma and very little to no bittering hops, which often earns it the descriptors “juicy” and “fuzzy.” Trillium and Tree House out of Massachusetts and The Alchemist and Hill Farmstead out of Vermont are probably the most well-known producers of the style, but none of them currently distribute out of state.

Several Wisconsin breweries have seized this market opportunity and attempted to brew their own New England IPA. Untitled Art, a side project collaboration between Levi Funk of Funk Factory and Isaac Showaki of Octopi, was the first prominent offering available in the Madison area with Juicy IPA, followed soon after by O’So’s Hop Debacle. Of the two, my preference was for Hop Debacle, as O’so was able to achieve a nice soft mouthfeel to accompany a citrus-bomb hop aroma and taste that was, dare I say, juicy. Both breweries continue to tweak their recipes based on feedback from these initial brews.

Pearl Street Brewery out of La Crosse put Untitled Art and O’so to task with their Rumpshaker IPA, which was surprising given their often uninspired offerings. My experience with the style has been limited to the occasional cans that a Boston-area friend sends me, but this one checks all my boxes for the style. It pours a cloudy off-orange that resembles an orange milkshake, which had me worried it would be a mouth full of yeast. Any concerns were quickly alleviated by a rush of grapefruit citrus and a smooth, creamy finish with just a hint of bitterness.

As reported earlier this month, Solemn Oath entered the Wisconsin market in mid-May. Among their launch events was a tap takeover at Dexter’s Pub, which showcased six of the Chicago area brewery’s offerings. We Fear Change, a Belgian style IPA, was my favorite of the bunch. It offered a complex flavor profile with honey sweetness to showcase its citrusy hops. In cans, seek out their Snagletooth Bandana, a classic IPA example that balances aroma hops against a medium body with a bitter punch. They weren’t all hits, however, as Old Faithorn, an APA, gave off grassy and earthy hop flavors with an insufficient malt character to balance.

Madison also saw Toppling Goliath hit with a new beer in their X-Hops series, X-Hops Teal. An American pale ale, this one is pretty close to the New England-style APA, but with more bitterness. The beer poured a hazy orange and provided a juicy hop presence with a touch of complementary pine resin on the finish. X-Hops is TG’s experimental line of pale ales, so this is likely a recipe that is still in development. A very promising start that I thoroughly enjoyed.

Octopi Brewing’s house brand, 3rd Sign Brewery, is no more. Faced with the sale of its distributor, River City, to Wisconsin Distributors, Octopi feared it would get less attention from the new distributor. Wisconsin Distributors is significantly larger than River City and has a deeper portfolio. Rather than wait out a bad contract or be forced into a dispute to try to get out of it, 3rd Sign instead decided to fold the brand entirely.

For now, the focus will be on expanding taproom offerings and the recent approval to host a food truck at the brewery. I wouldn’t expect this phoenix to be buried in the ashes for too long though, as Octopi will have the benefit of a clean slate and experience to establish a new in-house brand. Personally, I’m hoping they use the time to tune-up their recipes and process, as 3rd Sign did little to stand out in the increasingly crowded Dane County brewery field.

Could this be an admission from TG that the FL cans are not up to the standard?

Be patient. They will be. https://t.co/zEZwNqO9wa

Beer is getting very entertaining and very insane. pic.twitter.com/QoNCqOgAxg

TG gets its distributor:

We are very excited to welcome @TheTGBNews to our family of brands!! pic.twitter.com/Av4Sv2cVMT

Apparently the Swiss are not staying neutral in their feelings re: big beer acquisitions:

While we wait for the completed construction of the Olbrich Beer Garden, road trip!