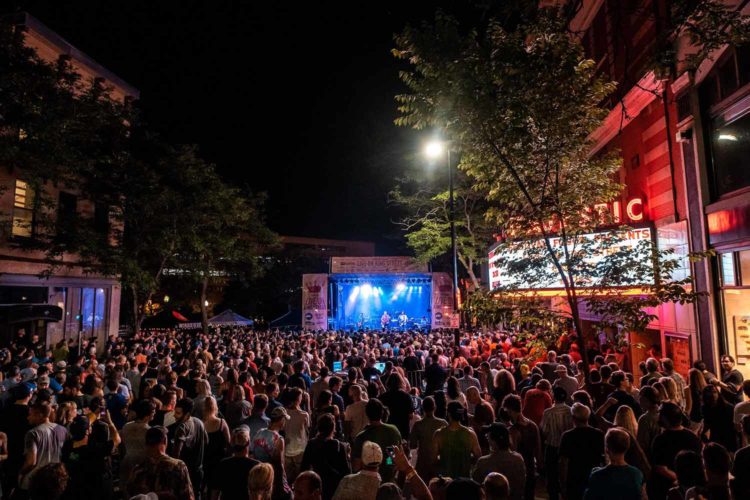 It may have snowed less than a month ago, but summer is finally coming. That means plenty of excuses to drag yourself outside. One example: free music.

The lineup for this year’s Live on King Street was released this morning. The annual free concert series outside the Majestic Theatre will feature more than a dozen artists, ranging from legendary indie rockers to a funk band that dresses up like dead guys.

Here’s a look at this year’s headliners:

Friday, June 14, with Bones Owens and The Kelsey Miles Band

Whiskey Myers takes the soulful roots of southern rock and hardens its edge. The Texas sextet writes monster riffs that slither through their songs, complementing singer Cody Cannon’s emotive vocals. Like former Black Crowes leader Chris Robinson, Cannon can seamlessly shift between a croon and a howl, allowing his voice to hit hard on ballads and bangers alike. And after multiple appearances in Kevin Costner’s TV series Yellowstone, Whiskey Myers seems to be on the cusp of a big break similar to that of fellow country-fried rockers Blackberry Smoke.

When I first read that Built to Spill was going to play LOKS, I nearly did an actual spit take. I love this band. Since the early 1990s, Idaho’s prodigal sons (well, son — singer and guitarist Doug Martsch is the only original member left) helped to rewrite indie rock’s playbook with their drifting guitar hooks and vague, introspective lyrics. Even at its darkest, Built to Spill’s music is comforting, like an endlessly understanding drinking buddy for Gen-X rock fans. Their most recent release was the excellent Untethered Moon in 2015.

Like GWAR, The Aquabats, or our very own Masked Intruder, Here Come the Mummies is a band incognito. The Nashville-based funk rock outfit has an ever-changing lineup, with the only connective being that its members all dress up as mummies onstage. No one knows any of the players’ identities — likely because many of them are under contract to other record labels — but that hasn’t stopped Here Come the Mummies from releasing nine original albums of spooky funk.

Friday, August 2, with Armchair Boogie and Them Coulee Boys

Despite having “south” in their name, The Dead South actually hails from up north (Regina, Saskatchewan, to be exact). But their sound — a mixture of folk and bluegrass — is decidedly southern. And it’s won them tons of acclaim; their 2018 album Illusion and Doubt won a Juno Award (Canada’s version of the Grammys) for Best Traditional Roots album. It’s the type of music you’d expect to hear on a back porch in Kentucky rather than in the midst of Canada’s oil fields.

Rod Tuffcurls & the Bench Press plays Madison enough that at this point they might as well be honorary Madisonians. The Chicago cover band generally puts on a raucous live show where beer flows freely and singalongs aren’t so much encouraged as they are mandatory. The band has no genre restrictions and are pretty quick to pick up new songs. From classic rock radio staples to chart-topping hits, Rod Tuffcurls & the Bench Press play it all.

Any predictions? Leave them in the comments.

Update, May 13:
Prof has been announced as the Sept. 13 headliner, with openers TBA. Oftentimes rap music can drift towards gloomy self-seriousness, so a rapper like Prof is a breath of fresh air. The irreverent emcee (born Jacob Anderson) is prone to lyrical flights of fancy and works his crowds like a stand-up comic. Early in his career, he would frequently perform shows that wouldn’t officially start until his hype man got so drunk on free shots that he puked. In 2018, Prof had planned an ice skating event at Tenney Park until the city iced him. His fourth LP and second for iconic Minnesota rap label Rhymesayers, Pookie Baby, was released last year.