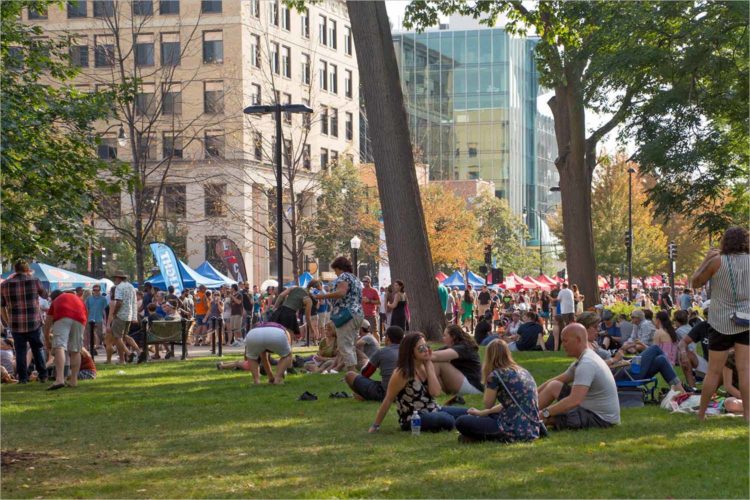 Based on a Nicholas Sparks novel, The Notebook may be the date movie of the 2000s. It’s the story of two star-crossed lovers that effectively launched the careers of A-list stars Rachel McAdams and Ryan Gosling. Will their forbidden love survive when Baby Goose goes off to fight in World War II? More importantly, will his cheekbones?

If you’re anything like me, fantasy football drafts fill you with anxiety. You either under- or over-prepare, and you always end up accidentally picking a guy who’s out until at least Week 5. Make this year different: Hold your league’s draft in person with RotoWire’s expert advice on hand. And even if you’re not drafting today, now’s the time to get any lingering questions answered: fantasy gurus Jake Letarski and John McKechnie will lead a free panel and Q&A.

Listening to Phantogram is like floating in space. The duo of Sarah Barthel and Josh Carter makes electro-tinged dance rock that fans of both CHVRCHES and The Cure would love. It’s dark, dreamy, psychedelic stuff; new single “Into Happiness” sounds like it was made for a zero gravity rave. Supporting them will be Bob Moses, a Canadian duo — yes, duo — that specializes in sophisticated electronic music.

Before Conor Oberst first warbled into his tape machine, Simon Joyner was the king of Omaha’s indie rock scene. He’s a prolific artist who careens between lo-fi intimacy and full band rock and roll. With his band the Ghosts, Joyner draws out his sound with keyboards and steel guitar, at once reserved and ready to burst. He released a collection of covers and rarities in June, and his support here is birthday boy TS Foss, aka Tyler Fassnacht of Proud Parents, Fire Heads and The Hussy.

Nick Coleman, aka rapper Bravo, began experimenting with hip-hop during his freshman year at UW-Madison. A couple of years and a lot of tinkering later, he released his 2018 debut, Bravo Blvd., a remarkably assured first EP. Bravo raps with an easy confidence that recalls Acid Rap-era Chance the Rapper, right down to the cinematic beats. And as a bonushere, Kainalu will open things up. Taking influence from bandleader Trent Prall’s Hawaiian heritage, their music hangs in the air like a warm seabreeze.

Don’t forget: Stanley will be there.

Woodrow came a long way from their inaugural My Chemical Romance cover. But the Madison band hit the ground running, gaining a devoted following and releasing their debut full-length earlier this year. But band founder Connor Falcon Brennan is now moving to Nashville, marking the end of Woodrow. This will be the band’s last show in Madison, with their final gig scheduled for Wise Fest at the Walworth County Fairgrounds on Sept. 14.

What began as a Kickstarter campaign five years ago is now one of the most acclaimed films of 2019. Give Me Liberty is a semi-autobiographical film by Kiril Mikhanovsky, who immigrated from Russia to Milwaukee in the early ’90s. The film, shot entirely in the MKE area, tells the story of a minibus driver whose spontaneous route serves to explore the city’s social frustrations to comic effect.

Nahko and Medicine for the People

Oregon native Nahko Bear (yes, that’s his real name) seeks to bridge cultural gaps with his music. Case in point, Nahko releases his world music on a punk rock label (SideOneDummy), and his ethos echo that scene’s DIY values and clear-eyed empathy. And though most of Nahko and Medicine for the People tends to be on the quieter acoustic side, he’s not afraid of cranking the amps up occasionally. Support will come from Australian-Jamaican roots musician Nattali Rize.

Funky hip-hop group Bird’s Eye is one of Madison’s most engaging live bands. Between the group’s airtight-but-freewheeling instrumentation and Ra Fury’s blistering rhymes, the septet is unmatched musically. Bird’s Eye’s high energy rap and roll will fit perfectly in that hole in your heart left by dearly departed Chicago wunderkinds Kids These Days.

Though Julian Lynch has a pretty sweet day job — playing guitar in the band Real Estate — the Madisonian’s musical side hustle is nothing to scoff at. Lynch is something of a mad scientist, creating cascading, experimental soundscapes marked by chilled-out and ambience and occasional moments of shred. I highly recommend checking out his excellent recent album, Rat’s Spit. Lynch will perform here as support for Detroit pop rockers Deadbeat Beat and former Midnight Reruns frontman Graham Hunt.

When Prince died in 2016, the world became a lot less funky. Thankfully, Madison tribute act Purple Veins — formed in 2011 — are carrying the torch. Their live shows are notorious for packing in as much showmanship as the Purple One himself, complete with choreographed dances and theatrics. Let’s get nuts.

No director has done a better job putting punk on film than Penelope Spheeris. The Decline of Western Civilization is essential viewing, but Suburbia may be an even greater accomplishment. Starring all non-professional actors (including Red Hot Chili Pepper Flea), the 1984 film is an affecting portrait of a group of suburban punk runaways. Look for cameos by legendary bands D.I., T.S.O.L. and The Vandals.

Are you ready for some football? The Badgers are heading into this season ranked No. 19 and will open the season against USF of the American Athletic Conference. Wisconsin is looking to bounce back after a disappointing 2018; UW began last season ranked fourth, but ended up finishing with a 5-4 record in the Big Ten. And that… smh… included losing Paul Bunyan’s Axe to Minnesota for the first time in 14 years. At the very least, hopefully 2019 doesn’t include another loss to the goddamn Gophers.

Respect: A Celebration of Women in Music

This third annual concert will feature another slate of very talented women paying tribute to other very talented (and slightly more famous) women. This year’s edition will feature performances of artists ranging from Stevie Nicks to Brandi Carlile to the queen mother herself, Beyoncé. And better still, the whole thing benefits Planned Parenthood.

Equal parts heavy and technically mind-blowing, post-hardcore is one of the harder genres of music to pull off. But for Madison’s Hex House, it’s like second nature. The trio uses influences from post-punk and post-rock to create a dark, powerful atmosphere punctuated by thunderclap snares. Hex House will be supporting Kalamazoo’s OUT, who will be there to commemorate the release of their new record Billie. Regal Machines rounds out the bill.

Fans of great local food and post-grunge yarbling rejoice: Taste is back. As per usual, there will be a ton of local restaurants on hand, plus live music from P.O.D., Nonpoint, The Red Jumpsuit Apparatus and more. This year also has the added bonus of Lambeau Field Live, the Green Bay Packers’ experience featuring stadium drummers Tundra Line and an appearance by NFL Hall of Famer Dave Robinson.

The upper Midwest is full of great roots musicians, and this event seeks to bring a whole bunch of them together for a day of great tunes and food provided by regional food trucks. A baker’s dozen artists will be on hand, including Them Coulee Boys, Joseph Huber, The Kelsey Miles Band, Lou Shields and The Handphibians. Plus, it’s a great excuse to enjoy one of Madison’s best patios. And seeing as it’s suddenly Labor Day weekend, this may be one of your last chances to enjoy the perfection of late summer weather.