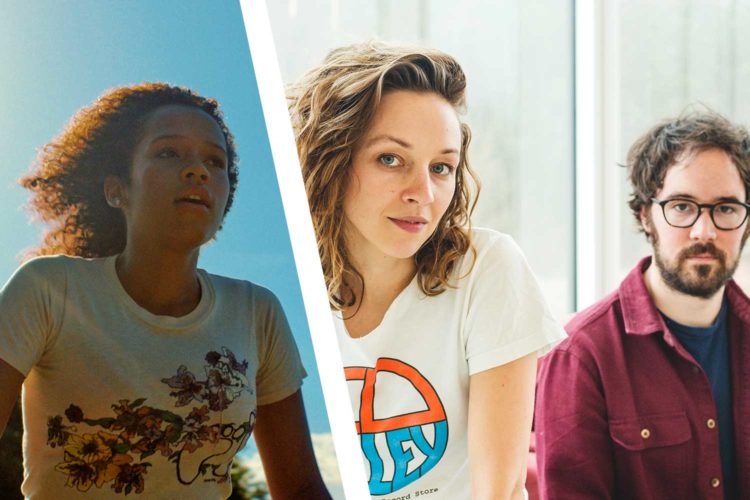 I love the Kill Bill series, but I have a hard time watching the second installment. There’s a scene where my mild claustrophobia is preyed upon, and I generally have to either close my eyes or leave the room. I know, I’m a big baby. But I’ve never let this fear keep me from revisiting the movie in which Uma Thurman’s Bride careens toward the end of her bloody quest for revenge. Does Bill get killed? You’ll have to watch and find out. (Or just Google it; Kill Bill: Vol. 2 was released in 2004 and it’s way past the statute of limitations on spoilers.)

Speaking as a bearded white dude who owns every Father John Misty album on vinyl, folk rock is great — but it’s even greater when harmonies are added. Those layered vocals are what sets groups like The Band, Fleet Foxes and now Bailen apart from the rest of the pack. The trio is comprised of three siblings (including twin brothers) whose songs are so concise it’s as if they were born specifically to create this indie band. And with an added level of polish from super producer John Congleton (St. Vincent, The War on Drugs), Bailen’s debut album Thrilled to Be Here establishes them as an exciting new presence in folk. With support from ex-Oh My Love vocalist Hannah Luree.

By way of being both extremely talented and also hot, Timothée Chalamet is essentially the new Leonardo DiCaprio. In 2018’s Beautiful Boy, Chalamet plays real-life writer Nic Sheff, an overachieving teenager struggling with a debilitating meth addiction. Thankfully, he has a strong support network in his father David (Steve Carell), a New York Times writer on whose memoir the film is based. That said, Beautiful Boy is also based in part on Tweak, Nic’s own autobiography. It’s two adaptations for the price of one! (Which is free, btw.)

Tie one (or two) on early with a happy hour performance by local troubadour Scott “Boo” Mullarky. As the leader of Boo Bradley, Mullarky takes music back to the railyard, employing jug band aesthetics for a ramshackle folk sound. It’s like stepping into a sonic time machine. (Or a Tom Waits song, whichever you prefer.)

Who knew the guy from The Hangover would become one of our most celebrated artists? For the remake of American standard A Star is Born, Bradley Cooper took on the jobs of producer, writer, director and star, plus doing all of his own singing as an alcoholic alt-country dude, Jackson Maine. But the film’s real talent may be in Lady Gaga, who shines as an unheralded young singer whom Maine takes under his grizzled wing. And the soundtrack is choice, featuring original songs by Lukas Nelson, Jason Isbell and The Highwomen’s Natalie Hemby, among others.

It’s tough to classify Mr. Chair. They are jazz, rock and classical, often all in the same passage. But above all else, they’re a band comprised of four of the most virtuosically talented musicians in town. In addition to their own tunes, they specialize in modern arrangements of iconic composers like Bach. They’ll be getting an assist here from trumpeter Dave Cooper and guitarist Chirs Bucheit.

Comedy classic The Princess Bride is one of the most quotable movies ever made, and now you can flex that useless quote knowledge. This Brew ’n View presentation of Rob Reiner’s modern fairy tale encourages audience participation, including the ability to guess the next line in the 1987 film. In addition, there will be themed drinks, handouts (inflatable swords!) and a costume contest. Have fun storming the castle!

Alla Kovgan’s 2019 documentary Cunningham celebrates the life of Merce Cunningham in a way the experimental choreographer probably would have loved: by recreating some of his best work in immersive 3-D. Cunningham pushed the boundaries of dance, experimenting with motion capture technology and collaborating with artists like Andy Warhol and composer John Cage (Cunningham’s long-term partner). Kovgan pulls double-duty, preserving Cunningham’s game-changing work and delivering an ambitious statement of her own.

North Carolina duo Mandolin Orange is one of the hottest names in modern Americana. Emily Frantz and Andrew Marlin craft timeless songs, at once true to the genre’s traditions while still taking undeniable influence from post-modern aesthetics. Mandolin Orange transports the ragged spirit of early American music to the indie rock generation. Tides of a Teardrop, their sixth album, was released last February. With support from fellow North Carolinian folk singer Kate Rhudy.

Is it possible to wear two pairs of earplugs at once? If so, you may want to try for this high-energy metal show. Madison’s Growing is the highlight here, bringing a catchy-yet-technical take on the metalcore genre not unlike international megastars Bring Me the Horizon. Also performing will be the pride of Billion, Wisconsin: progressive deathcore outfit Immortalis. Rounding things out is boozy Milwaukee metal outfit American Bandit.

After impressing local fans with their infectious garage punk, it seems about damn time Golf Dolls released their debut album. And true to form, Die Trying is a kinetic mix of hooks and fractured guitar runs that to this Britpop nerd can — at times — recall the masterful work of Blur’s Graham Coxon. And the support here is impeccable, including local post-hardcore band Hex House (who released their own debut last year) and garage punx Momotaros.

‘Harry Potter and the Prisoner of Azkaban’ in Concert

All the movies in the Harry Potter series are memorable in their own way, but 2004’s The Prisoner of Azkaban stands above as being the absolute weirdest. The third installment served as a turning point for Harry and the gang, seeing the main characters enter their teen years under the lens of — of all people — eclectic Mexican filmmaker Alfonso Cuarón. Some fans don’t like it, but I think it’s perhaps the only time in the entire saga that the filmmakers in charge did something truly unexpected. These screenings will include live accompaniment from the Madison Symphony Orchestra, bringing iconic composer John Williams’ score to life.

No one could touch Kurt Russell in the 1980s. The ex-child star became a genre cinema icon thanks to his work with horror maestro John Carpenter, starring in cult classics like The Thing and Big Trouble in Little China. But his most iconic character may be Snake Plissken, the eyepatch-adorned hero of Carpenter’s Escape from New York. In a futuristic, dystopian Earth, Snake gets dropped into the prison colony to rescue a kidnapped president. Oh, and he only has 22 hours to do it. And the name of that prison colony? New York City, baby!

‘Once Upon a Time… in Hollywood’

Speaking of Kurt Russell, he had the misfortune of starring in The Hateful Eight, which is by far Quentin Tarantino’s worst movie. It sucks ass; there’s no reason to watch it. Thankfully, QT redeemed himself with last year’s Once Upon a Time… in Hollywood, a revisionist take on the Manson murders through the lens of a washed-up actor (Leonardo DiCaprio) and his stuntman best friend (Brad Pitt, in his best role in years). And Russell appears here as well, hopefully washing the taste of his last collaboration with Tarantino out of his mouth. My only real criticism of Once Upon a Time… is its underuse of Margot Robbie, who is effervescent as Sharon Tate.

A24 film Waves has “A24” written all over it. The indie production house has become its own aesthetic at this point, a shorthand for small original films with huge vision. Trey Edward Shults directs Waves, the story of a Floridian family with two kids trying to navigate adolescence as life seems to close in around them. Warm and deeply human, the 2019 film stars Kelvin Harrison, Jr. and Taylor Russell in breakout performances. Lucas Hedges, Sterling K. Brown and Clifton Collins Jr. round out the cast.

To me, “Yam Haus” sounds like somewhere you go in Milwaukee with a weapons-grade hangover. On the contrary, the real Yam Haus is a pop quartet from the Twin Cities in the vein of electro-tinged hand-clappers Walk the Moon. And they’re also catchy, sure to occupy the back of your mind indefinitely. Their support here features two great Madison-area indie poppers: Seasaw and up-and-coming trio Kat & The Hurricane.

If the Mark Wahlberg classic Rock Star holds any water, there is serious talent to be found in tribute bands. Take, for example, The Pork Tornadoes. The Iowa-based band is fronted by Mason Greve, who was a competitor on NBC’s The Voice in 2014. From Third Eye Blind to Hozier to Kings of Leon, Greve and his bandmates play pitch perfect tribute to the indie pop stars of today. Think Rod Tuffcurls raised on the Garden State soundtrack.

Gaelynn Lea has defied the odds. That’s true of anyone who’s able to make a living as a professional musician, but especially so for Lea. The indie folk violinist has a condition called osteogenesis imperfecta, or “brittle bones disease,” but it hasn’t stopped her in the two decades she’s been touring around the country. And in 2016, Lea won NPR’s Tiny Desk Contest, putting her in front of a much larger audience than ever before. Her third album, Learning How to Stay, was released in 2017.

Unfortunately for the Green Bay Packers, winning ugly also means losing ugly. That means the San Francisco 49ers will take on the Kansas City Chiefs in Miami. Personally, I will be rooting for KC, because I love Patrick Mahomes’ Kermit the Frog voice and rocket launcher of a right arm. Also, he seems like a fun guy. Just saying. But even if you don’t care about the football aspect, you can always watch it just for the commercials. Apparently Mr. Peanut is going to get murdered!