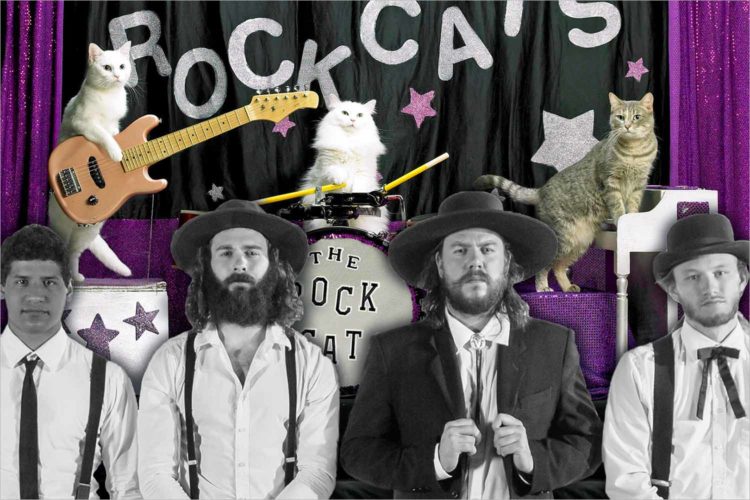 Harken back to a time when Lindsay Lohan was America’s sweetheart with this screening of her best performance. Written by Tina Fey, 2004’s Mean Girls follows Lohan’s Cady Heron as she adjusts to an American high school after spending her childhood in Africa with her scientist parents. It’s an endlessly quotable comedy classic that helped launch the careers of stars Lohan, Fey, Rachel McAdams, Amanda Seyfried and Lizzy Caplan.

Dale Watson is about as far from country radio as you can get. Perfectly coiffed and heavily inked, he plays his own sub-genre of music called “Ameripolitan.” It’s a collection of country’s roots, from western swing to outlaw, with none of the watered-down suburbanisms of today’s mainstream stars. And that pandering doofus Blake Shelton hates it, so you know it must be good.

It’s been quite a summer for local queer punk duo Gender Confetti. They released a total ripper of an album (We’re Gay) and will now hit the road with Gully Boys, a beachy emo trio from Minnesota. This show serves as their tour kickoff, but that’s not the only reason it’s notable. It’s also the final gig for Miyha, the indie punk quartet whose swang song World’s Biggest Crush came out earlier this year.

Concerts on the Square: Rockin’ Rachmaninov

This year’s CotS series comes to a close with the help of Russian pianist Ilya Yakushev. The WCO and Yakushev will put together a “full symphonic program” of Rachmaninov, Mozart and Stravinsky. These are the real heavy hitters of the classical music world. It’s like Ozzfest, but with violins. That’s what makes it Rockin’.

Thames call themselves “the best boy band since Brockhampton.” That’s a grand statement, but it’s not far from the truth. The St. Louis quintet combines elements of The 1975’s cultural malaise with Frank Ocean’s soulful vocals, making for some seriously heady pop music. This is probably what Radiohead would sound like had they formed in the Tumblr era. Support comes from a pair of Madison acts: hip-hop/rock hybrid The Grease Monkeys and troubadour Old Wolves.

FINKEL is a new old band. The electro-pop duo was formerly an acoustic indie band known as Less is More. But last year they shed those constraints in favor of a more freewheeling, avant garde electro-pop. With the change came a new name, and I can’t begin to guess how vocalist Jane Finkel came out with it. But fear not: Finkel and her husband/bandmate Brian Spencer are still as dynamic live as they ever were. The Band Formerly Known as Less is More will be joined by bluesy Milwaukean Cullah and Oshkosh blue-eyed soul outfit Horace Greene.

This show is billed as “versus” but don’t expect to see any steel chairs or elbow drops. It’s more of a tag team event. In town from Seattle is Scott Yoder, a folk-glam wild card with a bombastic live show at odds with his intimate songcraft. And playing their first Madison date in a while is Solid Freex, a grungy punk act that never fails to whip the audience into a frenzy.

Inspired by touchstone songwriters like John Prine and Townes Van Zandt, Buffalo Gospel is a band with an old soul. Their throwback country is concise and evocative, able to say a whole lot without saying much at all. Maybe singer and songwriter Ryan Necci was born in the wrong era. But at least we get to reap the benefits. Buffalo Gospel will also perform Friday at the two-day Sugar Maple Music Festival (Aug. 2-3) at Lake Farm County Park.

Ride into Valhalla (shiny and chrome) with the most recent addition to the Mad Max saga. In this 2015 installment, Tom Hardy assumes the role of Max Rockatansky and finds himself helping liberate a group of sex slaves from post-apocalyptic warlord. It’s a masterpiece of action filmmaking, in addition to being one of the most re-watchable films of the past 10 years. And each time, the thrill is the same: you live. You die. You live again.

Tourette syndrome is not inherently funny. (What medical condition is?) That is, unless you’re TS-afflicted comic Samuel J. Comroe — then it’s hilarious. The Californian draws from his experiences in his routine, working double-time to both humanize it and point out its absurdity. He’s appeared on Conan and won Ricky Gervais’ Comedy Competition in 2012. More recently, Comroe appeared on Kevin Hart’s Real Husbands of Hollywood. That’s a lot of funny people who agree on him, just sayin’…

Despite having “south” in their name, The Dead South actually hails from up north (Regina, Saskatchewan, to be exact). But their sound — a mixture of folk and bluegrass — is decidedly southern. And it’s won them tons of acclaim; their 2018 album Illusion and Doubt won a Juno Award (Canada’s version of the Grammys) for Best Traditional Roots album. It’s the type of music you’d expect to hear on a back porch in Kentucky rather than in the midst of Canada’s oil fields. With the funky jams of Madison’s Armchair Boogie and Eau Claire’s bluegrass brothers Them Coulee Boys.

Though originally from Fond du Lac, Madison’s Bashford sounds more like the came from early ’90s Seattle. The grungy trio has huge hooks to go with their stomping brand of rock and roll. It’s loud, angsty and definitely worth the trip. Especially given the rest of the bill. Milwaukee’s arena rockers Heavy Hand will be there, plus a pair of locals: stoner rock duo-turned-trio The Heavy Parts and college rock revivalists Small Mediums.

With the rise in music festivals, the jam and indie communities have seen a great deal of overlap. That fellowship is cemented here, as members of Madison’s jam scene come together to interpret some of their favorite indie rock songs. Members of The North Code, Sweet Delta Dawn, Better Yeti, Fringe Character and more will honor a host of artists, from Radiohead to the pride of Baraboo, PHOX.

Cats make everything better, whether it’s coming home after a long day of work or interspecies rock ‘n’ roll. The Amazing Acro-Cats focuses more on the latter, with a main attraction that includes Tuna and the Rock Cats, an all-cat band that has a chicken playing the tambourine. Yes, a chicken. The show also features the cats doing non-cat activities like skateboarding and hoop-jumping, but come on… Tuna and the Rock Cats.

There is no condiment more deserving of its own holiday than mustard. And National Mustard Day pulls out all the stops for it: food and free mustard samplings abound in celebration of the yellow stuff. Plus, enjoy music from long-running Madison pop rock band Chaser and meet Brewers legend-turned-BBQ sauce maker (Stormin’) Gorman Thomas.

If you couldn’t manage to get tickets to Lizzo’s sold out show this fall at The Sylvee, fear not. Glitzo will take the singer’s hyper-catchy self-love and deliver it with some of the Midwest’s drag all-stars. Windy Breeze, Mi Mi Sanchez, Anya Knees, Karizma Mirage and Bianca Lynn Breeze will all appear, with DJ Femme Noir on jam-supplying duty. Better brush up on your flute playing and/or twerking skills.

For people of a certain age (read: us damned millennials), Tony Hawk is a cultural icon. I remember watching him land the first 900 at the ’99 X Games, and his Tony Hawk’s Pro Skater video game series helped spawn my interest not just in the sport but in punk rock as well. Hawk’s influence will be celebrated here by some of Wisconsin’s finest punk bands, headlined by Milwaukee’s Direct Hit! Also slated to drop in (like on a halfpipe, lol) are Why Not, Coasting, Nectar, Delinquents, Middle Aged Overdose, Mud Dog, Schmoolio and Dear. Mr Watterson. And if one of those nine bands doesn’t cover “Superman,” that is one huge missed opportunity.

By now, we all know the plot of 1993’s Jurassic Park: man creates dinosaurs, dinosaurs try and destroy man (woman inherits the Earth). So instead of rehashing the plot of Steven Spielberg’s all-time classic, let me implore you to follow the film’s star Sam Neill on social media. The 71-year-old actor — who plays cranky paleontologist Dr. Alan Grant — mostly spends his days on his vineyard in New Zealand, hanging out with his ducks and generally being an all-around joy. We must protect him at all costs.

Two of the funniest guys in Madison — hosts Charlie Kojis and Adam McShane — invite you to drink beer and laugh at this outdoor comedy showcase. The headliner is Denver-based comic Sam Tallent, who was recently named one of Just for Laughs’ “New Faces” for 2019. Also performing are local stand-ups Nina Davis and Cosmo Nomikos.