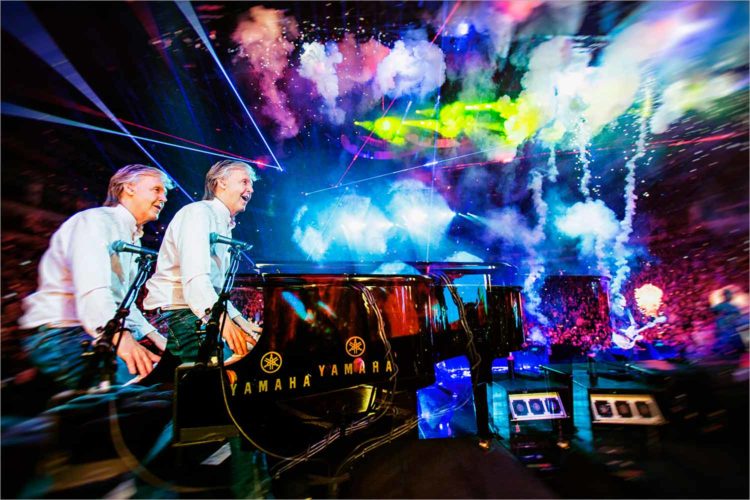 Few metal bands are as revered as Sleep. The California trio has been called the “ultimate stoner rock band,” largely due to their complete mastery of lurching, sludgy riffs. Sleep songs sound physically heavy; listen to their blistering classic Dopesmoker for further proof. Or if you want something a little newer, Sleep last year released The Sciences, their first album since Dopesmoker in 2003. With Big Business, a Seattle duo who were at the top of their class at The Melvins School of Music.

If you’re grading films based on their rewatch value, it doesn’t get much better than The Sandlot. Released 26 years ago, the ultimate summer story of baseball, friendship and big scary dogs still holds up today. (Its sequels… not so much.) Whether this is your 100th time seeing it or your first, The Sandlot is a modern classic. The film spells it out, too; heroes get remembered, but legends never die.

Love ’em or hate ’em, Greta Van Fleet is one of the most popular rock bands in the world. Their debut album, Anthem of the Peaceful Army, positioned them as the Gen Z answer to Led Zeppelin. Sure, they might just be repackaging Zep’s screeching hard blues for the streaming era, but there isn’t another band at their level who sounds quite like they do. Besides, if Greta Van Fleet inspires even one kid to pick up a copy of Houses of the Holy and get the Led out, I’m all for it. Ida Mae will also appear; like Greta Van Fleet, they are a band (the duo of Chris Turpin and Stephanie Jean) with one person’s name.

Grindcore is one of metal’s most extreme offshoots. New Jersey’s Durian plays it to the bone, with their sound resembling the howling maw of a black hole rather than anything melodic. But in grindcore, that makes them kings. Visiting from Stoughton (because you know Stoughton throws down) is grind act Mellow Harsher, plus Madison extreme metal outfit Warbastard.

Few musicians complement each other as well as Ratboys’ Julia Steiner and Dave Sagan. The Chicago band plays emo gone country, with Steiner’s confessional lyrics paired to Sagan’s guitar twang. I’d coin it “yeemo” if Our Queen Kacey Musgraves didn’t already lay claim to that one. Also, they wrote a song about a dead cat that destroys me every time I hear it. Opening is Disq, a Madison favorite who recently released a 7-inch single for the iconic Omaha label Saddle Creek Records.

Obviously, the biggest selling point for Macca is the fact that he was in the FUCKIN’ BEATLES. But personally — and I will die on this hill — I’ve always been more of a fan of his work with Wings. I love Wings. To quote Alan Partridge: “They’re only the band The Beatles could have been.” Clearly it’s meant as a joke, but I can’t say I disagree with the sentiment. Paul never would have made Ram or Band on the Run with Ringo dragging him down. Get your peace and love and tiny sunglasses out of here, Ringo. We want that “Monkberry Moon Delight.”

Seeing as I don’t know of any other rock stars from Niger, I’m going to go ahead and call Bombino “Niger’s biggest rock star.” The former herder (as in livestock) builds his template on a North African genre called Tuareg, tempering it with more contemporary rock and blues. The result is a trippy, surf-laden sound that led to The New York Times dubbing him “The Sultan of Shred.” And his indie cred is impeccable: Bombino has collaborated with both The Dirty Projectors’ David Longstreth and The Black Keys’ Dan Auerbach.

On The Big Freeze, Laura Stevenson turned the amps down. Her previous two albums (Wheel and Cocksure) flirted with buoyant indie punk, but the Long Islander’s latest strips that away. The focus is put on Stevenson’s songwriting, which is at once intensely personal and universally cathartic. And her voice has never sounded better; Stevenson’s twisty-turny phrasing bears the emotional load, guiding the album through its ups and downs. Also playing: Portland cellist Completions and Madison’s Addison Christmas (Trophy Dad’s Abby Sherman).

Jon Dore is Canadian, which is generally a huge plus in comedy (for example: Seth Rogen, Jim Carrey, Mike Myers). His comedy is built around awkward pauses — the art of stretching a joke to its limits before bringing it home. And if Dore’s hangdog mug looks familiar, it may be because you saw him mug one of the non-mother characters on How I Met Your Mother. (It was Marshall.)

I love burgers, you love burgers, everybody loves burgers. Madison Burger Week celebrates the art of meat between buns. A wide array of local restaurants will participate, and some will concoct one-off burgers specifically for the week. Bonus: If you pair your burg with a tall, cool Budweiser, one dollar from each beer goes to the River Food Pantry.

As the lead singer of chart-toppers Matchbox Twenty, Rob Thomas is one of the most recognizable voices of the ’90s. (Also, he won three Grammys for the song “Smooth,” with Carlos Santana.) But even beyond “3 A.M.” and “Real World,” Thomas is a successful solo artist, releasing four albums beginning with 2005’s double platinum …Something to Be up to this year’s Chip Tooth Smile. And he appeared in an episode of It’s Always Sunny in Philadelphia playing himself alongside comedian Sinbad as Dennis’ bullies at rehab, which is truly a must-watch episode. Rising country star Abby Anderson opens.

Metalcore is one of the most popular subgenres of heavy music, and All That Remains are one of metalcore’s finest bands. The Massachusetts group formed in the late ’90s, anchored by chugging guitars and the instantly recognizable howl of its frontman, former Shadows Fall singer Phil Labonte. More than two decades in, All That Remains is still throwing down harder than ever, so be ready to open up that fucking pit. With fellow heavy hitters Unearth, plus Big Story and The 9th Planet Out.

Fans of independent film and roofs won’t want to miss the opening of MMoCA’s Rooftop Cinema series. The first installment will include three shorts by Sky Hopinka, a member of Ho-Chunk Nation whose work tells distinctly indigenous stories. Rooftop Cinema will run Friday nights through the month of June, with a different film (or films) each week.

A Day to Remember

Florida’s A Day to Remember is among the most successful punk bands of the last decade. The quintet was one of the first to combine pop-heavy punk with melodic hardcore, frequently careening between harsh and clean vocals. I remember hearing “The Plot to Bomb the Panhandle” for the first time as a New Found Glory-loving teenager, and it being like a bolt of lightning. And in the years since, the boys from Ocala have rocketed to the top of their genre, selling millions of albums and playing shows alongside the likes of Blink-182 and Bring Me the Horizon. With fellow mosh-masters Knocked Loose and Boston Manor.

As a college student in Chicago, I recall seeing The O’My’s stickers everywhere around the city. And it turns out, the only thing the duo is better at than self-promoting is making music. Their sound exists at the crossroads of hip-hop and art rock, utilizing two wildly different genres without it ever feeling forced. There’s a reason that Chance the Rapper collaborates with these guys so often.

A highlight of this year’s Waterfront Festival is Trapper Schoepp, a Milwaukee roots rocker who recently appeared at The Sylvee as support for Shovels & Rope + Frank Turner. He’ll play two sets on June 9, one solo acoustic and one with his full band. Schoepp’s latest album, Primetime Illusion, features a song with a co-writing credit to some guy named Bob Dylan. Other notables on the fest lineup are Golpe Tierra and Jillian Rae on June 8, and Nickel & Rose, Wilder Deitz and MarchFourth on June 9.

This is a showcase for some of the Midwest’s finest alternative rock. Chicago’s North by North headlines, bringing with them a combination of classic garage pop and more esoteric, proggy influences. Support comes from three Madison bands: Labrador (who just recorded a live session for Wisconsin Public Television), The Hasbians and Bent Antenna.

Madison’s own version of the Grammys — the MAMAs — seeks to crown the best in an array of categories, from rock and hip-hop to “jazz mixed with spoken word,” the latter of which will be performed live by the Johannes Wallmann Quintet with Rob Dz. Other performers will include funk outfit Wurk, pop-punkers Help Desk, rapper KiloakaSkitL’z, Americana lifers Robert J. & The Band of the Free, plus classical compositions by Panochromatic Steel and The Mosaic Chamber Players.

Man, the Terrace is killing it on classic family films this week. In The Goonies, Samwise Gamgee and Thanos (er, Sean Astin and Josh Brolin) — along with their motley crew of friends — search for pirate treasure on the Oregon coast. All the while, they’re trying to evade the evil Fratelli family, who are weirdly OK with murdering a bunch of children. Fun for the whole family!