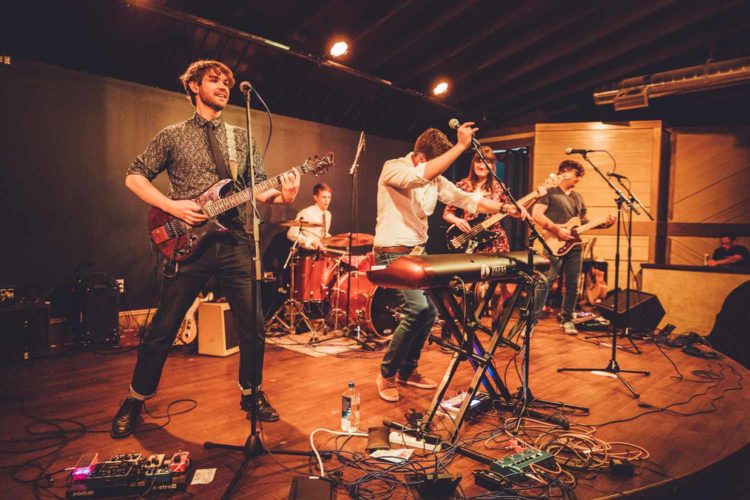 As a member of The Silos, Walter Salas-Humara helped kickstart the alt-country movement. A Florida native, Salas-Humara finds inspiration in both roots rock and post-punk. If you like your sonic exploration country-fried, then may I recommend 1990’s The Silos. With post-punk ethos and marked Southern twang, the album otherwise known as “The One with the Bird on the Cover” ended up being a harbinger for countless bands to pop up over the next decade. Joining him here is Josh Harty, Madison’s folk transplant from North Dakota.

When the weather starts getting warmer, it ushers in what I like to call “pop punk season.” It’s that warm, carefree time of year when I find myself revisiting all my favorite records of that genre, from Blink-182 to Bad Religion. And somewhere between those two bands sits Coasting. The Madison quartet plays airtight, forever-young pop punk that occasionally takes on a caustically political bent. And their stage banter is very Blink-esque. It hasn’t been this fun to watch a group of bandmates rip on each other since The Mark, Tom and Travis Show. With Dundee punks Delinquents and the hardcore-influenced Trivial Pleasure.

The son of Cheap Trick guitarist Rick Nielsen, rock ‘n’ roll is in Miles Nielsen’s blood. With his own band The Rusted Hearts, the younger Nielsen specializes in an eclectic blend of rock, repurposing elements of soul and power pop while maintaining a dusty, western atmosphere. He’ll be joined by Andy Jenkins, a Virginia native and fellow power pop throwback.

When it comes to Midwestern rap bills, it doesn’t get much better than this one. Longshot is a Doomtree associate from Minneapolis-via-Chicago, and AP Counterfeit calls Cincinnati home. Together, the two specialize in rhymes that trip out both lyrically and musically, with Counterfeit especially splicing in some heavy dystopian imagery into his lyrics. Plus, there’s a stacked support bill that includes Taiyamo Denku, Outside Voices, Chas and Red the Bully.

Thursday through Saturday, May 23-25, Comedy on State (info)

At 28, I don’t really have heroes anymore. But Marc Maron is certainly a guy I look up to. He’s a self-flagellating kindred spirit whose neuroses are always rooted in empathy. Listening to his WTF podcast, it’s fascinating how Maron uses his own needling self-deprecation and boundless cynicism to draw huge reveals out of his guests. But WTF only introduced Maron to the mainstream; among comedy’s most dedicated fans, he’s been a folk hero for three decades. On longtime champion Conan O’Brien’s podcast, the host marveled at Maron’s ability to both win and lose an audience at the same time. But for Maron, it’s in the losing that he finds inspiration.

Everyone knows Smash Mouth. And to a certain extent, everyone loves Smash Mouth. It’s tough to think of a song more instantly recognizable than “All Star.” But despite the ubiquitousness of that song, Smash Mouth was never a one-hit wonder. Have you forgotten their other platinum-selling hits like third-wave ska touchstone “Walkin’ on the Sun” or their cover of The Monkees’ “I’m a Believer”? Shrek jokes aside, Smash Mouth is one of the most iconic pop groups of ‘90s. One day, we will all die, and while our bodies decompose and return to the Earth, “All Star” will still be playing.

As a product of both the jazz and jam scenes, Snarky Puppy can improvise with the best of them. Featuring up to 20 members at times, the New York-via-Texas collective are masters of lush musical interplay that careens through an array of genres. This is jazz, by way of funk, performed like a rock concert. Snarky Puppy’s 13th album, Immigrance, was released in March.

Three Minneapolis metal bands are coming to town to melt your face like you opened up the Ark of the Covenant. Decomposer plays a punk-flecked brand of metal that tempers some of its guttural vocals with early-Rancid guitar solos. Maniacal Force supplies a black metal blitzkrieg. And lastly there’s Deterioration, who have an EP with a cover that features a guy ripping his own dick off. Local support will come from Warbastard, whose sludgy speed metal will fit right in.

From Kacey Musgraves to Tyler Childers, country’s lauded new guard always seem to share the influence: John Prine. The genial folk hero has spent his decades-long career writing songs rich in both emotion and humor. Few artists can paint lyrical pictures as well as Prine, and even fewer can do it in such an accessible way; Prine’s music is sneakily smart. He can capture Midwestern malaise in a way that few else can. If a space alien were to ask me what the our little region of this planet was like, I’d hand them a John Prine record. Because no one could explain it better than him.

Local favorites Fire Heads are returning to their home court and surrounding themselves with some awesome support. First up is France Camp, a Twin Cities psych rock throwback noted for their wild live show. And all the way from Ohio comes the jangly ’60s pop of Part Time Lover. Last but not least is one of the first appearances by a newer Madison group called Histo, graduates of the Doug Martsch school of swirly guitars.

Connor Falcon Brennan was so confident in Woodrow’s music that he quit pursuing a doctorate in medical physics to focus on the band full-time. It seems to be paying off, too. The indie pop band has steadily released music and gigged around the state, all leading up to this release show for their full-length debut, Sincerely. But perhaps the greatest thing about the band is how they chose to introduce themselves to the world: via this Halloween-inspired cover of emo-punk anthem “Helena.” Very peculiar for a band that is not emo in the slightest. Proceeds from the show will benefit Share the Health: Free Women’s Health Clinic. With support from Laska, Man Called Noon, and Claxy.

Saturday, May 25, Comedy on State (info)

The only thing comedian Doug Benson seems to love more than weed is movies, and Benson has been hosting the podcast Doug Loves Movies for a decade. In it, the Super High Me comic and his special guest (usually film critics, actors, and/or comedians) discuss movies and play movie-related games. Think of it as an episode of The Tonight Show, but Jimmy Fallon is absolutely blazed out of his skull.

Hot patootie, bless my soul! One of wildest interactive film experiences like, ever, is back. The Rocky Horror Picture Show is an OG cult hit, largely because of the audience participation the campy rock musical requires. Joining the festivities here is Velvet Darkness, Madison’s own Rocky Horror shadowplayers. Velvet Darkness also host “virgin rituals,” so those of you who don’t like getting up in front of crowds may want to hang toward the back.

Everyone has that one band that they have no reason to love but do anyway. For me, that band is Fastball. The Texas power pop group scored major hits in the ’90s with “The Way” and “Out of My Head,” both of which are great songs. But for me, they’ll always be the band that did “Sooner or Later,” the sun-bleached rocker that I first heard on the soundtrack to Brink!, a Disney Channel original movie about aggressive inline skating. That might be the most ’90s sentence I’ve ever written.