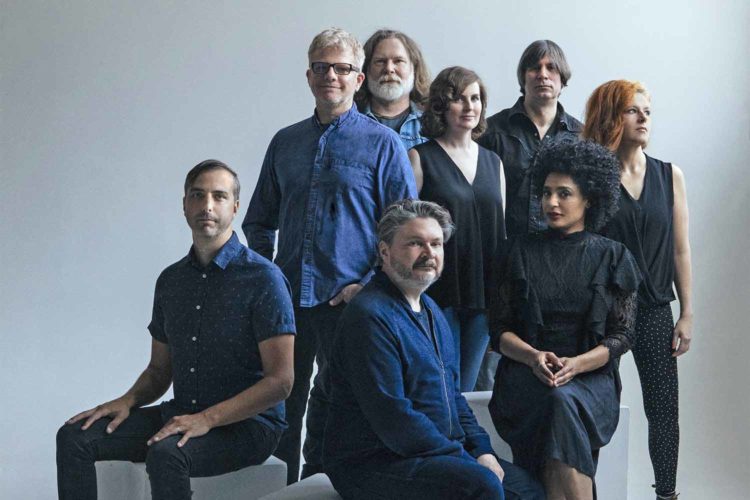 Chris Pureka is always watching. The Portland-based singer-songwriter is a masterful observer of human intricacy. She seems to know what we’re saying when we’re not saying anything, and has spent almost decades putting it to music. Pureka isn’t unlike Bruce Springsteen in her ability to find the beating heart of her subjects, no matter how mundane. Nashville folk pop duo The Harmaleighs will open.

Imagine walking into a job interview, talking shit about the job you’re applying for and then being offered it. That’s more or less what happened to Samantha Power. She immigrated to the U.S. from Ireland as a child, and as a journalist developed a foreign policy view that was highly critical of her adopted home. Her unromanticized yet optimistic take on America caught the eye of then-Sen. Barack Obama, whom she’d spend the next decade working with (ultimately becoming U.S. ambassador to the United Nations). A former war correspondent and Pulitzer Prize winner, Power will discuss her new memoir, The Education of an Idealist.

The 1990s were a decade filled with left field hit songs, including “Mmm Mmm Mmm Mmm,” a grumbling pop rock gem from Canadian band Crash Test Dummies. It’s also probably one of the biggest songs of the ’90s to be recorded in Wisconsin — at Music Head Studios in Lake Geneva. The band’s original lineup is currently on a tour celebrating the 25th anniversary of their album God Shuffled His Feet, on which “Mmm Mmm Mmm Mmm” appeared. (The actual actual anniversary was last year. This is just a long tour.)

I saw Blackberry Smoke live once… sort of. I walked past their stage at Summerfest on my way to see another artist, but I wish I’d stayed longer. The Atlanta quintet sound like they crawled out of a swamp somewhere, catering in country-fried hard rock licks. And they exude enough southern swagger to make The Black Crowes look like shrinking violets. And it’s a homecoming of sorts for opener The Record Company; frontman Chris Vos grew up on a dairy farm in Kenosha County.

Like Young the Giant, The Band Camino represents a revival of ’80s arena rock. With huge choruses and bigger guitars, the group shows a commendable willingness to play to the back of the venue. For further reference, check out their guitar hero single “Daphne Blue” from their 2019 EP tryhard. Support comes from cinematic Canadian rockers Valley.

2019 is shaping up to be Adam Devine’s year. The former Workaholics star is currently killing it on HBO’s hysterical The Righteous Gemstones, and now he’s headlining in this techno-comedy film. Devine plays Phil, a lonely and unfulfilled man who lives on his phone. Soon a new digital assistant “Jexi” (voiced by Rose Byrne) starts helping him put his life together. But as Phil begins weaning himself off his phone, Jexi fights back. Imagine a funnier version of Her. This is an advance screening; Jexi hits theaters on Oct. 11.

Two of the coolest, heaviest bands of the ’80s are teaming up to blow out your eardrums. Prolific sludge metal icons Melvins played a huge influence on grunge; Kurt Cobain produced their 1993 album Houdini. Redd Kross, meanwhile, has blurred the lines between hardcore punk and powerpop for almost 40 years. Their roster has at times featured members of Black Flag, Bad Religion and Pearl Jam. Support comes from longtime Melvins collaborator (and former Big Business guitarist) Toshi Kasai.

As frontman of NEEDTOBREATHE, Bear Rinehart was already making a pretty comfortable living as one of the biggest names in Christian rock. Accordingly, secular music fans were a bit surprised to learn it was Rinehart behind the mysterious project Wilder Woods. But under that name, Rinehart is making pop music with a folk skeleton, marrying lyrical intimacy to huge pop production. With Rodrick Cliche & Four20s, a session musician all-star team with D’Angelo and A$AP Rocky on their resumes.

Donivan Berube has always been a somewhat restless soul. With his old group Blessed Feathers, Berube and his wife traveled around the country, sleeping in tents and releasing indie music. But after his marriage fell apart — and his band, as a result — Berube was forced to recalibrate. As a solo artist, he’s creating haunted folk rock that’s a dynamic addition to his growing catalog. He’ll follow Utah singer/songwriter Ritt Momney and Nashville’s Shane T.

To watch a soap opera, you have to check both logic and reason at the door. Late Chilean director Raul Ruiz applied that pathos to this freewheeling film, shot in 1990. Its vignettes featured characters that acted on impulse, boorishly crashing into each other’s stories. It seemed to foreshadow the anarchic, unhinged nature of modern sketch comedy under the guise of an art film. The Wandering Soap Opera went unfinished for almost three decades but was completed in 2017 by Ruiz’s wife and longtime collaborator Valeria Sarmiento.

Evil Dead: The Musical turns musical theatre on its bloody, undead head. The show importantly maintains the gory, mind-bending brilliance of Sam Raimi’s original 1981 film, but it also turns its camp factor up to the max through the power of song and dance. The University Theatre production ends this week with a handful of final performances.

If you don’t know whether to laugh or cringe with New York-via-Madison comic Geoffrey Asmus, that’s kind of the point. His style is weaponized awkwardity, filtering observational comedy through an absurdist lens. He sometimes looks like he’s on the verge of breaking down. He might take his shirt off. And it is always hysterical. Joining him are a pair of quirky Chicago comics, Gena Gephart and Toler Wolfe, both ex-Madisonians.

Perhaps the most vital sex advisor since Dr. Ruth, Dan Savage is also a Madison hero. He was here during the early days of The Onion, and his friendship with co-founder Tim Keck led to the creation of his Savage Love column. (Albeit in a Seattle alt-weekly — we can’t win ’em all.) Savage doesn’t live here anymore, but it’s clear the city still holds a place in his sex-positive heart. Here he will perform here a live version of his call-in podcast, Savage Lovecast. All the questions you were too embarrassed to ask, answered live on stage!

Throughout his three-decade career, Ben Harper has quietly turned into one of the most revered names in roots music. His aplomb at everything from soul and gospel to alternative rock makes him a versatile player, and with his band The Innocent Criminals, Harper puts on one of the best live shows around. He also wrote a contender for the catchiest song of the 1990s with “Steal My Kisses,” which is now going to be stuck in my head for the rest of the week.

This Canadian indie rock collective has served as an incubator for some of the finest artists around, including founder Carl Newman, Neko Case and ex-member Dan Bejar (Destroyer). But this particular show is special for more reasons than just getting to see icons like Newman and Case in action. Friday7 also marks the release date for the band’s eighth album, In the Morse Code of Brake Lights. With support from experimentally-inclined indie folker Lady Lamb.

Surf Curse’s Nick Rattigan and Jacob Rubeck spent much of their childhoods split between the Nevada desert and sunny L.A., which might explain why their bright melodies can sound so haunting. They have a dark, echoing quality similar to driving down a remote highway at night while still keeping things a little beachy. It’s a perfect soundtrack to both bonfires and breakdowns alike. The band released a new record, Heaven Surrounds You, on Sept. 13.

Kat and the Hurricane

Janesville duo Kat and the Hurricane describes their sound as “sad lesbian music.” If you’re curious as to what that sounds like, let me try to illustrate. Take Phoebe Bridgers’ eternal bummer and add the pristine pop songcraft of artists like The 1975 and Coldplay, and the end result is Kat and the Hurricane. It’s pretty good, in other words. Support comes from Michigan indie pop crew cloudlight and local troubadour Linn Jennings.

During my brief time working in Hollyweird, I had the opportunity to read (and give notes on*) an early draft of the Elton John biopic Rocketman. That was in 2012, so certainly things have changed in that time. But from what I’ve gathered, the Taron Egerton-starring musical still has the same surreal, technicolor vibe. Basically, it’s the kind of atmosphere you’d want for the life story of one of rock ‘n’ roll’s most flamboyant performers. *=If you hear “My Father’s Gun” at any point during Rocketman, I will happily take credit for it.

I love horror, and Hereditary was my favorite film of 2018. It was psychotically unsettling in a way seldom seen in mainstream movies. Notably, it announced director Ari Aster as one of his generation’s preeminent voices in the genre. His follow-up, this year’s Midsommar, cements this. It involves a trip to Sweden, a pagan cult and some truly fucked-up imagery. And I doubt you’ve ever seen a movie this terrifying that takes place mostly in daylight.

When you form a tribute band, it’s rare to even interact with the artist you’re honoring, let alone play with them. But over the years, these Grateful Dead coverers have been joined by a variety of Dead members, including Phil Lesh, Bob Weir and Bill Kreutzmann. It makes sense — Dark Star Orchestra might be the best simulacrum of the beloved band going. (And that includes Dead & Company, Weir and Kreutzmann’s collaboration with John Mayer.)

Norwegian singer Sigrid makes the kind of anthemic pop that turned Lorde into a world-dominating star. And like the “Royals” singer, Sigrid doesn’t seem as if she was created in some sort of pop laboratory; there’s an authenticity to her. At this rate, Sigrid is well on her way to international fame, touring around the world with artists like George Ezra and Maroon 5. She released her debut full-length, Sucker Punch, in March. Raffaela will open with her witty, well-read indie pop.

This is a night of dark music for sci-fi geeks. Leading the charge is Curse, a Baltimore-based band specializing in synth-laden industrial metal. And joining them are a trio of local artists led by Telechrome, a group you’d expect to find performing at some neon-soaked bar in the Blade Runner universe. Also appearing is the synth-heavy horror metal of Red Museum and the melancholic post-punk of Woke Up Crying.

Often called “the Scandanavian Mitch Hedberg,” Ismo Leikola sees the world in his own way. Much of his comedy comes from cultural misunderstanding — Ismo hails from Finland, and English is not his first language. Grammar nerds will love him, as he takes a certain glee in breaking down the absurdities of the English language. But this isn’t niche comedy; if you have a sense of humor at all, you’ll laugh along with the Ismo.

These ’80s hitmakers have endured the slow march of time to remain relevant in 2019. (Though they may have Weezer to thank for that.) But Toto are more than just the “Africa” guys. The L.A. pop rockers have serious progressive tendencies, playing in strange time signatures and incorporating a wide array of sonic experiments into their tunes. And while “Africa” is great and all, it’s important to point out that Toto’s best song is, was, and always will be “Hold the Line.”