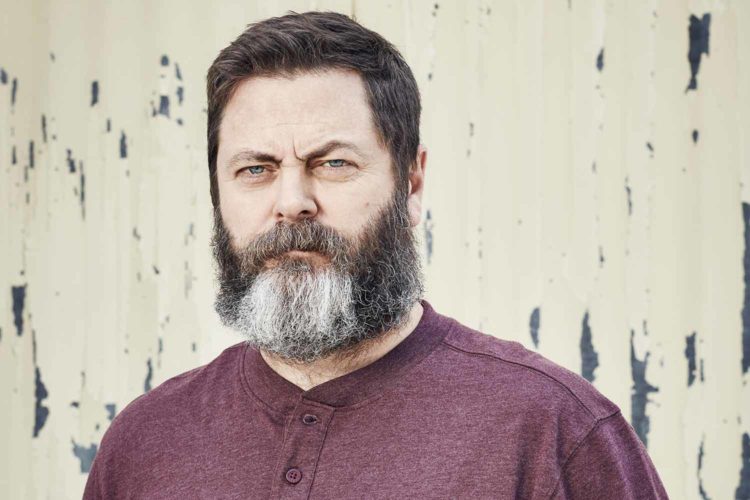 Doug Stanhope carries on Sam Kinison’s boundless rage and caustic takes, albeit with a more impish vibe. Once protested here in Madison, he’ll never shy away from an extreme point of view. He’s the kind of dude you’d want next to you on a barstool. Even if you don’t agree with what he’s saying, the way Stanhope says it is sure to make you laugh.

Fall is emo season, and the first group of sad boys to come through is Free Throw. But unlike a lot of their Midwestern counterparts, the Nashville crew’s twinkle comes with a slightly rougher edge. Their latest LP, What’s Past is Prologue, careens into chugging guitars and throat-shredding vocals before pulling it all back into a quiet intimacy. With born hot singer-songwriter Chris Farren (of Antarctigo Vespucci and Fake Problems), Canada’s Youth Fountain and New Yorkers Macseal.

Russian Circles do metal without any pesky vocals getting in the way. Their expansive instrumental sound draws on post-rock’s noodly tendencies while maintaining jackhammering backbeats. Plus, the Chicago trio is named after a drill in the most metal sport of all: hockey. Listening to the unrelenting wallop of “Kohokia,” a super heavy jam from 2019’s Blood Year, makes me want to drop the gloves and brawl. Support comes from a fellow band of Chicagoans, art rockers FACS.

Noise music has a tendency to pummel the listener into the ground. Portland musician Avola makes her wall of sound a bit more palatable, tempering her aggressive tendencies with undulating harmonies. She’ll also perform with the band Elrond, the duo with which she makes techno-pocalyptic dance music. Adding to the noise will be Madison DJ Saint Saunter and drone duo Woodman/Earhart, featuring Emili Earhart of Cave Curse.

‘All the President’s Men’

As a Professional Journalist, I feel it is within my power to rank All the Presidents’ Men as the best film about the medium. Starring Robert Redford and Dustin Hoffman as Washington Post reporters Bob Woodward and Carl Bernstein, the 1976 thriller depicts the true-life unraveling of the Watergate scandal. Stick around for a post-screening discussion moderated by Cap Times film critic Rob Thomas. It also ties in with this week’s Cap Times Idea Fest, specifically a panel concerning the Trump era (barf) with a group of WaPo scribes.

To paraphrase Mallrats’ Brodie Bruce, “I love the smell of commerce in the evening.” Local vendors will display an array of arts, crafts and food stuffs. Plus, attendees can also enjoy live music and “pop-up restaurant experiences.” This is a chance to support local artisans and enjoy one of those fleeting Wisconsin summer nights.

It’s been an interesting few years for Pinegrove. They released a career-launching album in 2016, only to disappear the next year so enigmatic frontman Evan Stephens Hall could sort his shit out. Then in 2018, they returned as suddenly as they’d left, with a new album called Skylight. It expands on the Pinegrove formula of emo-country, bringing clear-eyed messages of self-improvement and empathy. Hall might still carry some baggage, but Skylight is a return to form for one of its generation’s most promising bands. Also appearing is Oakland troubadour Stephen Steinbrink and Quebecois indie rocker Common Holly.

If you thought the Marleys were the only family in reggae, allow me to introduce you to the children of Denroy Morgan. Acclaimed band Morgan Heritage formed when Denroy’s kids were still actual kids, back in the early 1990s. Since then, the group has released more than a dozen albums and won Grammys for two of them. And Madisonians will be stoked to learn that local favorite reggae experts Natty Nation will open.

Brooklyn’s Stolen Jars are more abstract than they let on. Sure, their melodies are catchy as hell, but they have a penchant for intricate instrumentation. Imagine Yeasayer’s ability to craft accessible anthems without ever sacrificing their prevailing weirdness. Stolen Jars makes art-pop that leans heavily on the “pop” half of that descriptor. According to What will be there for local support, plus a solo set from singer/songwriter Grace Olson.

There are somehow still 20 Democrats vying for the presidential nomination, but only 10 made the cut for this next debate. Will Elizabeth Warren or Bernie Sanders finally overtake Joe Biden as the favorite? Is Beto going to say the F-word on live TV? Maybe grab a cold beer from the concession stand (Mayor Pete has suggestions) and numb some of the existential dread this all inspires.

When Prof came to Madison in early 2018, he organized a flag football game in Tenney Park and live streamed his adventures downtown. The Minneapolis rapper knows how to have a good time. He’ll share that knowledge — along with his often hilarious rhymes — at Majestic’s final Live on King Street of the year.

The Russ Liquid Test takes the jazzy legacy of their hometown (New Orleans) and marries it to spiky electro beats and wobbly funk. With a penchant for live improvisation, Russ Liquid is jazz updated for the digital age. Adding to the flavor will be the similarly minded Beak Nasty, a duo of Wisconsin expats now based in Minneapolis.

If you like indie pop with just the right amount of twee, check out Gentle Brontosaurus. The Madison five-piece delivers a relaxed take on the genre, with garnishes of both trumpet and ukulele. And it maintains an admirable quirkiness without straying too far into manic pixie dream band territory. With support from genre-exploding musical collective The Earthlings.

Nick Offerman is not Ron Swanson. While the actor and comic shares his beloved Parks and Recreation character’s staunch self-reliance, the real Offerman is more liberal than libertarian. He once called Donald Trump a “cheese-dick criminal,” which is an incredible turn of phrase. Offerman has a folksy, Gen X Mark Twain wit and an extensive vocabulary — he’s more like barnstorming orator than a touring comic. Due to high demand, he’s doing two shows.

It’s a big year for stand-up vet Gary Gulman. He’s got a new special called The Great Depresh coming out on Oct. 5, the day after Joaquin Phoenix’s Joker movie — which Gulman also appears in. And with a sense of humor that explores darkness with good cheer, it’s not hard to see why the former Last Comic Standing finalist has caught on. And Gulman will appear with the amusingly awkward Emmy Blotnick, who will also headline her own show on Thursday, Sept. 12.

Travel the world without leaving the 608. The fest will showcase 10 globe-spanning performances, from North African club music to Honduran alt-pop. Plus, the whole thing is free. Think of all the money you’ll save on airfare!

This Wisconsin political summit is back and sure to be as thought-provoking as ever. Dozens of speakers will discuss a variety of topics both local and national, all with the central theme of “reaching a better state.” Highlights include one-on-one panels with Democratic National Committee chairman Tom Perez and Republican U.S. Senator Ron “Banned in Russia” Johnson. But this year’s premier event might be “The Castro Brothers of Texas,” a talk with twins Julián (a former Obama cabinet secretary and current presidential hopeful) and Joaquin (a congressman and the one with the beard).

The Hussy have a new album called Looming coming out on Sept. 27, and it’s a certified banger. Its 16 tracks paint the Madison garage punk duo-turned-trio as rejuvenated after a four-year gap between albums. On Looming, The Hussy is as full of piss, vinegar and bong resin as ever. This show will kick off a month-long tour and will also include Detroit punks Werewolf Jones and Tart, plus Madison slowcore duo Daughters of St. Crispin.

Calling all pop punk defenders. This lineup features some of the Madison area’s best bets for power chord-drenched shout-a-longs. The irreverent Coasting will headline, and fans of Blink-182’s Take Off Your Pants and Jacket era should absolutely check out their EP Big Whoop. Rounding things out are Jynxer, Pep Talk and Since When.

Tycho’s Scott Hansen gained a new voice for his latest album, this summer’s Weather, with singer Saint Sinner (Hannah Cottrell) joining Hansen on several tracks. Her ethereal voice blends seamlessly into the kaleidoscope of samples and synths that make up Tycho songs. Single “Japan” sounds like it came straight from the Drive soundtrack, with its cyber-noir aesthetic and lush synth leads. Joining them on this tour is Poolside, a dance group that includes members of The Rapture and Toro y Moi.

Wisconsin’s German heritage is strong, and this annual event is a pretty great way to celebrate it. More than 60 breweries will pour hundreds of beers, and attendees can also enjoy a proper German boxed lunch from Festival Foods. Ring in fall the right way: with a few pints of lager and a loaded brat.

Or maybe bloodies is more your thing. Bars and amateur competitors from all over the state will pit theirs against each other here, with you reaping the delicious benefits. And if none of those really do it for you — highly unlikely, but still — you can craft something to your liking at the gourmet build-your-own bloody bar. No matter who comes out on top, everybody wins.

Madison’s longest running neighborhood festival will literally fill Willy with great music. More than two dozen artists will perform, including a continuation of the Madison World Music Festival on Saturday. That day’s other highlights include Madison rockers Caryatids and Dash Hounds. And among others, Sunday will feature Labrador, Proud Parents and a trio of local artists performing the songs of John Prine.

Despite their name being NSFW, I’m pretty sure you could get away with playing STRFKR at work. It’s laidback, psychedelic indie pop that frontman Joshua Hodges once described as “dance music that you can actually listen to… but also you can dance to it.” In other words, no one at the office would mind if you played it. And worst case scenario: office dance party!

The Head and the Heart

From the moment they formed a decade ago, The Head and the Heart seemed destined for stardom. The Seattle group’s melodies are pristinely crafted and lend to massive singalongs — the kind that always sound better with a big crowd. And on their 2019 album, Living Mirage, the band swings for the fences. It’s practically an arena rock record, loaded with hooks and power chords that are gloriously ’80s. The Head and the Heart is like Fleetwood Mac for people raised on Fleet Foxes. Opening both nights is The Moondoggies, Washington state’s answer to The Band.