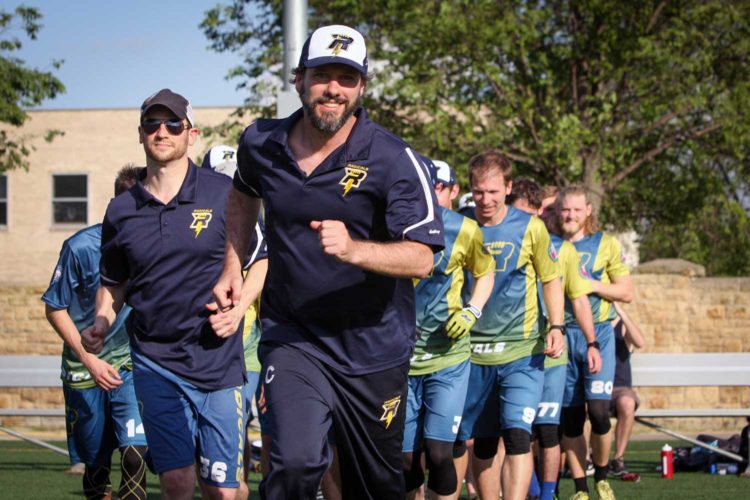 Let’s say you’re tasked with building the ideal sport to watch — one that’s exciting yet strategic and also full of drama. You can build in any of the aspects you like from other sports, duplicating what you like and discarding what you don’t like.

What is the ideal playing time limit? How much scoring is involved? How will the league be set up and what are the playoffs like?

It’s questions like these that American Ultimate Disc League vice president of marketing and Madison Radicals co-owner and coach Tim DeByl tackles on a daily basis.

DeByl, a Green Bay native who graduated from UW-Madison in 1996, was first introduced to the sport of ultimate frisbee several years ago when he played in a MUFA summer league. He estimates he was about 28 years old at the time. To hear DeByl tell the story, he was instantly hooked. When the AUDL began to form in 2012, DeByl decided he was ready to take an even deeper plunge. Now well over a decade after playing in his first game, ultimate frisbee and the AUDL have come to consume his life.

DeByl and the league have found themselves with a unique opportunity to bring the long-time counterculture sport of ultimate frisbee into the mainstream. The fledgling league has grown from eight founding teams to a whopping 24, including the Radicals, who joined in 2013. The league even had a TV deal with ESPN3 for three years, which ended in 2016. Since that breakthrough deal, the AUDL has become a regular feature on SportsCenter’s Top 10.

“Things have been moving at an amazing clip,” DeByl says of the league’s growth. “If you would have said four years ago that we would be on ESPN every week and be on cable and in talks with other broadcast companies, that would have been amazing. It is an exciting time for ultimate.”

Unlike the major sports in the American market, ultimate frisbee has benefitted from its relative newness on the professional scene. A rule change in the NFL or NBA or Major League Baseball — no matter how minor — can receive incredible pushback. The AUDL, however, can make changes to ultimate frisbee with relative ease and anonymity.

As a result, the AUDL has modified two major rules from traditional ultimate frisbee by adding referees and establishing time limits. Both moves were initiated in hopes of making the league more attractive to potential investors and fans.

“People put a lot of hard work into the sport, making it what it is, and now we feel like we are just tweaking it at the end here, making it a little more fan friendly and broadcast ready,” DeByl says.

“We want broadcasters to look at it and say, ‘This sport is perfect for TV. What you are doing makes perfect sense. We can fit this into our existing model better than we could soccer, and kind of better than baseball, right along there with basketball and football.’”

But maintaining the sport’s essence is key. He doesn’t want it to feel like the sport has been co-opted in some way to make money. He still wants it to retain the same counter-cultural identity that he fell in love with when he was first introduced to the sport years ago.

With that in mind, even the addition of referees brought with it plenty of checks on their power. An “integrity rule” allows players to be the ultimate arbiters on the field, overruling the officials when they believe they have made an error.

“We are trying not to use the league,” DeByl says. “We don’t want to feel like we are doing something that shouldn’t be done to it, and we are also working to not do that. It is hard to define what it means to be an ultimate person … and people like that it is not like other sports.”

In some ways, it’s almost the anti-sport sport.

“We embrace the people that have gotten away from sports because of the money involved or [other] issues,” DeByl says. “Some people are just sick of professional sports.”

While DeByl has made most of his strategic moves behind the scenes, it turns out what happens on the field matters, too — or at least the highlight videos do. Much like the rise of the NBA highlight video during the Vine era, ultimate frisbee lends itself well to quick, shareable content. Big plays happen frequently and can often involve incredible leaps and catches.

But despite the stir on social media and the regular SportsCenter appearances, the AUDL has a long journey ahead of it. For all of the growth the league has made in six seasons, it still in the red — as are the Radicals.

“Right now the team and the league are all losing money. It is really expensive. The media deals we are getting don’t quite cut it,” DeByl says. “But things are improving. Now [the players] get coach busses and they get their own beds at the hotels. … But we still have a long way to go.”

For DeByl, though, that challenge is exciting. He welcomes innovation and is happy to try new things to help put the league on the map.

“We can do anything. We want to put a drone in play? We can,” DeByl says. “We can kind of just say, ‘While we’re worried a drone might hit a fan, we also aren’t worried enough that we won’t let you do it.’ Whatever we want to try, we can.”

After all, it takes a radical business plan to meet the needs of a radical team.