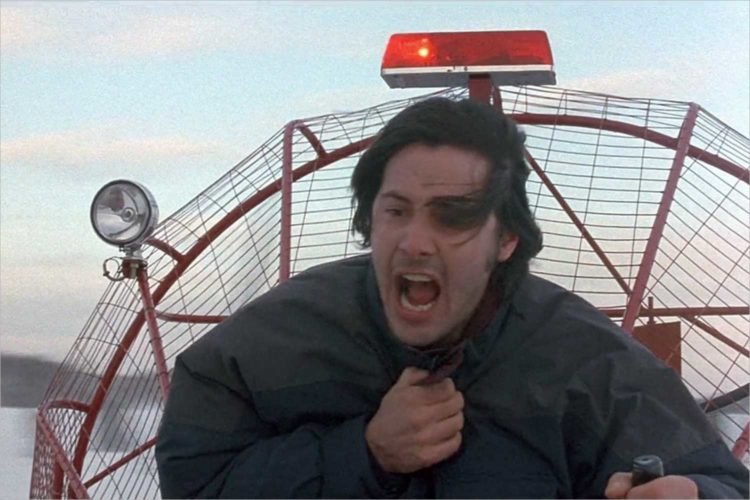 Two things I love unequivocally are 1990s action movies (or “Big Dumb Movies,” as I like to call them) and flicks that star Keanu Reeves. Released in 1996, Chain Reaction checks both of these boxes.

Directed by Andrew Davis (The Fugitive) and co-starring Morgan Freeman and Rachel Weisz, Chain Reaction is a techno-thriller about the invention of a hydrogen-based power source and the U.S. government’s attempts to prevent it from popularizing because that would collapse the world economy (stupid clean energy!).

As has been the case with the other two movies we’ve looked at so far, Chain Reaction’s Madison ties are centered largely around the Wisconsin State Capitol building, which again takes on the role of “U.S. Capitol.” So it’s not so much a Madison movie as it is a movie with a brief production stop in Madison (although nearby Lake Geneva and Williams Bay play themselves).

Keanu Reeves is Eddie Kasalivich, a University of Chicago student and machinist who is framed for the murder of his boss and for the destruction of their laboratory. He goes on the run with colleague Dr. Lily Sinclair (Weisz), who’s also being framed, and the two must work to clear their names. If you hadn’t guessed, the laboratory is home to that mysterious power source from earlier. And of course there’s an evil corporation pursuing the tech; Brian “Succession” Cox plays the CEO. 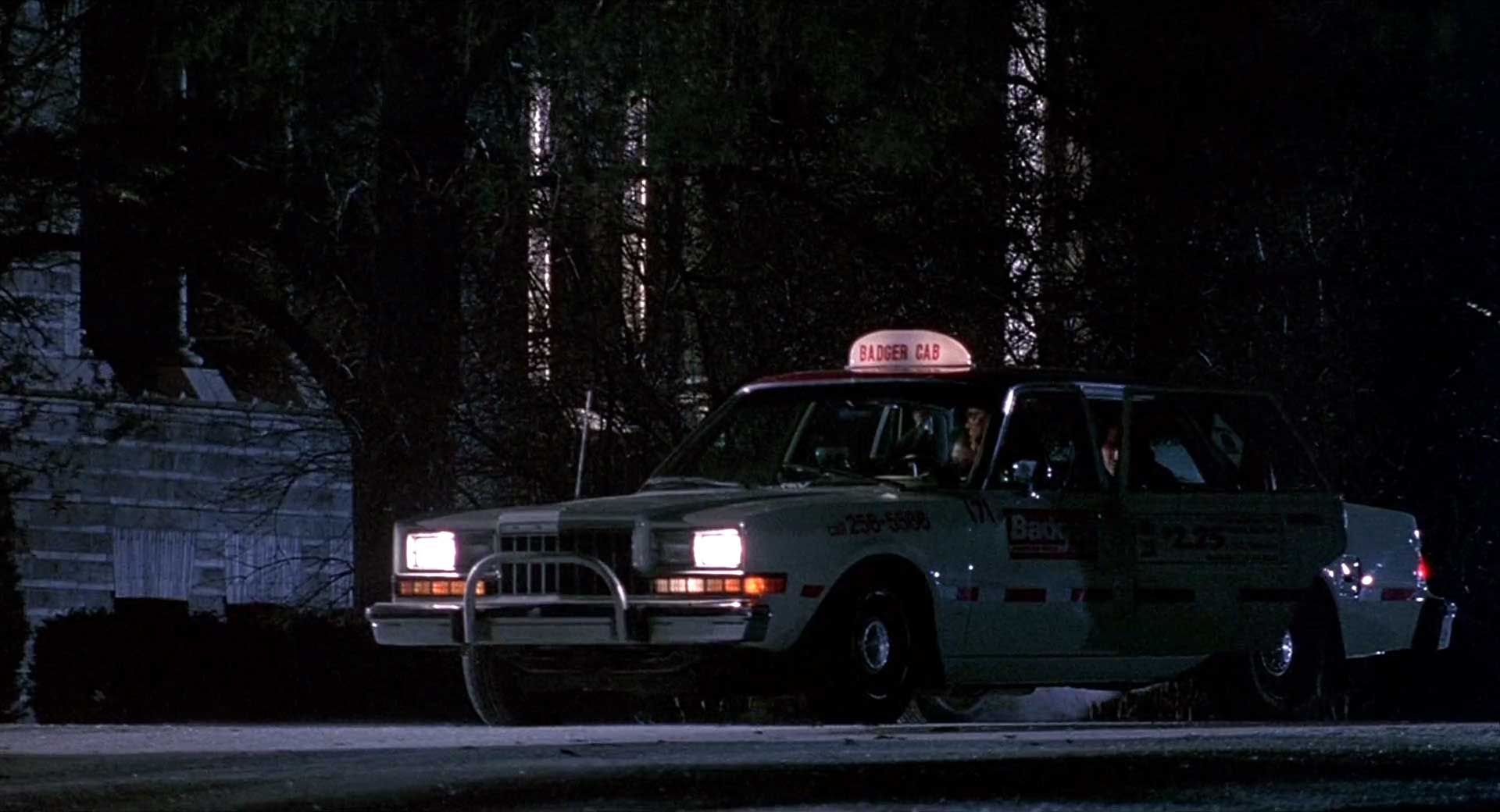 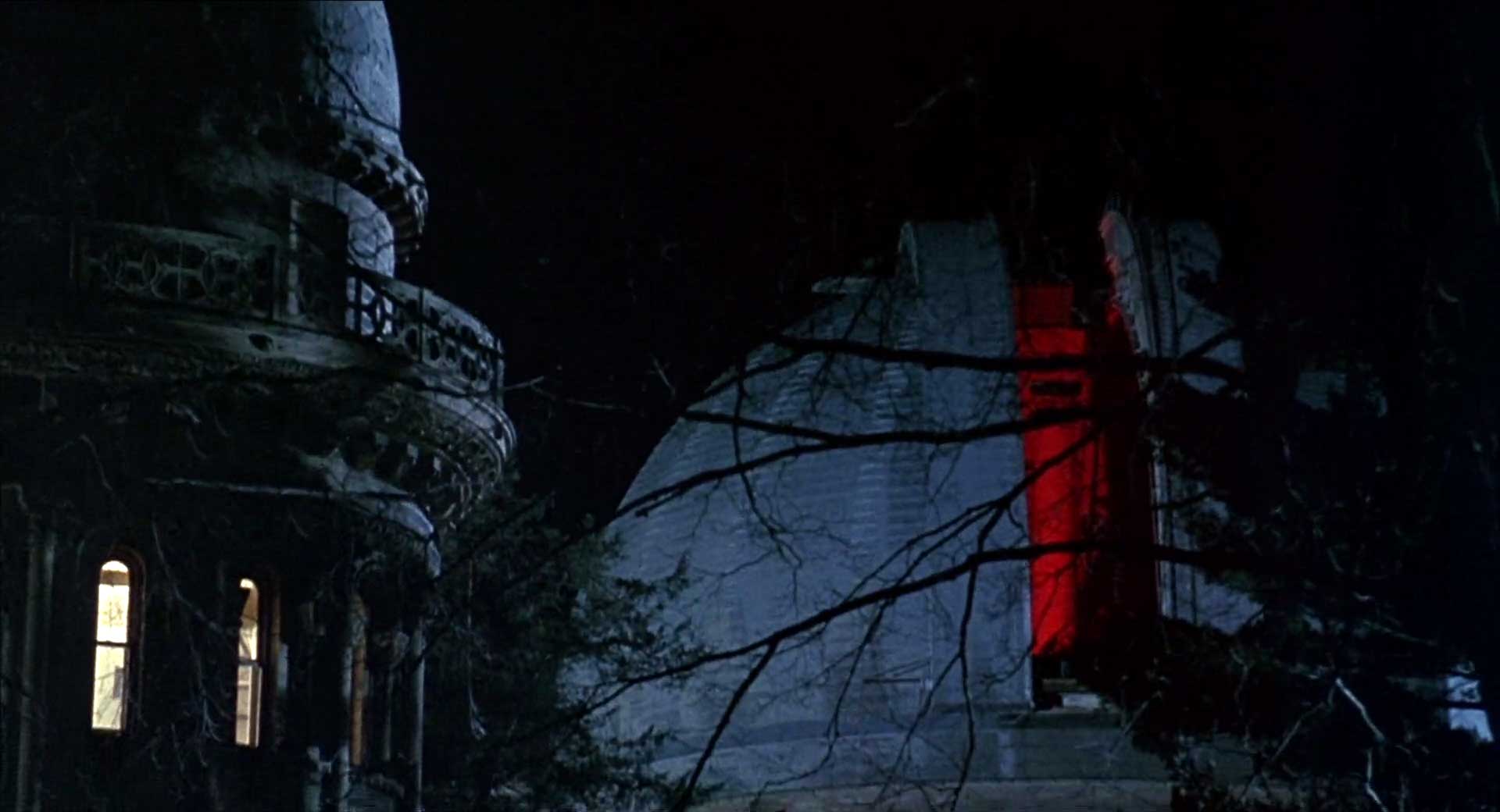 We first head north from Chicago at around the 36-minute mark, when Eddie and Lily arrive in a Badger Cab to the Yerkes Observatory. They’re hoping to find refuge there with Eddie’s old pal. We never learn much about her other than she has a conveniently liberal policy on harboring fugitives. 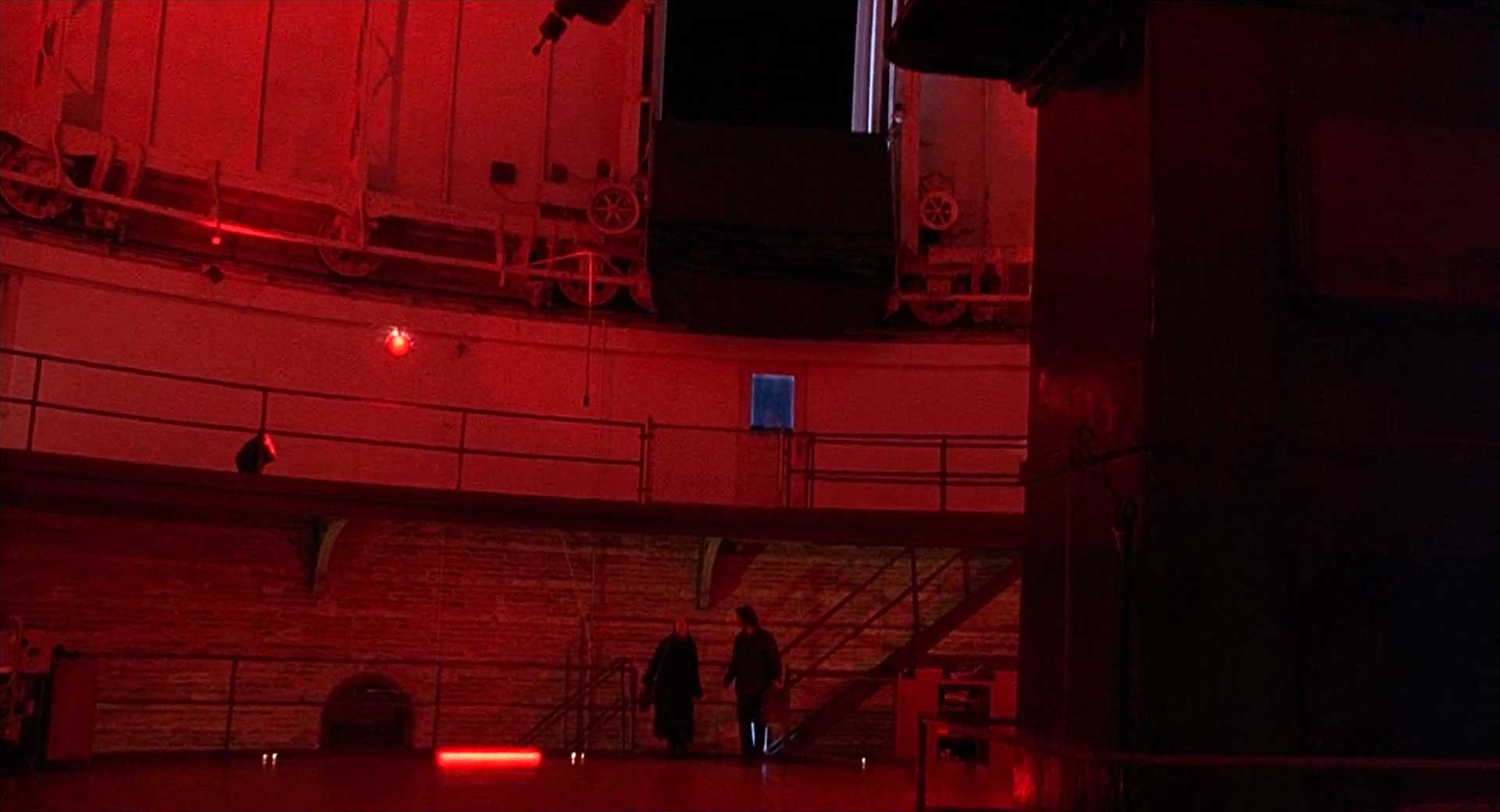 We get a couple shots of the rotunda and then one of the greatest cameos in Wisconsin film history: U.S. Sen. Tammy Baldwin, who was then a state representative! 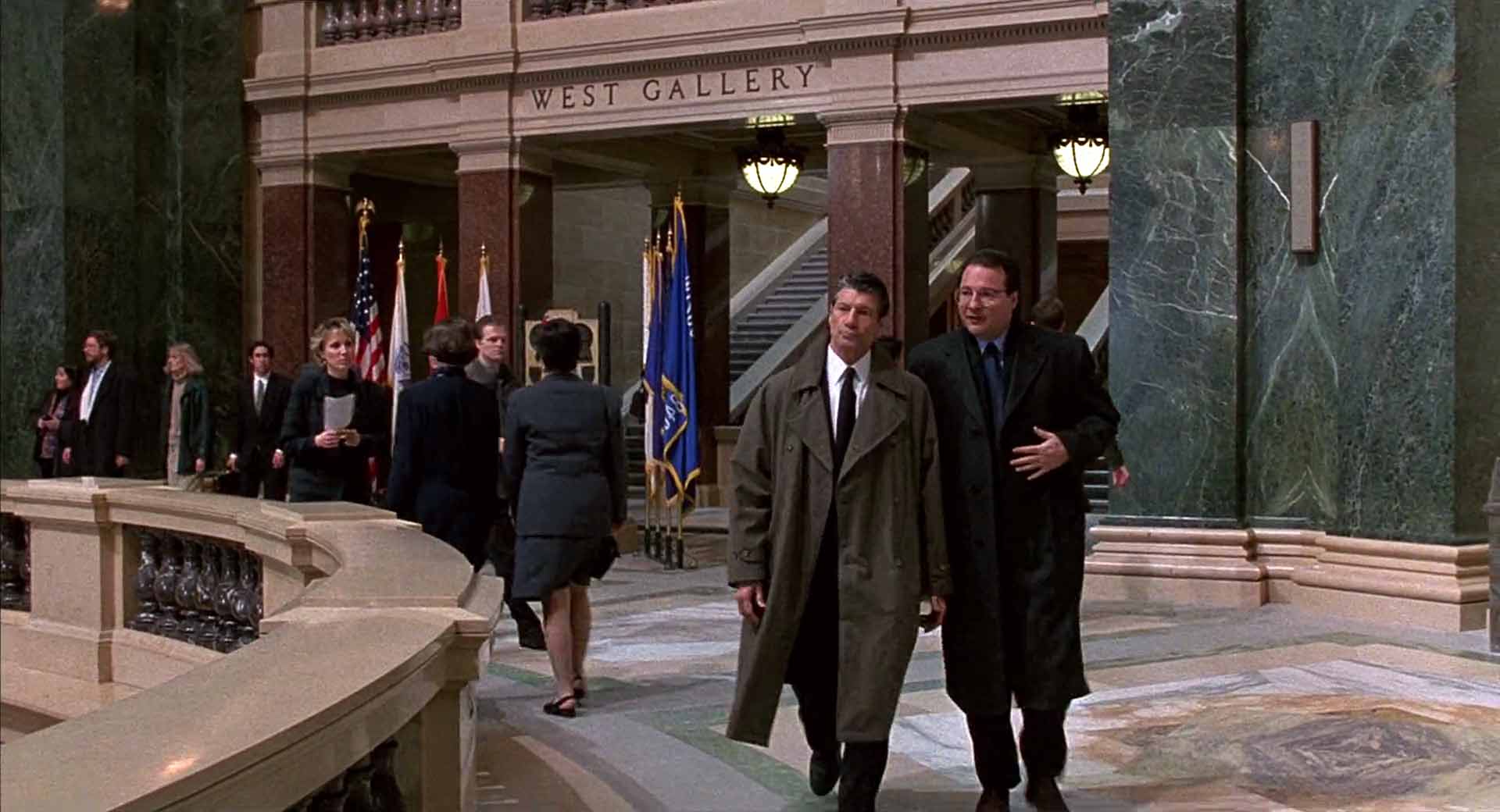 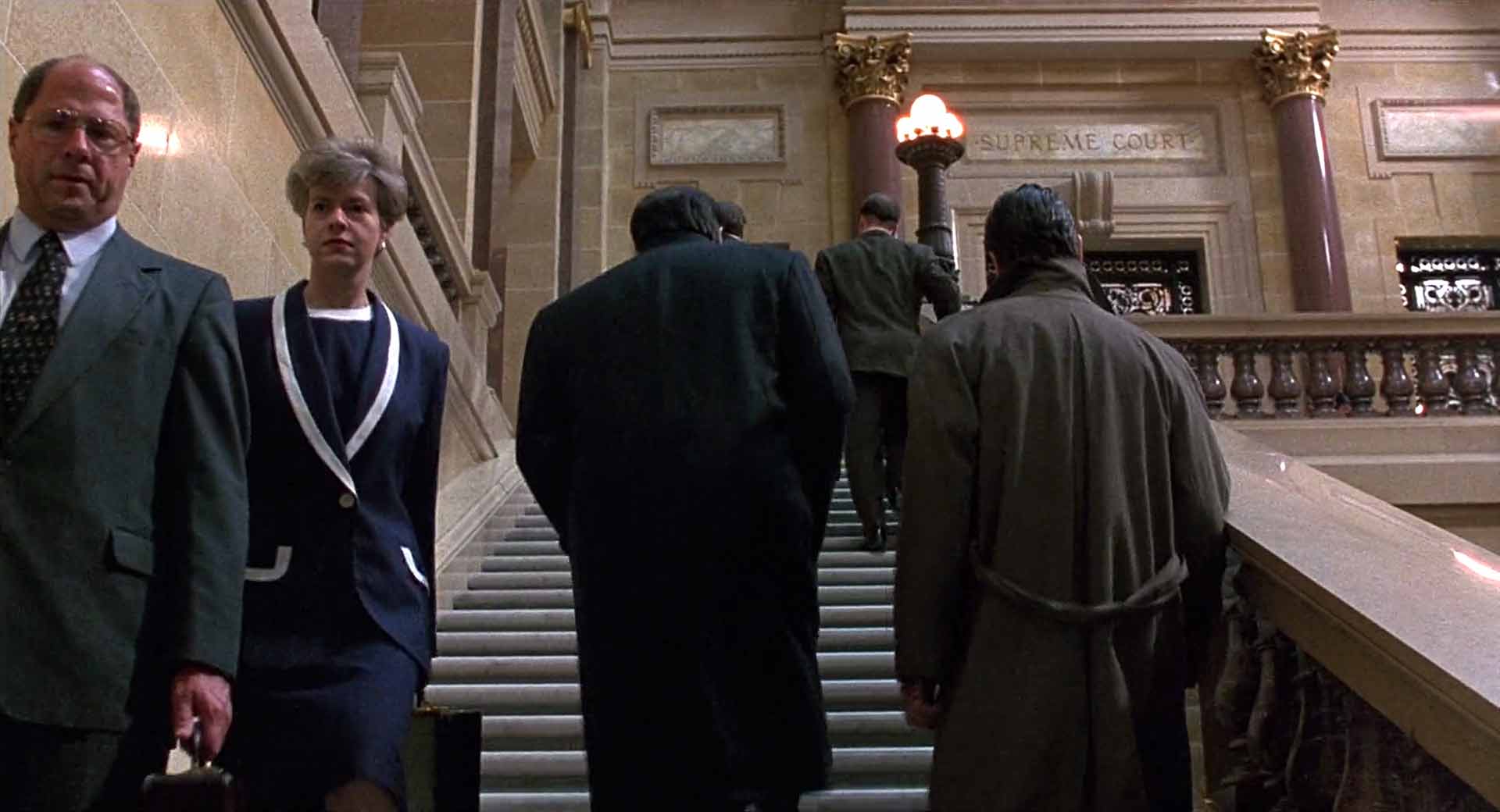 Now we move to another chamber, where a Senate committee grills Dr. Paul Shannon (Freeman), the suspicious head of the university program where Eddie and Lily work. 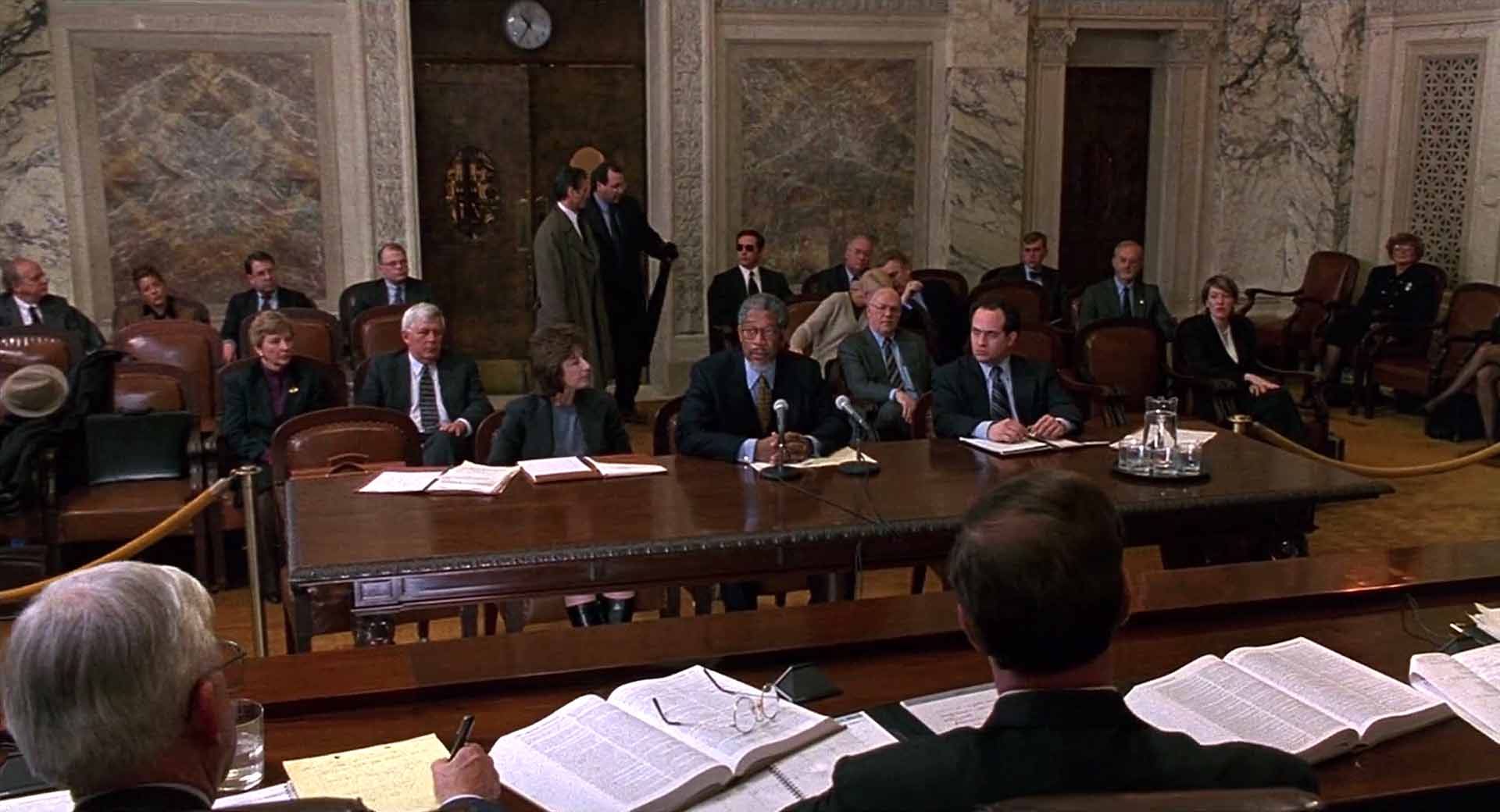 Around the 46-minute mark, we return to Williams Bay/Lake Geneva, where shit gets real. Wisconsin state troopers (and shadowy private security goons) are now chasing Eddie and Lily, having tracked them down to the observatory. 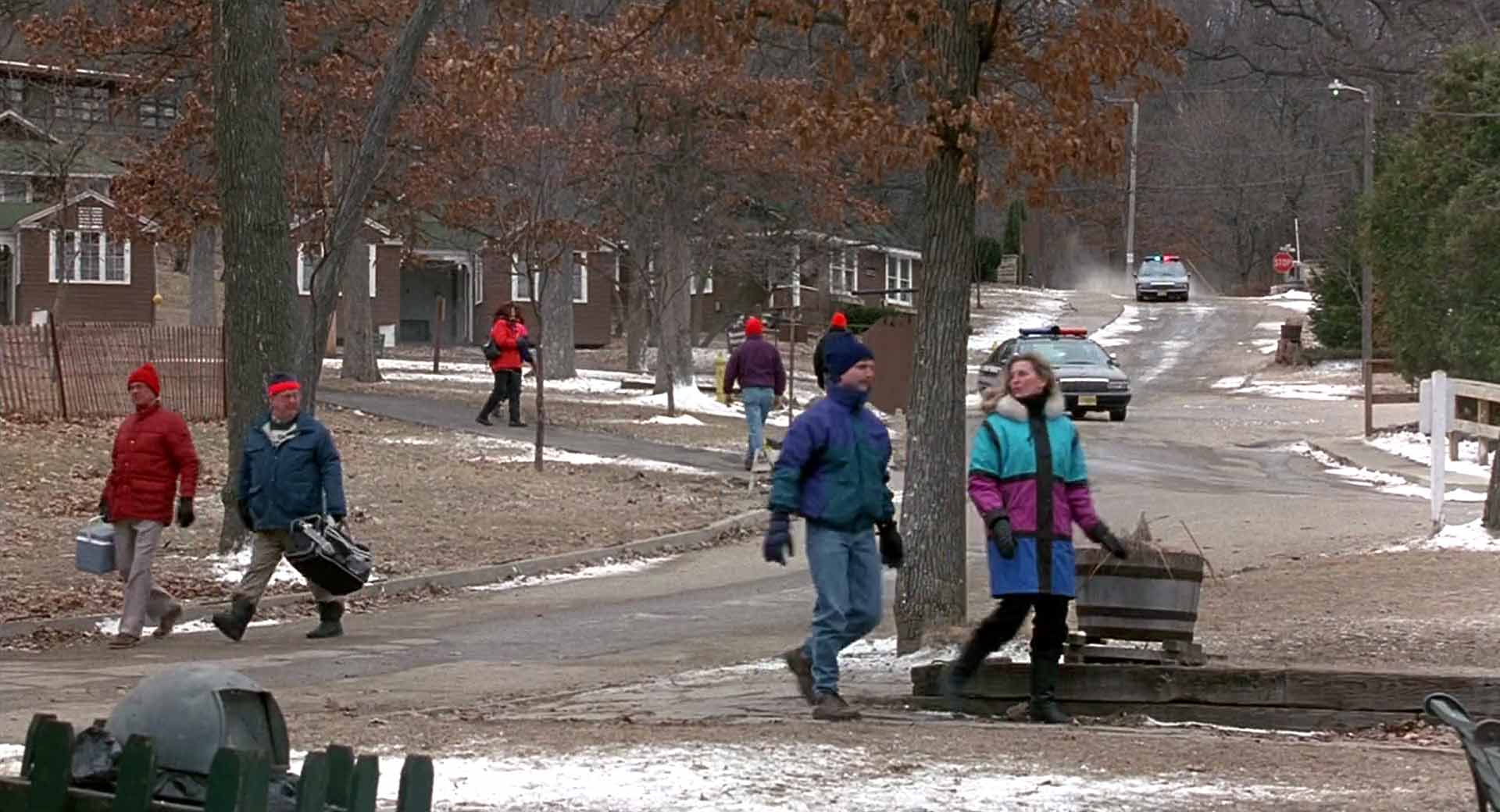 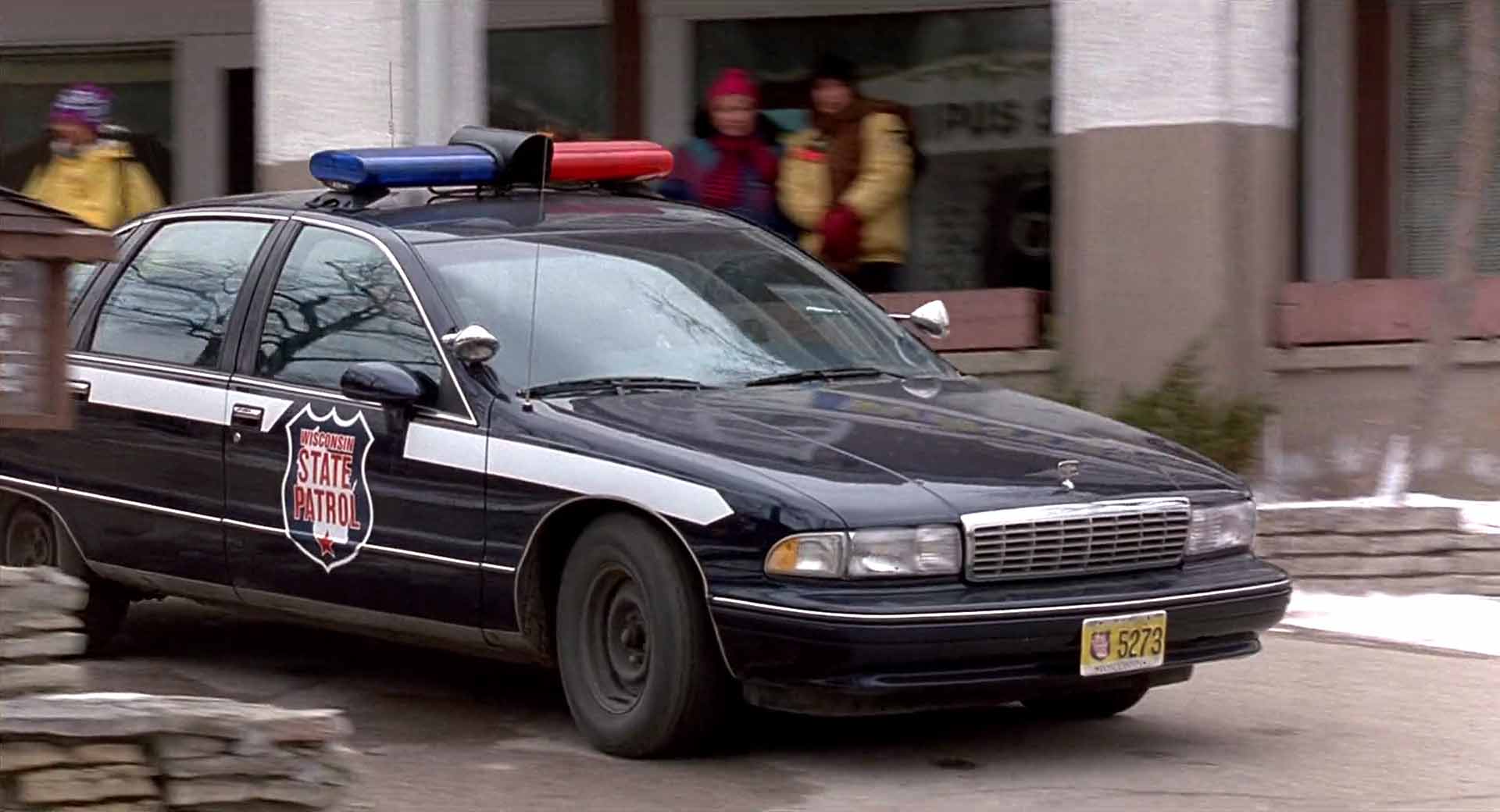 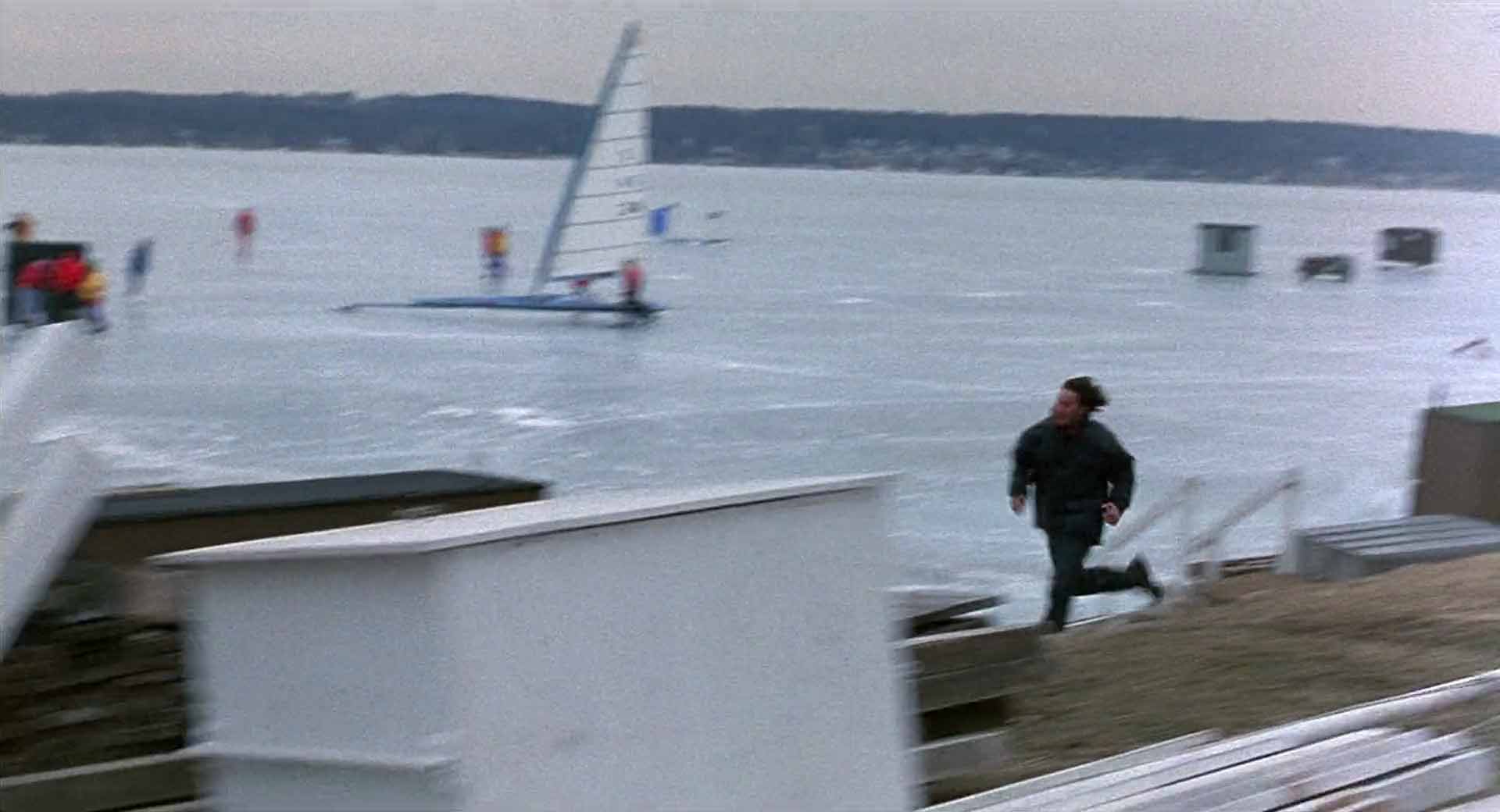 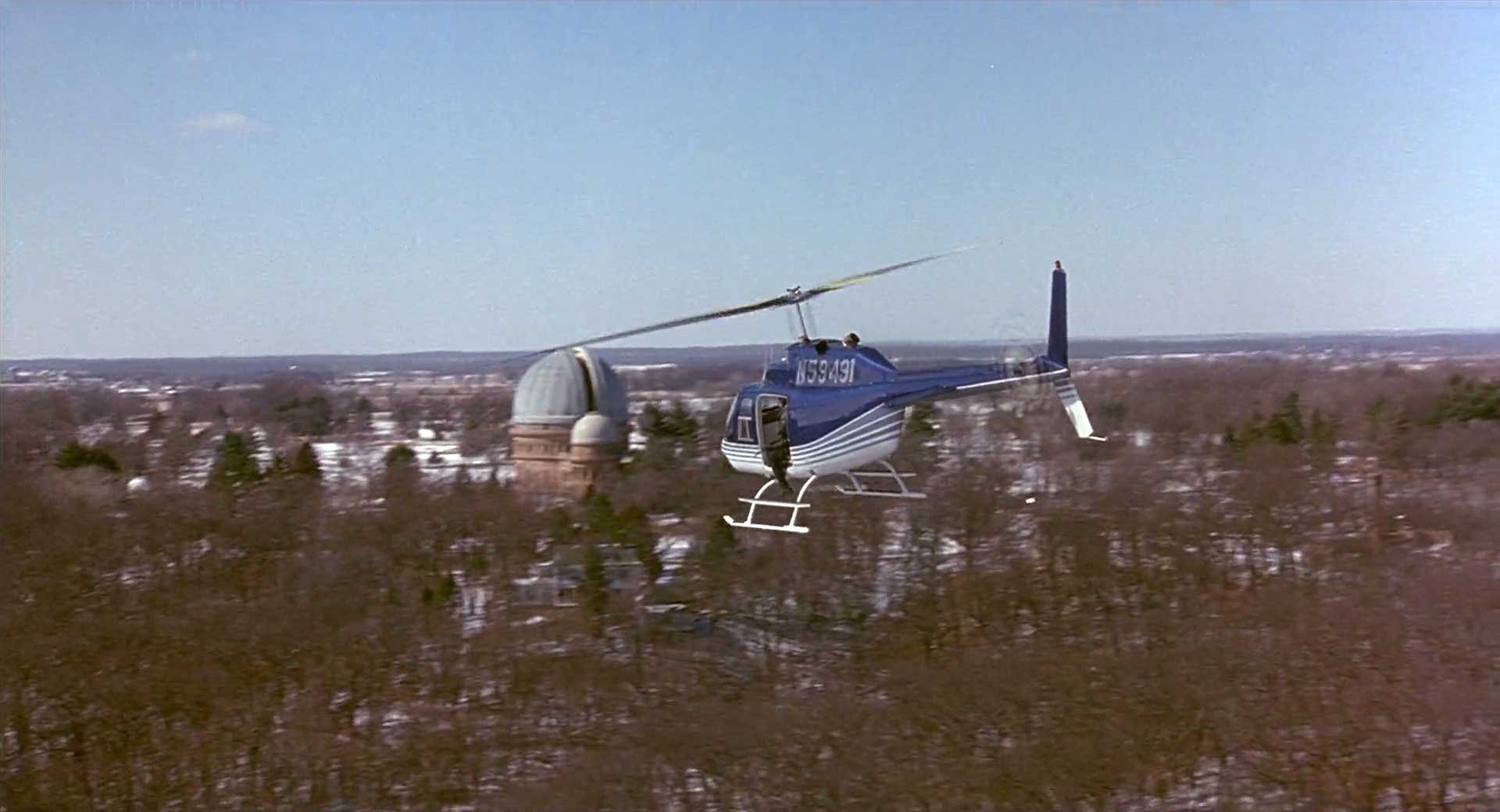 And speaking of Lake Geneva, the picturesque location also serves as the setting for one of the best worst action sequences in film history: a hysterically stupid airboat chase across the icy lake. 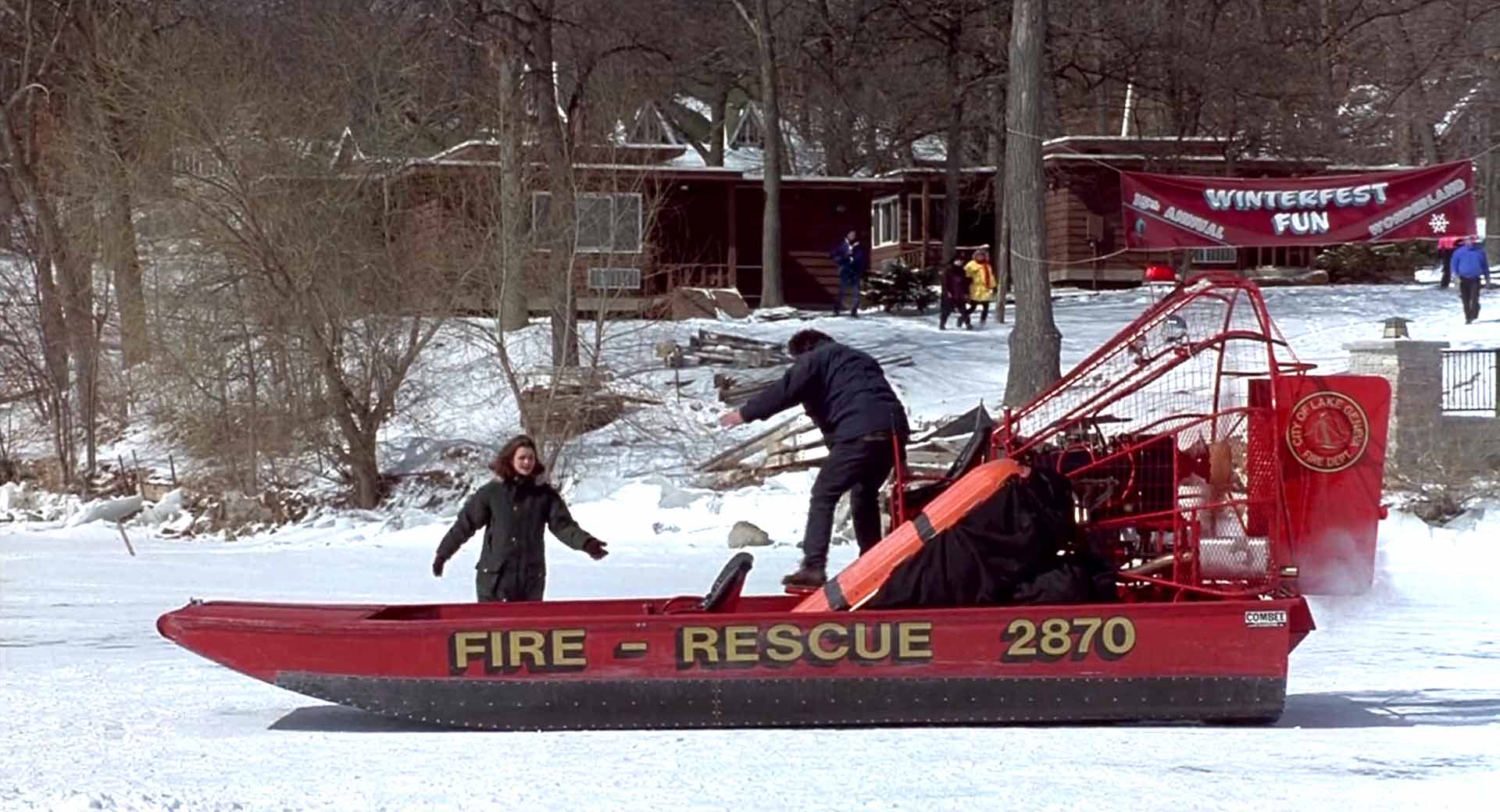 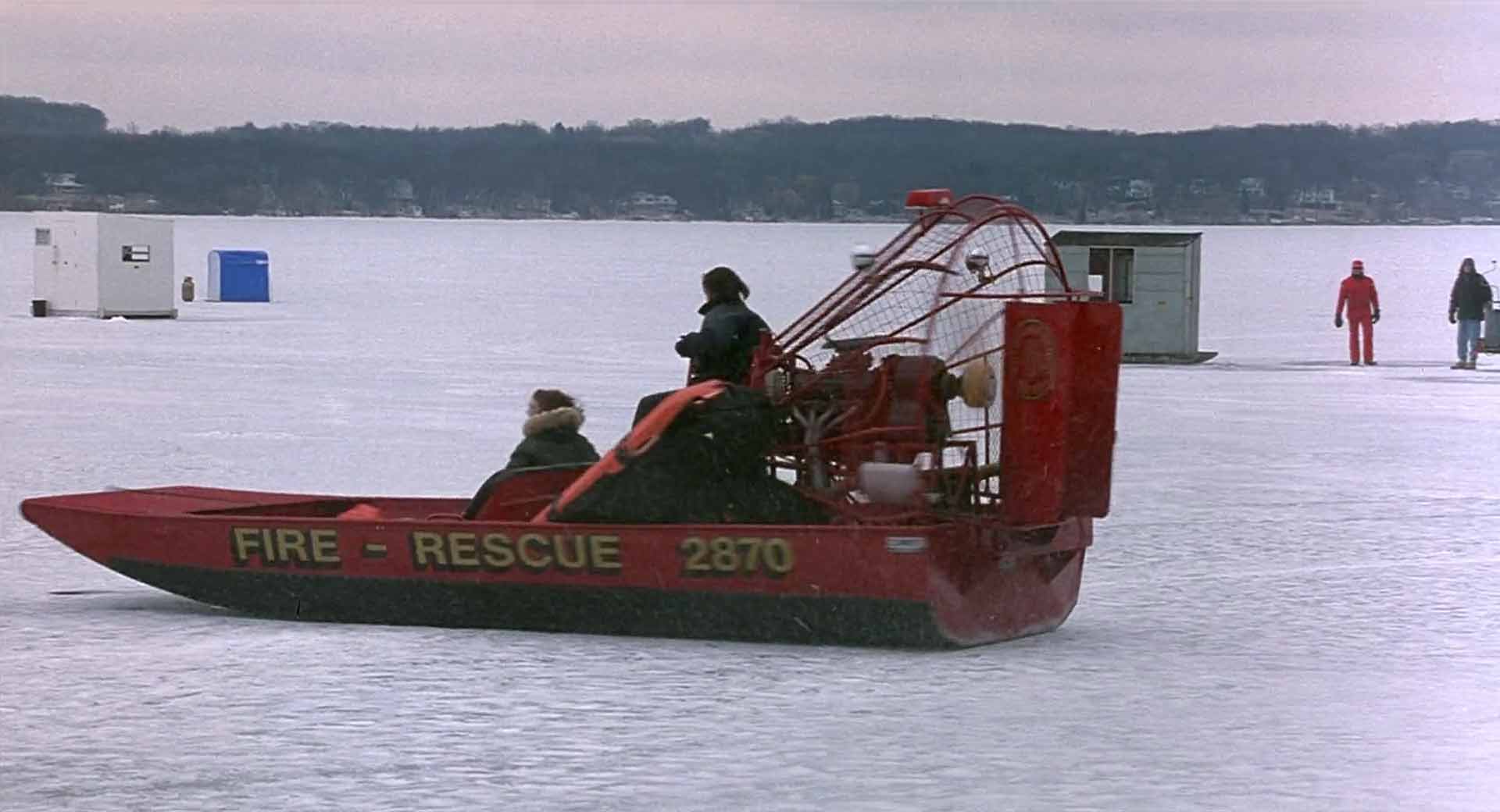 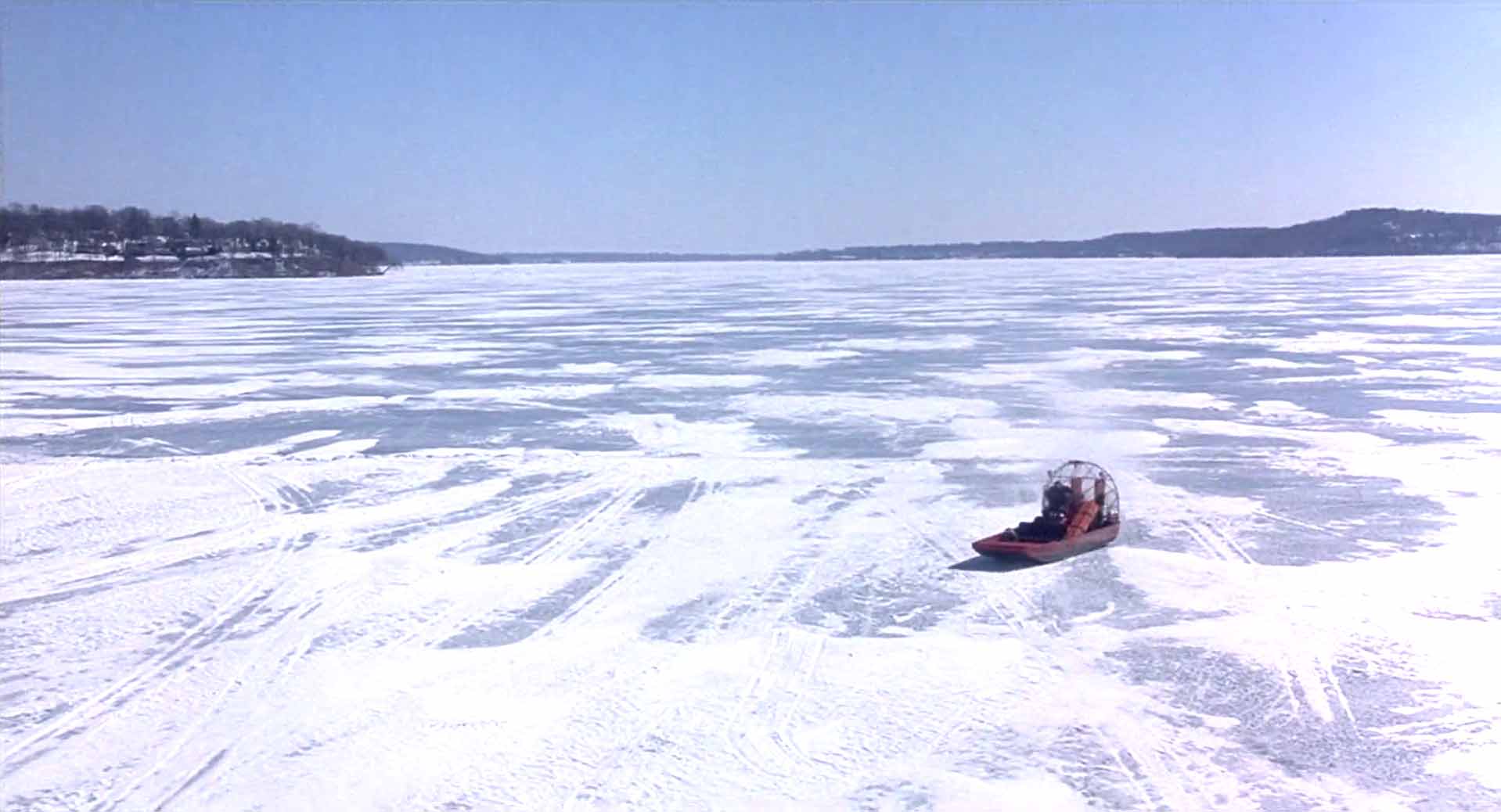 Yep, that’s a damn helicopter chasing the airboat. This world is governed by madness.

The chase is an excellent metaphor for this movie — it constantly goes big and usually ends up failing miserably. Chain Reaction isn’t a great film, and Keanu Reeves was “rewarded” for his performance with a nomination for 1996 Razzie for Worst Actor.

But that doesn’t mean there wasn’t any excitement in the area for the movie. After all, it starred probably immortal action star Reeves and legendary actor (and future noted sexual harasser) Morgan Freeman. Plus director Andrew Davis had just made The Fugitive, one of the most popular films of the era.

Accordingly, Madison Mayor Paul Soglin and his wife Sara treated the trio to dinner at The Blue Marlin. (It later became Hamilton’s on the Square and is now called Boar and Barrel.) The Wisconsin State Journal’s Pat Simms reported that wait staff said the two actors had “impeccable taste in wine.”

And with filming taking place at the Capitol, Chain Reaction also marks the screen debuts of a few Wisconsin politicians. For example, Republican representative Mickey Lehman, who died last year at age 74, is the guy beside Baldwin. Several other current and ex-political staffers also appear. And former Wisconsin State Journal reporter Jeff Mayers (co-founder and current president of Wispolitics.com) even published an article for the paper’s March 3, 1996 edition chronicling his time as an extra in the movie.

Mayers’ charming story starts with his arrival into the world of big-budget movie-making and sees the journalist attempting to navigate it. He finds humor in the rigid scheduling and constant micromanaging of the endeavor. As someone who pretty much hung out in the background, Mayers offered an interesting fly-on-the-wall perspective to the casting of extras. (To spot him, Mayers said to “look for the Jimmy Stewart look-alike in a blue overcoat walking briskly like an important Capitol person in a hurry.”) 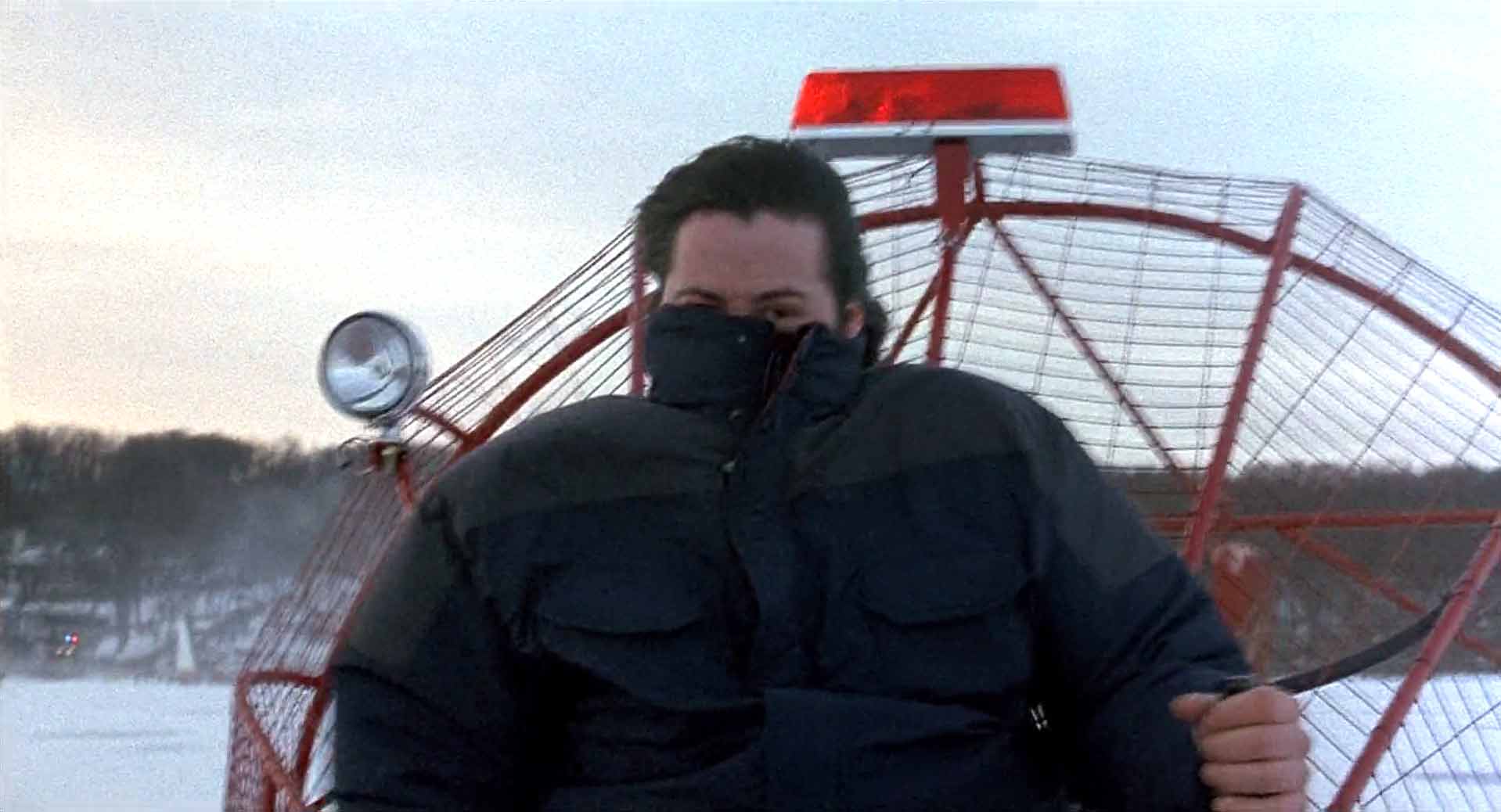 Chain Reaction is not required viewing by any stretch. It’s pretty much The Fugitive but more nonsensically contrived and nowhere near as gripping. In fact, Reeves turned down Speed 2: Cruise Control (and a $11 million paycheck) because he was so worn out by the end of Chain Reaction. And that’s kind of how I felt after watching Chain Reaction: exhausted and unsure when I want to foray back into the world of Big Dumb Movies.

But that airboat chase, though…