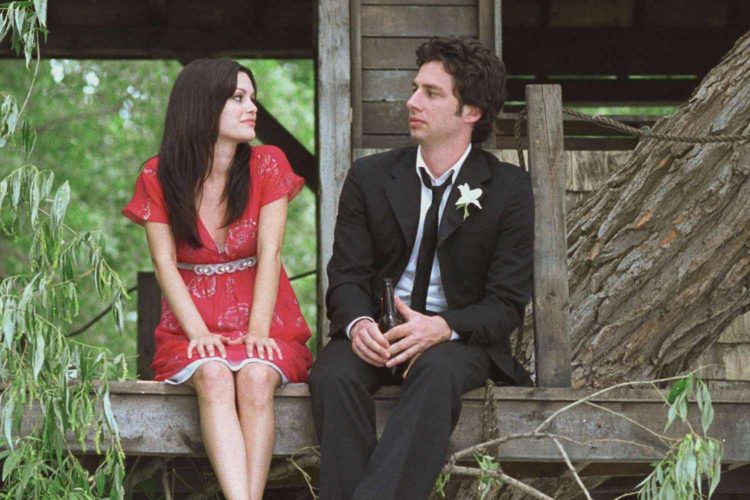 Remember when Zach Braff was a thing? The Last Kiss certainly does. A remake of the Italian film L’ultimo bacio, it was Americanized and reset to Madison by its UW alum producers Tom Rosenberg and Andre Lamal. Released 12 years ago this month, it co-starred Rachel Bilson, Jacinda Barrett, Casey Affleck, Blythe Danner and Tom Wilkinson.

The Last Kiss follows then-Scrubs star Braff as Michael, a young architect about to have a baby with Jenna (Barrett), his girlfriend of three years. But at a friend’s wedding, he meets Kim (Bilson), a bubbly and beautiful UW undergrad. As former students, Rosenberg and Lamal chose to set the film in Madison; for them, it was a place of “familiarity and fond memories.”

“We knew what kind of shots we wanted because we are so familiar with this place,” Rosenberg told NBC15. “So we almost did the scouting trip in our head (ahead) of time and we knew exactly what to do to establish the capital and the University, where we thought it should be.”

They do that early, too. We get our first view of Madison in the opening credits, as Michael and Jenna drive down (a one-way?) Martin Luther King Blvd., with the Capitol in full view behind them. Also, there are so many feet in this scene that you’d think it was directed by Quentin Tarantino. (If that wasn’t already obvious, it was not… The Last Kiss was directed by actor Tony Goldwyn.)

We don’t see Madison again until about a half hour into the film, when Michael knocks off early from architecting to meet Kim at the Memorial Union Terrace. It’s nice to see one of the more cinematic aspects of this city immortalized on film.

At 37 minutes, Anna (Blythe Danner) — Jenna’s mother — meets an old fling on Bascom Hill. And as for the old fling in question… is that something strange in the neighborhood? Nope, just Ghostbusters star Harold Ramis!

Beyond that, we really don’t see much more of our fair city. In fact, most of The Last Kiss was shot in Montréal, Québec. But that doesn’t mean the film went unnoticed, even if the media buzz surrounding it was a bit lighter compared to some of our past entries. I mean, obviously Zach Braff is no Christian Bale.

Unsurprisingly, people lined up for a chance to play opposite generational icons Braff and Rachel Bilson. A June 23, 2005 article in the Wisconsin State Journal detailed dozens of people — mostly young people — showing up in the hopes of being cast as extras.

This is unsurprising. Thanks to his work on Scrubs and with his directorial debut Garden State, which he also wrote and curated the soundtrack for, Zach Braff had become poet laureate for people who overthought everything and actually did have their lives changed by The Shins. And Bilson, best known for playing eternal crush Summer Roberts on The O.C., was making her film debut.

One anecdote from the July 10, 2005 edition of the Wisconsin State Journal detailed a visit Braff and Bilson had with a group of young actors aged 10-17. A group of kids from the CTM Madison Theatre Company apparently encountered the two stars while they were filming at the Terrace, and a group of girls with the group followed Braff to try to meet him.

A brief exchange between a production official and a security guard later, and 40 young Madison actors were getting their own private Q&A with Braff and Bilson. At the time, they were two of the most recognizable actors on TV, and the fact that they actually took time to talk to a bunch of Midwestern kids is pretty cool.

My favorite anecdote, however, involves a local hair artist named Kyle Flanner. He was in charge of styling Braff and Danner for the movie. Apparently, getting Zach Braff to commit to a hairstyle is a daunting task. From the WSJ’s Jan. 30, 2006 edition:

“I told him I was not going to do his hair like it usually is. It’s too bouffant. I said, ‘if my name is going to be in the credits, I can’t have that.’ It took him several days, but I think in the end he forgave me, because he leaped on my shoulders at the post party.”

This is not a very good movie

But perhaps the real truth surrounding the comparative lack of press was more prescient. The Last Kiss was panned by critics, and upon my own second viewing, I wouldn’t disagree. This is not a very good movie. It seems like it exists to capitalize on America’s brief love affair with Braff, in essence ripping off his work in Garden State while stripping all of the nuance that made Garden State charming.

And then there’s the characters. Michael is supposed to one of those likable jerks, but really he’s just a jerk. And Kim is vapid and one-dimensional, seemingly drawn from the worst diary entries of freshman creative writing majors everywhere. Jenna is somewhat more redeemable, but her near-psychotic reaction to Michael’s transgressions contrasts sharply with the fact that she seemed to be set up as the most stable out of the whole cadre.

The Last Kiss tried very hard to be an honest portrayal of post-collegiate malaise, but it’s both overwritten and mawkish. This is no surprise, as screenwriter Paul Haggis (who, like Affleck, is a Very Bad Media Man) once won an Oscar for his mawkish overwriting on Crash. It seems like it was pulled from Noah Baumbach’s garbage can rather than the brain of a decorated writer.

Maybe this should have been a Tarantino film… at least then it would be memorable.