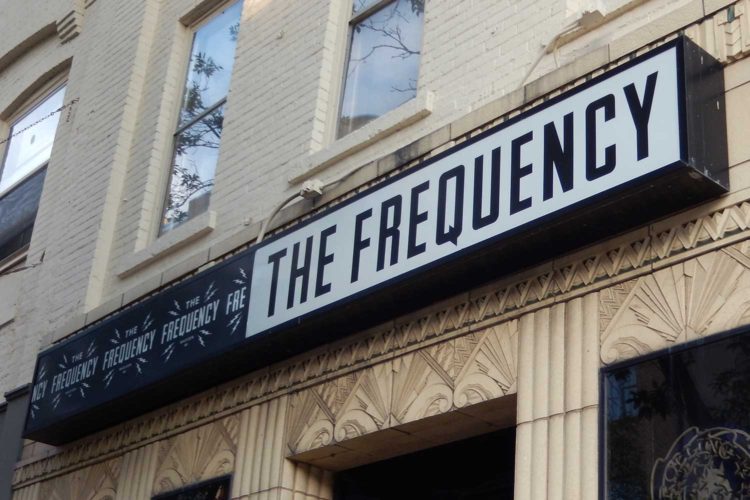 It’s the end of a loud and sweaty era. After 10 years of live music, The Frequency is closing its doors.

On Monday afternoon, the beloved venue’s owners announced on their Facebook page that they will be “placing the concept of The Frequency in storage until further notice,” effective June 30. “Increased costs and low revenue has put us in a position where we need to take some time off to re-evaluate the business as a whole.”

The Facebook post has resulted in an outpouring of memories and thank yous for a venue one commenter called “punk rock Cheers.”

Since it opened in 2008, the small club has been a haven for both local acts and smaller national acts. In addition to hosting early shows by future stars like The Lumineers and Macklemore, it also served as one of the few places local bands could get booked downtown.

Isaac de Broux-Slone, vocalist and guitarist for local power-pop act Disq, looks back fondly on The Frequency as a place for young bands to cut their teeth. Disq is scheduled to play there again May 5.

“I’m so glad to have had a place that was able to help so many young bands develop and get themselves out there,” he says. “I know The Frequency was a really major part in the development of my band, and I’m sure it’s been the same for so many others around Madison.”

Rosalind Greiert, frontwoman of Heavy Looks, echoes the sentiment. She says The Frequency was one of the first venues they played after moving here in 2013. “We were still pretty fresh with our songs and it was an exhilarating experience to play them for a real crowd.”

Speaking with the Wisconsin State Journal, Frequency co-owner Darwin Sampson left the door open for a possible return for the venue, albeit either on the city’s north or east sides, where much of Madison’s artistic community seems to have migrated.

One of that community’s most visible members expresses hope. While Bobby Hussy — leader of The Hussy and Cave Curse, and a member of Fire Heads and probably a million other bands I’m forgetting — is “sad to see another independent venue lost in our town,” he remains positive about the scene’s ability to adapt and survive.

“I hope someone can step up and fill the void. Mickey’s (Tavern) and Crystal (Corner) can’t do it alone,” he says. “I think we need another 150-250 person room with good sound and cheap drinks for the underground scene to thrive. Here’s hoping for that in the future!”

The Frequency will go out in style with a two-night celebration on June 8 and 9 that includes music from favorites like Cribshitter and Cheer Accident.

“It’s really an end of an era for the Madison music community,” says Greiert, “but we are so incredibly grateful to have had The Frequency for as long as we did.”