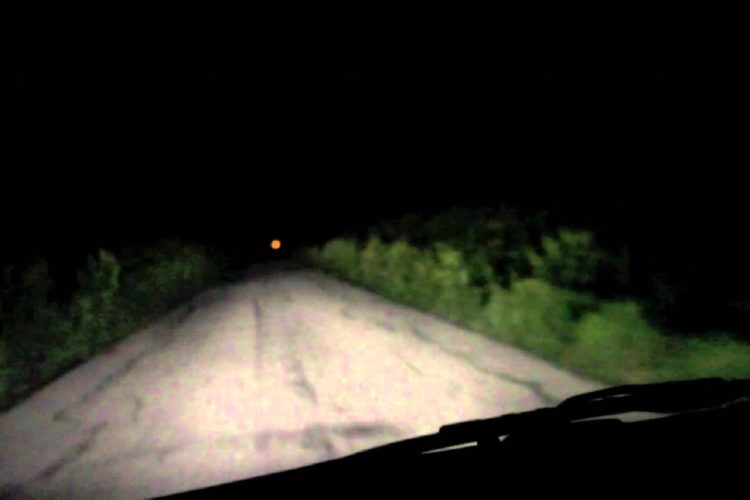 Every region has a ghost story that exists solely to scare the holy shit out of local teens. Growing up in south-central Wisconsin, the story was Paradise Road. Located in the Jefferson area, it looks like any other midwestern country road: two lanes under a tunnel of trees. But once the sun goes down, Paradise is a whole different beast.

According to legend, three sisters once lived in a house on Paradise Road. They were accused of witchcraft and subsequently hanged from the trees on their property. Though not a concrete answer, it’s the most common one when trying to explain the disturbing things you can encounter out there at night. And make no mistake about it, they are quite disturbing.

Not everyone has an encounter on Paradise Road; that is, of course, what separates the Mulders and Scullys of the world. And people will see what they want to see. If they’re familiar with the urban legend, they’re much more likely to experience it in person. But haunted or not, the secluded darkness alone makes it a seriously spooky place. And for those more sensitive to phenomena, experiences range from run-of-the-mill ghost sightings to logic-defying horror.

Like any good scary story, there’s an omnipresent dread in the area. Footsteps seem to follow you everywhere. And the woods get super dark at night. But beyond that, Paradise Road deviates a bit toward some deeply unsettling, Ari Aster-type shit. We’re talking short, robed figures running around in the woods and inhuman, disembodied screams. (One account involves someone being paced by shadows.) One of the more gruesome details involves a spectral, decapitated raccoon with blood that will glisten in headlights.

Incidentally, the witchy imagery recalls the cult Wisconsin horror short Coven, the subject of the essential 2000 documentary American Movie. In it, a young artist is terrorized by hooded figures in robes surrounding his car in a rural area. This is obviously a work of fiction, but given the similarity in subject matter and geographic proximity — Coven was shot in the Milwaukee area, where filmmaker and doc subject Mark Borchardt resides — it’s not a stretch to imagine how the two stories may have influenced each other.

But don’t take it from me, someone whose knowledge comes from witching-hour internet use. My partner (who also gravitates toward the strange and unusual) actually has firsthand knowledge, stemming from when she and a friend went out to Jefferson about a decade ago to put the legend to the test.

“We had been out there a few times, and this was the only time we had any kind of experience,” she says. “We didn’t see anything; we just heard stuff. It was almost like a drumbeat. Spaced out, but it kind of sounded like it was getting closer.”

When the beat sounded like it was right on top of them, they decided to call it a night. But Paradise Road wasn’t finished with them.

“As soon as we put the car in drive to get out of there,” she says, “it sounded and felt like someone or something hit the back of the car.” (And it seems to gel with this account involving a phantom vehicle.)

She’s been back since then, but never experienced anything like this again.

The problem with stories of the unexplained is that there’s only so much mileage you can get out of them. Without any real proof, we’re forced to rely mostly on incomplete, secondhand accounts. But there has been at least one real-life horror story to take place in the general vicinity of Paradise.

It’s a sordid affair that sounds like something out of a Coen Brothers movie. M married her husband, Ruben, less than a year after the death of his first wife. (As far as I know, there’s no relation to American Movie’s Mark Borchardt; it’s just another weird coincidence?) But soon after the marriage took a dark turn, with Diane becoming increasingly paranoid, manipulative and abusive toward Ruben’s two children and Ruben beginning an affair. In their divorce, Diane was ordered to leave their home, and she snapped.

She hired Doug Vest — a teenager at Jefferson High School, where Diane worked as a teacher’s aide — to kill Ruben, whom she said was abusing her. She offered him $20,000, two cars and her wedding rings as payment. Being 17 and hardly a hardened criminal, Vest brought in his delinquent 15-year-old cousin Mike Maldonado and a teen named Joshua Yanke to help him. They killed Ruben with a sawed-off shotgun on Easter morning, April 3, 1994.

And it all occurred at the Borchardt family home on Bear Hole Road, which runs immediately parallel to Paradise. So even though the quartet involved was promptly arrested and charged, they’ll forever be a bloody footnote on a road with an already sinister history.