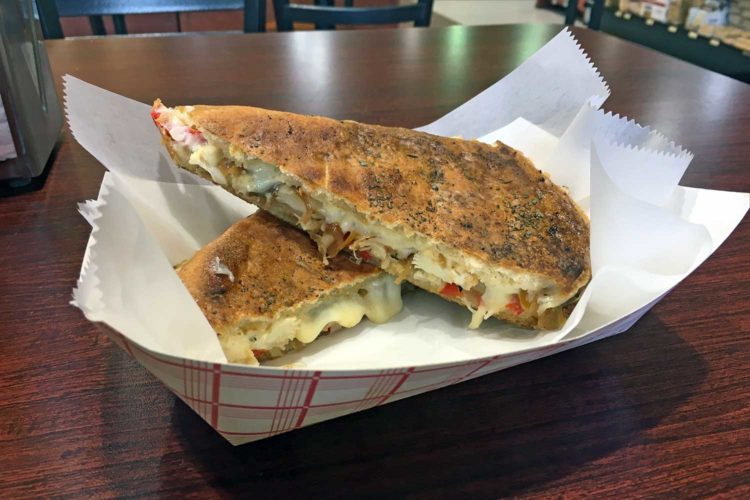 Brennan’s Cellars, a market on the city’s west side, includes its own Smokehouse Cafe, which offers a wide variety of grilled cheese along with hot, pressed and deli sandwiches. Brennan’s claims Madison’s best Cuban, but I wanted to try something new and different. The spicy cauliflower caught my eye: roasted cauliflower, peppers, onions, spicy trinity, hot pepper aioli and quesadilla cheese on a pressed herbed Cuban roll. So off we were on a new adventure.

The Cuban roll was pressed to crispy, crunchy perfection. The herbs added contrast and kept the bread from tasting too doughy.

The roasted cauliflower is what really made the makings. It wasn’t over roasted to the point of soggy, and it balanced out to a hearty flavor with a pleasant kick when combined with peppers, onions, spicy trinity (bell peppers, onion, and celery with Brennan’s spiced twist), hot pepper aioli and cheese.

The bread was a little greasy in part, I think, due to the quesadilla cheese. More melty by nature, the cheese was a little too melty. (I know, I know, too melty is almost sacrilege in Wisconsin.) There were some strings that followed some bites and then didn’t disconnect, making for a little messy experience.

Brennan’s pressed sandwiches check in at $7.99 before tax, without any sides included. It is, however, a rich and hearty sandwich, and I added a side soup and soda for extra and was full the rest of the afternoon.

One of my goals for this quest is to try new and different sandwiches, and Brennan’s spicy cauliflower fit the bill. The cauliflower was a lovely surprise: hearty and well roasted so that it kept consistency and texture to almost feel like you were eating a standard protein. Combine that with great flavoring from the rest of the makings and you have a keeper.