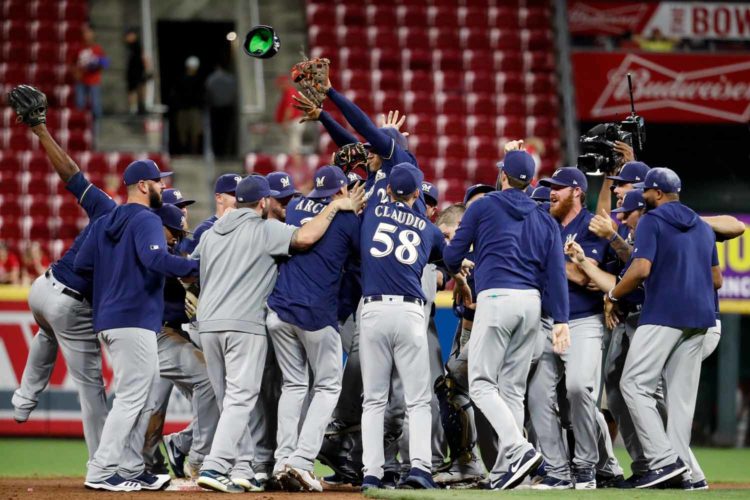 Maybe it was an innocuous observation to note the unrealistic probability.

On Sept. 3, Milwaukee Journal Sentinel sports reporter Tom Haudricourt tweeted this statistic as the Milwaukee Brewers were about to close a quick two-game homestand against Houston:

If you figure it will take 88 wins to get you firmly in the discussion for an NL wild-card berth, #Brewers have to go 18-7 (.720) over their remaining 25 games.

And then, in reference to that tweet, Milwaukee radio host Steve Palec mentioned Haudricourt in a tweet of his own, also noting the difficulty of that task. To which Haudricourt quote retweeted and added, accurately: “Yeah, that’s ‘all’ they have to do. Win every series.”

Yeah, that’s “all” they have to do. Win every series. https://t.co/RsdzmiPYyn

Congratulations, gents. Milwaukee has done exactly that, winning every series even after dropping series openers to division rivals Chicago and St. Louis. Now we get to cue that immortal Jake Taylor quote from Major League:

Since the initial tweet — the Brewers beat the Astros that Tuesday evening — Milwaukee has gone 19-3 during a brutal stretch that gave them just one off-day during the final 25 days of the regular season. They beat Cincinnati on Wednesday to clinch a playoff berth, then swept that series with a win Thursday afternoon.

Sandwiched in the middle of the run was just the minor inconvenience of reigning National League MVP Christian Yelich breaking his kneecap on a fouled-off pitch in Miami, ending his season. Plenty of other Brewers have fought injuries this month, too, including Lorenzo Cain, Keston Hiura and Mike Moustakas. And manager Craig Counsell is somehow effectively working a pitching rotation held together with bubblegum, baling twine and duct tape.

Milwaukee also got hot late last year in its run to the NLCS, as the Brewers went 19-6 over the final 25 games of the regular season and then beat the Cubs in a one-game playoff for the Central Division title. The last time the Brewers made two consecutive postseason appearances was 1981-82.

By the skin of their teeth

Here’s probably the most telling stat about the 2019 Brewers and their end-of-the-season run: Going into Wednesday’s game against the Reds, Milwaukee had a season run differential of zero. Zero. Meaning the Brewers had scored exactly the same number of runs as they had allowed.

But starting with that win against the Astros, the Brewers have a run differential of 117-68 in the last 22 games. That means Milwaukee started this run with a negative-40 run differential.

As of Wednesday, Philadelphia was the only MLB team with a record above .500 and a negative run differential (-20). The Phillies were one game above .500 entering Wednesday. The Brewers were 17. The other eight teams above .500 that haven’t clinched a playoff berth or are still in contention for one of the wild cards had an average run differential of plus-123.

That they’re doing it this year without Yelich — who was having another MVP-caliber season — and the other injuries is remarkable. The fact that they made it this far by the skin of their teeth is even more amazing.

A second consecutive deep playoff run might be too much to expect given all those circumstances. But Thursday’s win also moved Milwaukee to only one game back of St. Louis for the division lead, meaning the door is still open for another Game 163. Even Haudricourt circled back nicely on the day the club announced Yelich’s season was done:

This apparently is how the #Brewers roll. Tread water for five months and then swim like Michael Phelps in the sixth.

Well then, I guess there’s only one thing left to do…
Baseball, Christian Yelich, Milwaukee Brewers, MLB, Sports