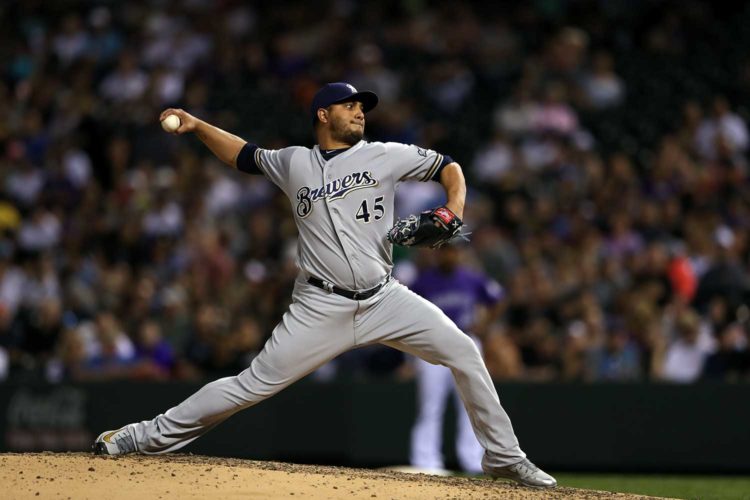 After falling painfully short of the World Series, the Milwaukee Brewers’ fanbase can’t help but have higher expectations heading into next season. But is it reasonable to hope for a 2019 playoff berth? Let’s all gather around now — closer, yes, that’s it — and stay warm in these, cold, baseball-less months with an exercise in imagining what it would take for the towel-waving to resume at Miller Park next October.

But first, a little about my, uh, expertise as a baseball writer. I am a well-informed baseball nerd who reads Fangraphs over my morning coffee, but as a lifelong Seattle Mariners fan, it feels a little dirty to be writing about another team. As I’ve recently discovered, however, there’s more crossover appeal between the Brewers and Mariners than you’d probably expect.

After all, the Brewers franchise started in 1969 as a West Coast expansion team called the Seattle (!) Pilots. Plus, they rock dark blue home jerseys, have M’s on their hats, and play in stadiums with retractable roofs because they’re located in places where shitty baseball weather usually extends well into May. The Brewers have even been identified by MLB Trade Rumors as a potential trade partner for Mariners ace James Paxton, which, for a Seattle devotee like me, would feel like getting kicked directly in the nards. What’s not to like?

The point is that I have no rooting interest in the sustained success of the Milwaukee Brewers, but maybe that’s better for the purposes of this article. This is cold, hard analysis, folks.

So, what got the Brewers to the playoffs in the first place? Good question! It’s lazy to point to last offseason’s major acquisitions — outfielders Christian Yelich and Lorenzo Cain — and stop there. But those moves immediately catapulted the Brewers into contention, at least on paper, and they both worked out better than anyone could have predicted. It helped that the breakout season long expected from Yelich finally happened in a big, big way; he basically hit like Mike Trout after the All Star break.

Obviously, Yelich is not Trout, and it’s unreasonable to expect him to maintain that level of production. But he is a bonafide star in his prime, a franchise cornerstone-type player who won his second Silver Slugger Award last Thursday and appears poised to take home the National League MVP. Playoff teams don’t necessarily need this type of star power, but it certainly doesn’t hurt the Brewers’ chances of a repeat.

As for Cain, he’s a 32-year-old centerfielder whose value is based largely on baserunning and defense. As his speed diminishes, likely so will his production. The Steamer projection system forecasts 3.7 wins above replacement (WAR) from Cain in 2019. That’s two wins short of his All-Star performance in 2018, but he’s beaten the projections before. My gut tells me the drop off won’t be that significant, but even if it is, the Brewers still have an absolutely electric center fielder.

Milwaukee’s starting rotation never looked great on paper; Jhoulys Chacin and Chase Anderson were the Brewers’ only regular starters who managed sub-4.00 ERAs, aside from free agent Wade Miley, and Brent Suter underwent Tommy John surgery and will sit out the entire 2019 season. And while leaning heavily on lights-out relievers such as Josh Hader and Corey Knebel is a proven model in the playoffs, it’s not such a great strategy over the course of a 162-game season. Like Cain, it’s fair to expect some regression from Hader, but we’re talking about one of the top five relievers in baseball. Even if he takes a step back, the Brewers have a serious late-innings weapon.

Looking around the division, the NL Central is wide open. The Chicago Cubs, crippled by an inability to internally develop quality pitching, have failed to become the dynasty many expected following the team’s 2016 World Series victory. The ever-competitive St. Louis Cardinals are reportedly making a push to sign free agent outfielder Bryce Harper, which would instantly change the landscape of the division but is far from being a certainty. The Pittsburgh Pirates look like a .500 team spinning its wheels, despite a more than solid 42-31 record after July 8. As for the Cincinnati Reds, well, let’s just say they’re banking on that loaded farm system paying dividends sometime around 2021.

So, it’s easy to imagine a few things breaking right and the Brewers returning to the playoffs in 2019, and anything can happen once a team is in the tournament. If the team’s brass wants to maximize their chances of repeating last season’s success, they’re going to need a more complete starting rotation. In short, the Brewers absolutely should be trying to shore up the bottom of the roster and also acquire a top-of-the-line starter such as Paxton, even though it would make me hunch over in horrible pain. And possibly toss my cookies.