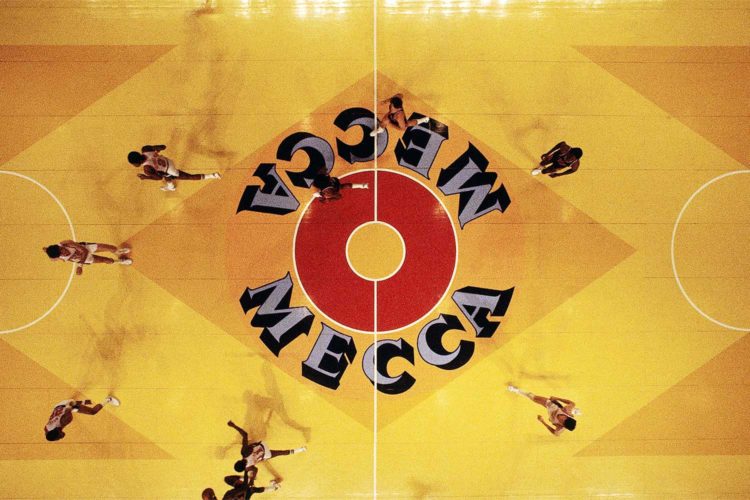 This is the final season for the Milwaukee Bucks at the BMO Harris Bradley Center, and it’s also the franchise’s 50th season. So before moving next year to the palatial new Wisconsin Entertainment and Sports Center (soon to be Foxconn Center?), it only makes sense for the Bucks to return one presumably last time to their first home: the UW-Milwaukee Panther Arena, formerly known as the MECCA, or the Milwaukee Exposition, Convention Center and Arena.

On Thursday night, the Bucks will take on the reanimated corpse of the Boston Celtics in a one-off at their old place, and they’ll be doing it in style. Besides playing host to some of the best teams the Bucks have ever fielded, it also had the coolest floor in the history of the NBA, a replica of which will be used on Thursday.

The floor was designed by revered pop artist Robert Indiana (creator of the ubiquitous “LOVE” image that appears in several cities around the globe and as a picture frame in your freshman R.A.’s dorm) and it was unlike anything previously seen in basketball. In keeping with Indiana’s personal style, the floor featured basic yet contrasting colors that looked jarringly strange on TV, let alone for the players running around on it.

“It was amazing how many times we got opposing players to step out of bounds or stay in the three-second lane,” said former Marquette point guard and current Los Angeles Clippers coach Doc Rivers in ESPN’s 2014 “30 for 30” documentary short MECCA: The Floor That Made Milwaukee Famous, which is embedded below. “That court did that to you. It was a true home court advantage.”

“Home court advantage” is a bit of an understatement. In the 20 years the Bucks played at the MECCA, the team won its division a staggering 12 times, including two conference championships and a 1971 league championship. But since moving to the opulent Bradley Center in 1988, the Bucks have barely been able to win a single playoff series.

Things seem to be looking up, though. The Bucks are 3-1 in this young season, and Giannis Antetekounmpo is a front-runner for league MVP, averaging a mind-boggling 36.8 points and 10.8 rebounds per game so far. In fact, things haven’t looked this bright for the team since before Ray Allen was jettisoned to Seattle for an aging Gary Payton and a few other spare parts. So it only makes sense to come full-circle with a return to the MECCA and its weird-ass floor.

And believe it or not, the original hardwood still exists and was gathering dust in a Kansas warehouse until Bucks fan Andy Gorzalski saved it in 2010 via a cool $20K credit card transaction. His desire to keep an integral part of Milwaukee’s history in Milwaukee makes for a fascinating watch if you’ve got an extra 15 or so minutes to spare.